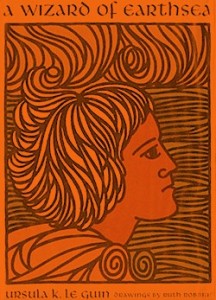 Spoiler Alert * This week we look at chapters 6 and 7 of Ursula K. Le Guin’s A Wizard of Earthsea.

These two chapters encompass the heart of Ged’s journey In the beginning, he is fleeing for his life, searching for some way to fight off the shadow beast while at the same time trying to outrun it.  He learns at the end of six that he cannot escape, while tragically the thing knows his name.  Once again Ged is stripped of his powers and he flees up a mountainside to a remote castle.  Occupied by a witch and a sorcerer, the two have designs to use Ged as a vessel for another great evil.  Realizing almost too late, he escapes as a falcon and finds his way to Ogion.  His old master convinces Ged that it is useless to run and he must confront the shadow, as Ged is the only one who can defeat it.

I think that this is the first true time, at the finale of this chapter, that Ged acts as a hero.  His other choices were made as a reaction to outside stimuli: he sought out the dragon because he needed to flee the islands while ensuring their safety;  he searched for a way to defeat the shadow instead of confronting it.  Ged has finally learned in seven that he must take action, not simply be guided by the shadow’s trickery.

Ged’s adventure as a falcon greatly intrigued me, as it resonates within all of us as a desire to do what we want instead of what is needed of us.  Ged had, as a youth, longed for the days of flying like an eagle.  When he performs this feat to escape the stone’s guardians, he almost loses himself in the experience.  How often have we known what what we should be doing, but instead do the opposite?  And how often do we lose sight of our true purpose because we have allowed ourselves to become distracted?  Ged was almost lost to his falcon form just as we are in danger of losing ourselves, either in hubris or panic, until a voice calls to us from beyond ourselves and pulls us back.

Again, thank you for joining me this week, and I look forward to our discussion!

2 comments on “A Wizard of Earthsea Read-Along Part 3”