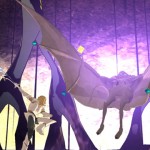 CNN is reporting the impending North American release of El Shaddai, the video game. No, it’s not based on Amy Grant’s old song, but on the biblical figure of Enoch (Genesis 5.21-24; Hebrews 11.5-6; Jude 14-15), who also takes center stage in several apocryphal texts. In the Bible, Enoch is most remembered for being one of two people who never died: God took him, alive, to heaven. (Pop quiz: Can you name the other?) Outside Scripture, Enoch receives “a series of revelations… on the origin of evil, the angels and their destinies, and Gehenna and Paradise” (John Bowker, ed., The Oxford Dictionary of World Religions, 1997, p. 315). (Unique among Christian traditions, the Ethiopian Church grants 1 Enoch canonical status.)

In the game, players attempt, as Enoch, to keep fallen angels from destroying the world. Shane Bettenhausen of Ignition Entertainment, makers of El Shaddai: Ascension of the Metatron (gotta admit, one of the coolest subtitles ever), hopes believers won’t offended but intrigued, and will investigate the texts starring Enoch. “We felt most Christians in the Western world don’t know this story,” he said (I’m willing to bet he’ s right, since many Americans can’t even name the Bible’s first book). “Everything biblical [has been] off-limits [to entertainment developers] unless you are trying to make something didactical.” (Bet he’s looking at you, Chick tracts.)

What do you think? Will you be grabbing El Shaddai for your gaming platform, or do you think the biblical universe has been largely “off-limits” to gamers for good reason?

Personally, I don’t find the idea of El Shaddai offensive, but I wouldn’t want to become a “stumbling block” (1 Cor. 8.9) to Christians (or Jews or Muslims, for that matter–Enoch remains revered in those traditions, too) who do. I also don’t feel any great urgency to educate the masses about Enoch. As Christians, we’ve been commanded to share good news about a far more important biblical figure! Even if I did, I doubt an action-packed video game would do the trick.

(Besides, in all honesty, I’m no gamer. I doubt I’d make it past El Shaddai‘s first level. I’ll just stick with “Words with Friends.”)

4 comments on “In “El Shaddai,” it’s Game Over for fallen angels”