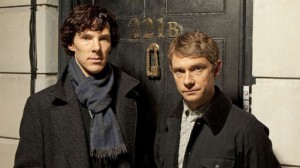 He’s not technically a science fiction or fantasy character (although his mental prowess at times seems otherworldly), but Sherlock Holmes has often drawn fans from our favorite genres. Isaac Asimov was, arguably, the most notable sci-fi Sherlockian. Lieutenant Commander Data runs a close second.

Steven Moffat and Mark Gatiss (current head writer and recurring writer, respectively, for “Doctor Who”) also rank high on that list, having co-created “Sherlock,” BBC’s smart, entertaining, modern take on Holmes and Watson’s adventures. Martin Freeman, who plays Watson, is also, of course, starring as Bilbo in Peter Jackson’s Hobbit films; Benedict Cumberbatch, who plays Holmes, will be voicing the dragon Smaug–further genre connections! The first season of “Sherlock” aired in the States on PBS last spring, and is currently available on home video.

As Newsarama reported, Gatiss recently announced that the show’s second season is ready to go before the cameras. Scripts will draw on three of my favorite tales from “the Canon” for inspiration: “A Scandal in Bohemia” (best remembered for introducing Irene Adler, the only woman who ever bested Holmes–“The Woman,” he reverently called her); The Hound of the Baskervilles (the third Holmes novel and one of the most popular detective stories written); and “The Final Problem” (in which–spoiler alert!–Holmes and his arch-nemesis, Professor Moriarty, apparently perish in mortal combat).

No word on broadcast dates yet. While we wait, who else are the “sci-fi Sherlockians” among us? Which stories would you like to see Moffat and Gatiss tackle in “Sherlock,” season 3 (if we’re lucky)?

And–given the TARDIS’ penchant for materializing in the lives of such noted British authors as Charles Dickens and Agatha Christie–who else votes for Moffat to make the Doctor pay a visit to Sherlock’s creator, Sir Arthur Conan Doyle?