Paul’s admonitions to the Corinthians offered a valuable starting point as I thought about whether and how Christians can celebrate Halloween. Like modern American culture, the culture of first-century Corinth was filled with customs and conventions that could become stumbling blocks for followers of Jesus. Corinthian Christians simply could not completely avoid possible conflicts of interest.

Not even the dinner table was safe! Much of the meat available in the marketplace was “leftovers” from sacrifices offered to pagan gods. “For that reason,” explains N.T. Wright, “some Jews in the ancient world, in places where they couldn’t or didn’t have a butcher of their own, refused to eat meat at all. They didn’t want to be involved, even at one remove, in the worship of idols… They knew, after all, that there was one God, and only one” (Paul for Everyone: 1 Corinthians, Westminster John Knox Press, 2004, p. 98).

Christians, too, believed in only one God. Some Corinthian Christians decided meat offered to make-believe gods was no different from other meat. They ate meat from the marketplace, as well as meat served in non-Christian settings, with a clear conscience, free from religious dietary restrictions. Paul granted these believers’ point was theologically sound. He gently reminded them, however, “It is not everyone… who has this knowledge” (1 Cor. 8.7).

Whatever its origins in ancient Celtic practice, I don’t believe most Americans today celebrate Halloween with any religious intent. It’s no longer a Druidic effort to appease the ghosts of the dead. Any element of predicting the future that Samhain once included has long since been reduced to party games. When I watch the ballerinas and blood-sucking vampires, the football players and fairy princesses, the zombies and zebras and all the rest marching from house to house, I don’t see children impersonating evil spirits: I see them innocently indulging the impulse we all have to imagine ourselves as someone or something else. It’s hard for me to see anything sinister in Halloween as most people observe it; it’s harder still to imagine that, aside from devoted Wiccans or other neopagans, Haoween holds religious significance for anyone (even Wiccans often celebrate Samhain apart from October 31, “because of the interruptions from ‘trick or treaters’”). Halloween today intentionally celebrates fantasy where ancient sacrifices of meat to idols unintentionally did so, yet both revolve around make-believe.

I do appreciate that not all Christians share my point of view. I’m no apostle Paul; I don’t think those who disagree with me are “weak believers” (1 Cor. 8.11). (Ever get the feeling that Paul, for all his pastoral and theological genius, might have been a hard guy to like?) But I affirm they are brothers and sisters “for whom Christ died” (8.11). Were Paul to render judgment on Halloween, he might write to us, “If trick-or-treating is a cause of their falling, I will never trick-or-treat, so that I may not cause one of them to fall” (see 8.13).

Paul didn’t just write about love (1 Cor. 13)—he lived it. If exercising his Christian freedom might impede another Christian’s growth in faith, Paul held back. I think he’d advise us to do the same in cases where we knew our observance of Halloween would shake a brother or sister’s confidence. As Paul stresses throughout 1 Corinthians, our primary concern is to use our spiritual gifts for “building up the church” (14.12), and the greatest gift we’ve been given for doing so is love (13.13).

But was there no positive, distinctively Christian way to enjoy Halloween?

As much as I was convinced my approach to the holiday was all in good fun, I couldn’t deny that some people use Halloween to dwell on all that is darkest in the world and in ourselves: 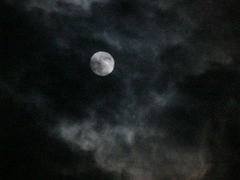 And I had another hesitation. While I don’t believe Halloween’s iconic characters are real—monsters and mummies, witches and werewolves and whatnot—I have always enjoyed the way they symbolize Halloween’s liminal quality. Halloween suspends us, Twilight Zone style,“between light and shadow,” inviting us to peer into the “thin places” of the world to see that, as Hamlet told Horatio, there are more things in heaven and earth than we dream.

Halloween is about having fun as you feel what Arnold Lobel’s beloved characters Frog and Toad call “the shivers”:

Frog and Toad sat close by the fire.

The teacups shook in their hands.

They were having the shivers. It was a good, warm feeling.

But the Bible doesn’t seem to allow for “the shivers” as a source of fun. God’s Law treats the supernatural realm as quite real, and warns God’s people against actively seeking contact with it (e.g., Deut. 18.9-14). And on the first Easter evening, when Jesus’ disciples mistakenly thought the risen Lord was a ghost, they felt no “good, warm feeling”—they were “startled and terrified” (Luke 24.37).

And why not? One memorable “ghost story” in Scripture connects such apparitions with decidedly bad news for mortals. In a misguided attempt to comfort Job, Eliphaz shares this spooky tale:

Amid thoughts from visions of the night, when deep sleep falls upon mortals, dread came upon me, and trembling, which made all my bones shake. A spirit glided past my face; the hair of my flesh bristled. It stood still, but I could not discern its appearance. A form was before my eyes; there was silence, then I heard a voice: “Can mortals be righteous before God? Can human beings be pure before their Maker? Even in his servants he puts no trust, and his angels he charges with error; how much more those who live in houses of clay, whose foundation is in the dust, who are crushed like a moth” (Job 4.13-19).

Eliphaz’ spectral guest tells him God doesn’t hold even the angels blameless—and we’re no angels! What possible hope do we have, then, of getting right with God, of finding forgiveness for sin and a chance at a holy life? According to this Scriptural spook, none! Sin, death, the Devil, hell—this ghost’s appearance suggests that the very real forces actively opposed to God’s good will for us and for the world reign supreme. No wonder Jesus’ disciples panicked!

Trembling Not for the Prince of Darkness

Thankfully, Eliphaz doesn’t get the last word on God (see Job 42.7). Only God gets the last word on God, and God’s Word is grace: “For by grace you have been saved through faith, and this is not your own doing; it is the gift of God—not the result of works, so that no one may boast” (Eph. 2.8-9). That proclamation in Ephesians sums up the insight that animated the Protestant Reformation—and it was none other than Martin Luther who showed me a way forward in my theological thinking about Halloween.

The third verse of Luther’s famous hymn “A Mighty Fortress is our God” contains this stirring promise:

And though this world, with devils filled, should threaten to undo us,

We will not fear, for God has willed his truth to triumph through us.

The Prince of Darkness grim, we tremble not for him;

His rage we can endure, for lo! his doom is sure.

One little word shall fell him.

That “little word” is, I think, the name of Jesus, God’s Word made flesh, who suffered death in the flesh “so that through death he might destroy the one who has the power of death, that is, the devil, and free those who all their lives were held in slavery by the fear of death”—that is, the likes of you and me (Heb. 2.14-15). Jesus’ death and Resurrection mark God’s great triumph over all forms of evil and darkness.

The Easter song of “Alleluia” belongs on Christians’ lips all year long, including at Halloween. Why do we need to be afraid of the dark? What do we have to fear from the grave that has been cheated of its ultimate victory, or death that has been robbed of its final sting? Why should we, who are “in all things… more than conquerors through him who loved us,” tremble even for the Devil himself (Rom. 8.37)?

What a happy coincidence that Luther nailed his 95 Theses to the the church door in Wittenberg on October 31, 1517! The boldness of this man who clung so fiercely to God’s grace and whose faith in the Savior’s sufficiency led him (so it’s said) to throw inkpots at the Devil can inspire us, I suggest, to face and even to celebrate Halloween unafraid.

The psalm-singer tells us, “He who sits in the heavens laughs; the Lord has [his foes] in derision” (Ps. 2.4)—all foes, human or demonic. Jesus Christ is risen! The days of sin, evil, and the Devil are numbered. The “strong man” has been bound, definitively and irrevocably (see Mark 3.23-27).

So, should a preacher’s kid have gone trick-or-treating, let alone dressed up as a little Lucifer? Maybe not. But I would like to think that if the notoriously proud “Prince of Darkness” saw this geeky kid impersonating him in too-tight pajamas while begging for candy bars, he was infuriated rather than encouraged. For all the harm he can still do—for all the evil that does still haunt our world and our lives—what else, on this side of Easter, can he and his frightful forces ultimately be but a laughingstock?

“Thanks be to God, who gives us the victory through our Lord Jesus Christ” (1 Cor. 15.57)–in the life to come and in this life, every day–even at Halloween!

4 comments on “Toward a Theology for Trick-or-Treating: One Christian’s Perspective (Part 2 of 2)”