Halloween is over, but, on the Christian calendar, today is special, too. Since the ninth century, western Christians have observed November 1 as All Saints’ Day (or “All Hallows’ Day,” making October 31 “All Hallows’ Eve,” or “Halloween”).

Christians who observe All Saints’ Day celebrate the whole Church Triumphant: not only those given the official title “Saint” but also every believing Christian, each member of God’s holy people who has fought the good fight, finished the race, and kept the faith, for whom “is reserved… the crown of righteousness, which the Lord, the righteous judge, will give… to all who have longed for his appearing” (2 Tim. 4.7-8).

We give thanks for believers who’ve gone before us, especially those we’ve known and loved, whose lives of faith helped shape our own. We also rejoice that we remain united with them. God has, in the Book of Common Prayer’s beautiful language, “knit together [the] elect in one communion and fellowship in the mystical body” of Jesus Christ. We celebrate the truth that not even death breaks our bond with other members of Christ’s body. We are “surrounded by so great a cloud of witnesses,” fellow believers who cheer us on as we run the same race of faith they ran (Heb. 12.1).

The communion of the saints is a connection that transcends the boundaries of space and time. How could it not remind this sci-fi Christian, then, of some transcendent and enduring “communions” from the genre?

Here’s my countdown of the top five connections between the living and the dead in science fiction and fantasy that help me think about the communion of the saints: 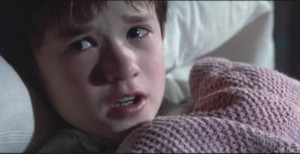 “I see dead people.” Haley Joel Osment’s confession to Bruce Willis in M. Night Shyamalan’s breakout thriller is not only one of its decades most iconic movie moments, but also points in a kind of backward way to the communion of the saints. We Christians “see dead people,” too: not literally as ghosts, but spiritually as brothers and sisters in Christ who are alive to God—for God is “God not of the dead, but of the living” (Luke 20.38)—and who offer inspiration and guidance as we, like them, follow Jesus, “the pioneer and perfecter of our faith” (Heb. 12.1-2). We see them as “those whose lives shine with the interior light that comes from refusing to waste themselves on nonessentials… [as] living maps to another way of being alive” (Joan Chittister, The Liturgical Year, Thomas Nelson, 2009, p. 193).

Gaiman’s Hugo Award-winning tale of a living boy raised by a cemetery full of dead people is really an entertaining and moving affirmation of life. Nobody Owens (“Bod,” for short; when he arrived as an infant, the graveyard’s residents decided he looked “like nobody but himself”) learns important lessons from the dead of many eras and circumstances, but must eventually, as all children do, leave home and live:

There was a smile dancing on his lips, although it was a wary smile, for the world is a bigger place than a little graveyard on a hill; and there would be dangers in it and mysteries, new friends to make, old friends to rediscover, mistakes to be made and many paths to be walked before he would, finally, return… (p. 286)

Like the Christian’s cloud of witnesses, the community of the dead that raises Bod provides crucial wisdom and encouragement as he learns to travel through the world they’ve already walked. The saints, however, are not “witnesses” because they’re watching us. Their lives (and, often, deaths) demonstrate how faithfully they watched Jesus. The lessons they teach are not about finding and fulfilling ourselves—except to the degree that we do so in living, as they did, for Christ.

Through the technology of Kryptonian memory crystals, Kal-El’s birth parents continue to instruct him during his career on Earth as Superman. The first two Superman movies depict a real and strong connection between our hero and his parents, despite the reality of their deaths many centuries before, many galaxies away.

The Richard Donner cut of Superman II, in particular, stresses how much this lasting link matters. Jor-El uses it to sacrifice himself for his son, restoring to Kal-El the powers he so rashly abandoned, so that, as Superman, he can save his adopted planet from having to forevermore kneel before Zod.

Superman’s communion with his parents in the Fortress of Solitude suggests something of the connection we share with the saints, unbroken even by death. Ultimately, however, its hope is too small. In Christ, God has radically redefined and expanded our family. As Jesus himself said, “Whoever does the will of God is my brother and sister and mother” (Mark 3.35). Our hope comes not from a never-ending communion with our parents, however loving and wise, like Jor-El and Lara, they might be. Our hope comes from our adoption into the household of God.

Whether you prefer the smiling and glowing Sebastian Shaw as the redeemed Anakin Skywalker (1983) or the sorta-smiling and glowing Hayden Christensen (2004) (no, I’m not biased; why do you ask?), Luke’s vision of the last three of the old Jedi Knights finally at peace and at “one with the Force” concludes the Star Wars saga with an appealing image of the harmony that characterizes good’s ultimate triumph over evil.

The image reminds me of a stanza from a hymn frequently sung on All Saints’ Day:

We feebly struggle, they in glory shine;

yet all are one in thee, for all are thine.

God has promised we will not be lost after death. Our redemption will be fully realized. We will be glorified (e.g., 1 Cor. 15.42-49; 1 John 3.2). By God’s grace, we will, to again quote the Book of Common Prayer, “come to those ineffable joys that [God] has prepared for those who truly love” him, the joys the saints who have preceded us already know.

(I wonder if, in the Star Wars universe, the saints in glory still get to sing “Yub Nub?”) 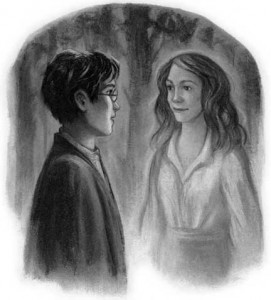 In Harry Potter and the Deathly Hallows, Harry makes his way into the forest to surrender to Voldemort, willing to die in order to save his friends (and, in fact, the world). As he goes to what he fully expects will be his death, Harry sees his loved ones who have already died: “Less substantial than living bodies, but much more than ghosts, they moved toward him, and on each face, there was the same loving smile” (pp. 699). They give Harry encouragement and confidence to do what he must, as difficult as it is. Earlier in the series (The Prisoner of Azkaban), Professor Dumbledore had asked Harry, rhetorically, “You think the dead we loved every truly leave us? You think we don’t recall them more clearly than ever in times of trouble?” (p. 427). In The Deathly Hallows, Sirius Black gives Harry the answer to those questions: “We are part of you… Invisible to anyone else” (p. 700).

This interaction Harry has with the dead who’ve loved him does, I think, capture much of what is at the heart of All Saints’ Day. Laurence Hull Stookey writes:

The All Saints observance is a time when all can reflect on and give thanks for deceased persons who have been influential in their spiritual formation and growth. As a result, all are reminded of the influence their lives can have upon others. This in turn may strengthen our resolve to lead lives worthy of imitation, to open ourselves more fully to the sanctifying power of God (Calendar: Christ’s Time for the Church, Abingdon Press, 1996, p. 148).

As another hymn appropriate for today sings, “They were all of them saints of God, and I mean, God helping, to be one, too!” (“I Sing a Song of the Saints of God,” Lesbia Scott, 1929).

What other parallels to and parables of the communion of the saints do you see in our favorite genres?

May all the saints, known and unknown, and especially those dearest to you, inspire you, today and every day, to persevere in following Jesus. No matter how difficult the journey may sometimes be, the destination we will reach with all the saints—“a better country… a heavenly one,” a city prepared for us by God (Heb. 11.16)—makes it the only pilgrimage worth taking.