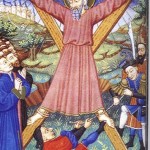 Today is Saint Andrew’s Day, the national holiday of Scotland. Andrew was the first disciple to bring another person to Jesus: he told his brother, Simon Peter, “We have found the Messiah” (John 1.41). According to tradition, he preached and performed miracles in Scythia following Jesus’ Resurrection, and eventually died a martyr’s death in Achaia, bound with cords to a diagonal cross. Pious legend recounts how he lived for two days on his cross, “not ceasing to preach the faith of Christ” (An Advent Sourcebook, Liturgy Training Publications, 1988; p. 18).

Further legends state that an angel instructed a monk to take Andrew’s relics—“a tooth, an arm bone, a kneecap and some fingers”—to Scotland. “What probably happened,” explains the website of St Mary’s Cathedral, Edinburgh, “was that the relics were brought from Rome by Saint Augustine as part of his great mission to bring the Word to the Anglo-Saxons… The relics were held at Kirrymont, which was later renamed St Andrews. From this time, the remains of the first-called Apostle became a major focus of European pilgrimage.”

I’m not a Scot myself, but I am a Presbyterian Christian, and Presbyterianism owes a great deal to Scotland (even if the Reformation under John Knox led to the destruction of Andrew’s bones—sorry about that). More to the point for our purposes, I am a sci-fi Christian! Saint Andrew’s Day seems the perfect time, then, to celebrate great Scottish characters who populate science fiction and fantasy.

I almost gave Pixar’s first female heroine a place on my list proper, simply because (a) she’s a redhead, like my own little girl; and (b) she looks like she will kick some serious arse. But since Merida can’t prove herself until her film hits theaters, I’ll just say that Brave looks beautiful, both visually and thematically. Based on this trailer, I anticipate an entertaining and exciting story that reminds us, as does the story of another young and unlikely hero who faced down gigantic opposition, that “the Lord does not see as mortals see; they look on the outward appearance, but the Lord looks on the heart” (1 Sam. 16.7).

“There can be only one…”

…but this deathless defender has to settle for fifth position because, really, what a bummer it must be to be the final surviving immortal! The recent book Geek Wisdom (Quirk Books, 2011) argues that the characters in the Highlander films and television series “satisfied a visceral urge in all of us, an unfulfilled yearning for the romanticized rugged individualism of earlier days” (p. 167). But Christians don’t (or shouldn’t) yearn for individual immortality—our hope is far greater than that! We look forward to being, not the last man or woman standing, but one of “the great multitude that no one [can] count, from every nation, from all tribes and peoples and languages, standing before the throne and before the Lamb…” (Rev. 7.9). The “only one” for us is “the living one,” who was dead but is now alive, forever and ever (Rev. 1.18).

Still: gotta hand it to Highlander for cool brogues and broadswords.

Donald Duck’s penny-pinching uncle first appeared in 1947, and is still a beloved Disney icon, despite his miserly ways. Although his highwater mark may have been during the run of the animated DuckTales series, I know him best from Mickey’s Christmas Carol (1983):

Fear not! As does his namesake in Dickens’ original, this Scrooge sees the error of his ways, and comes to know “how to keep Christmas well, if any man [or duck] alive possesse[s] the knowledge.  May that be truly said of us, and all of us!” (A Christmas Carol, Stave Five)

A Nobel Prize-winning geneticist and an old flame of Professor X, Dr. MacTaggert was Xavier’s silent partner in founding both his school and his first team of mutant superheroes, the X-Men.

You “Marvel Zombies” out there, correct me if I’m wrong… but does MacTaggert have any mutant ability herself except for the astonishing capacity to switch nationalities in X-Men movie continuity? In X-Men: The Last Stand (2006), she appeared only briefly. It’s hard to judge from only a few lines, but she sounded, if not Scottish, at least appropriately British:

Yet in this summer’s prequel, X-Men: First Class, she has become not only American but also a CIA operative! (According to actress Rose Byrne, director Matthew Vaughn “was adamant she be American—despite James McAvoy’s slight disappointment as he is Scottish.”)

No doubt long-time Doctor Who fans will want to run me through with a claymore for not including the Doctor’s first Scottish companion, Jamie McCrimmon, on this list. I can only plead my partiality as a curious viewer who was immediately and irrevocably transformed into a fan by “The Eleventh Hour.” I was captivated straightaway, as was our favorite Time Lord, by “the girl who waited.”

“You’re Amelia Pond!” The Doctor told her, when she was a little girl, that her name was “like a name in a fairy tale.” Young Amelia’s visit from the Doctor gave her a story to which she clung throughout a difficult childhood. She never stopped “dreaming of the magic Doctor she [knew would] return to save her.” Despite the Doctor’s failure to return, Amelia told and told and told the story—not just to herself, but to her family and friends.

Until she grew up. Berated by those psychiatrists into thinking the Doctor wasn’t real, Amelia stopped telling his story; and because she no longer told it, she no longer lived within it. And so she changed her name—a step never taken lightly in literature. So when The Doctor confronts her about her name change, she explicitly identifies its “fairy tale” quality as the reason she rejected it.

AMY: You told me you had a time machine!
DOCTOR: And you believed me!
AMY: Then I grew up!
DOCTOR: Yeah, well, you never want to do that.

Why is “growing up” in this way—abandoning the story—something “you never want to do”? Because, as Amy shows us in “The Big Bang,” storytelling to the extent that one lives within the story told can be a salvific act.

I found it so appropriate that “The Eleventh Hour” aired during Eastertide, when Christians remember that our religion rests on a story, a story that can seem (at times even to us, let alone to others) best left to children, a story about our “raggedy messiah” that is, no way around it, fantastic and outlandish. The Doctor’s not Jesus, of course, but what echoes you can hear in his words to Amelia Pond! “Do as I say… don’t wander off.” “Trust me.” “Believe in me.” Jesus said, “Do not doubt, but believe…” Maybe, at least, for 20 minutes? Maybe more, maybe less, at least for today? Any amount of time to which we can surrender to his story, The Story, in which we can assume our proper place as characters in it, leaves room for his Spirit to help us live into the Story more and more, to become Christ’s companions (the word literally means sharers of bread—or, perhaps, fish sticks and custard: after all, the risen Jesus did make a fish breakfast on the beach for his followers!)

Who else could the number one sci-fi Scot be but The Miracle Worker?

In a preface he provided for a short story in the first fan-written, professionally published anthology of Star Trek fiction, James Doohan confided his worries in the series’ earliest days that “there would be little use made of the Chief Engineer, because, after all, he was down in the ‘engine room.’ However, the writers kept slipping Scotty in there, and naturally, he was able to fix anything” (Star Trek: The New Voyages, Bantam Books, 1976; p. 37). Not only could Scotty fix anything, but Doohan could and did create, out of sometimes very meager material, a cherished character who inspired many viewers to pursue careers in real-world science and technology.

How could I possibly choose a favorite Scotty moment? Would it be the time he drunk an alien hijacker under the table with a bottle of something he could only identify as “green”? Or his sheepish admission to Captain Kirk that he threw the first punch in the bar brawl on Space Station K-7 because the Klingons insulted, not the Enterprise’s captain, but the Enterprise herself? What about his defiant “Up your shaft!” to the Excelsior’s turbolift? Or his heartbreaking return, via the wonders of the holodeck, to the bridge of the original Enterprise, “NCC-1701, no bloody A, B, C, or D”?

Maybe it’s not my favorite Scotty moment, but this one seems a fitting place to end:

Scotty’s not in the foreground—but what he’s doing in the background moves me so much. I’ve read that Doohan himself suggested the musical touch, much to composer James Horner’s chagrin. Apparently, when Doohan served in the Canadian Royal Air Force during World War II, “Amazing Grace” featured prominently in the funeral services of fallen servicemen as a melodious tribute.

However the hymn found its way into Star Trek II, I am glad it did. As much of a Trekkie as I am, I’ve always bristled at that universe’s unbridled confidence in human potential. I’ve tended to agree with novelist and Presbyterian minister Frederick Buechner, who places his faith in the Holy Spirit because “the human spirit just does not impress me that much, I am afraid” (“The End is Life,” The Magnificent Defeat, Harper & Row, 1985; p. 79). 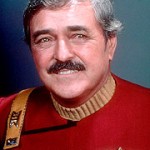 But as he squeezes those bagpipes, those most Scottish of instruments, Scotty provides a musical benediction over these somber proceedings, a promise of blessing and peace and, indeed, “amazing grace.” Whether Doohan or his character knew it; whether the rest of the cast or their characters knew it; whether Horner—whose orchestral segue, composed under protest, from the exterior shot of the newly formed Genesis Planet to the interior scene of Kirk grieving in his quarters, is a lush and lovely arrangement of the classic tune—knew it: those wailing pipes offer all of them, and all of us, a musical metaphor for the benevolence of our Father in heaven, who “makes his sun rise on the evil and on the good, and sends rain on the righteous and the unrighteous” (Matt. 5.45).

The sweeping scope of God’s grace can never be underestimated—and Scotty’s bagpipes give me hope that it sweeps even into Gene Roddenberry’s secular vision of the human adventure.

God’s grace is amazing. This we know because, as Andrew the apostle told his brother two thousand years ago, “We have found the Messiah.”

Almighty God, who gave such grace to your apostle Andrew that he readily obeyed the call of your Son Jesus Christ, and brought his brother with him: Give us, who are called by your holy Word, grace to follow him without delay, and to bring those near to us into his gracious presence; who lives and reigns with you and the Holy Spirit, one God, now and for ever.