So have you heard about “Alien Nativity” yet? Portland, Oregon artist Matt Henderson installed an illuminated, out-of-this-world-themed manger scene in a former church building this December. Not-so-little green wise men stand guard at the crèche, bearing gifts of “molecular parcels,” while a shamanic Santa Claus his creepy watch is keeping. See for yourself this thing which has come to pass, although you won’t be able to benefit from the 3-D glasses worn by those who visited it live.

Reactions to the display ran the gamut from amusement to offense (“this is blasphemy” and threats that those who disagreed were headed for hell) to suggestions for future iterations (“Cool if it were zombies…”) to a tangent about what the weather in Bethlehem was like that first Christmas. 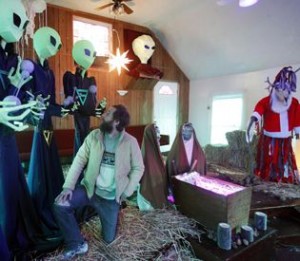 Personally, I’m not offended by “Alien Nativity.” There’s nothing sacred about the iconography of Jesus’ birth. Luke the evangelist actually gives us very few picturesque details of the scene (he doesn’t mention any animals, for example–or, for that mater, even a stable), and the Magi didn’t even make it to the manger (see Matthew 2.11–the liturgically fussy among us, including me, might have titled this piece “Alien Epiphany!”) Had Henderson set up a “Last Supper from Beyond the Stars” or “Cosmic Crucifixion,” then my sensibilities might have been a little shaken–but he didn’t, and they’re not.

I do, however, disagree with Henderson’s take on the true meaning of Christmas. Explaining why the manger in this manger scene cradles, not a child, but a mirror, Henderson says, “You wind up seeing a reflection of yourself, and that’s the symbolic message… Recognizing divinity and potential in yourself. And at the same time perhaps recognizing the terrestrial nature of Christ.”

I’ve no argument with “recognizing the terrestrial nature of Christ.” Belief in Jesus’ full humanity, as well as his full divnity, is classic Christian theology. But seeing potential divinity in ourselves? Human beings are wonderful, fashioned in God’s image (Gen. 1.27) and  “crowned with glory and honor” (Ps. 8.5); but we harbor no inherent divine potential. Even had we never fallen into sin, we would remain distinct from God. We are creatures, not the Creator; and, as any number of “mad scientist” sci-fi stories warn, losing sight of that distinction leads to all kinds of trouble.

The miracle of Christmas is not that humans become divine, but that the Divine became a human–more human, in fact, than any of us! Sinfulness is not an attribute proper to humanity. God did not create us sinners. We have no firsthand experience, therefore, of what “true humanity” looks like, because we live with the aberration of sin, personal and corporate, every day. In Jesus Christ, however, we encounter one who shares our human flesh and blood and who “in every respect has been tested as we are, yet without sin” (Heb. 2.14; 4.15). When we abide in Jesus, we share his life, a fuller and “more real” life than we are able to live when left to our own. As one of my denomination’s statements of faith puts it, “In Jesus of Nazareth, true humanity was realized once for all” (The Confession of 1967, 9.08).

In at least one way, I think “Alien Nativity” is on the right track. Christmas is an invasion–not of extraterrestrials, but of God’s grace. At Bethlehem, we kneel, not before a reflection of ourselves, but before the One who comes to us in love and power to make us more like himself: truly human, living always in close communion with God, as we were created to live. Only then can we say that Jesus’ manger holds a mirror, as we “are being transformed into the same image from one degree of glory to another,” all of which “comes from the Lord, the Spirit” (2 Cor. 3.18).

Now, about Henderson’s plans to set up a “McNativity” next year…!

Photograph of “Alien Nativity” by the Associated Press, found at http://www.bostonherald.com/news/offbeat/view/20111223oregon_artist_twists_christmas_tradition_with_alien_nativity/srvc=home&position=recent.

2 comments on “Close Encounters of the Truly Human Kind”