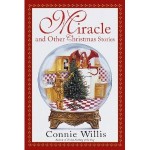 By her own admission, multiple Hugo- and Nebula-winning author Connie Willis loves Christmas, especially Christmas stories. She’s been writing them for Asimov’s Science Fiction and other markets since the 1990s (and she recently posted a bibliography of them all here). She doesn’t like the “improbably sentimental and saccahrine stories,” however, but the good ones, “starting with the orginal.” It has, she writes in her introduction to Miracle and Other Short Stories, “all the elements of great storytelling: drama, danger, special effects, dreams and warnings, betrayals, narrow escapes, and–combined with the Easter story–the happiest ending of all.”

Although it’s set a few days before Christmas, Willis’ delightful and deeply moving short story “Inn” also makes perfect reading for the feast of the Holy Family, which is being observed today by Roman Catholics as well as by some Anglicans, Episcopalians, and Lutherans. One of the more recent additions to the liturgical calendar (1893), the day celebrates Jesus, Mary and Joseph as a family characterized by “faithful love and devoted attachment.” It encourages Christians to display these virtues not only within the home but also outside it. As Joan Chittister writes in her lovely book, The Liturgical Year (Thomas Nelson, 2009), the day’s focus on the young Jesus’ domestic situation (see Luke 2.52) causes us

to wonder what wisdom, maturity, and virtue the children of our time are able to see in us that will transfer itself to them. We must ask ourselves if we are learning from one another, caring for one another, becoming more spiritual together as we go. And if not, why not? And what do we intend to do about it, as Jesus did, for the sake of the rest of the world?

These questions are at the heart of Willis’ story.

In the middle of one congregation’s chaotic dress rehearsal of the annual Christmas pageant (has anyone ever attended an orderly pageant rehearsal?), a homeless couple arrives at the door, as snow and sleet begin to fall. Sharon—our protagonist, a kind-hearted but harried choir member preoccupied with finishing her family’s own preparations for the holiday—lets the couple into the church building to wait for a van from a shelter. She does so despite cautions given earlier that night by Reverend Farrison, the assistant minister: “We can’t let [homeless people] stay in here unsupervised. First Methodist’s had their collection stolen twice in the last month, and we’ve got all these donations for the ‘Least of These’ project in there… Letting them in isn’t doing them a kindness.” As Sharon shuffles the couple from one room in the church to another, struggling to keep their presence a secret from Reverend Farrison and the rest of the pageant participants, she realizes that this lost and scared young man and his pregnant wife, who wear sandals and speak a language Sharon has never heard, are not only out of place, but out of time:

She stared at them, breathing hard, and it was them, their never having seen stairs before was proof of that, if she needed any proof, but she didn’t, she had known it the instant she saw them, there was no question.

She wondered if this was some sort of vision, the kind people were always getting where they saw Jesus’ face on a refrigerator, or the Virgin Mary dressed in blue and white, surrounded by roses. But their rough brown cloaks were dripping melted snow on the nursery carpet, their feet in the useless sandals were bright red with cold, and they looked too frightened.

And they didn’t look at all like they did in religious pictures. They were too short, his hair was greasy and his face was tough-looking, like a young punk’s, and her veil looked like a grubby dishtowel and it didn’t hang loose, it was tied around her neck and knotted in the back, and they were too young, almost as young as the children upstairs dressed like them…

“How did you get here?” she said wonderingly. “You’re supposed to be on your way to Bethlehem.”

The rest of the story relates Sharon’s efforts to help Mary and Joseph get back in time and back on the road to “Bott Lom” (as Joseph, speaking Aramaic, calls their destination). “Inn” is thus undeniably science fiction, but Willis treats the temporal mechanics of her tale quite lightly (far more lightly than in her “Oxford Time Travel” works), and rightly so. What makes “Inn” so compelling is not really its sci-fi concept, but its depiction of one person’s determined effort to do the right thing.

“Inn” showcases Willis’ characteristic wit and expert eye for detail. She perfectly captures the eleventh-hour frenzy of prepping a Christmas pageant in many a congregation, right down to the rearranging of poinsettias and the coaching of reluctant children: “Balthazar, lay the gold in front of the manger, don’t drop it. Mary, you’re the Mother of God. Try not to look so scared.”

That last admonition is, of course, testament to Willis’ theological insight, as well! According to one website, Willis has belonged to both Lutheran and Congregational churches, and she apparently told (the late, lamented) Science Fiction Weekly, “It is my belief that everything you need to know about the world can be learned in a church choir.”

Certainly, Willis describes the unnamed, suburban, mainline Protestant congregation in which “Inn” is set with an insider’s appreciation of both the potential and the pitfalls of church life. Reading this story as a former pastor, I always cringe when the Reverend Farrison, whose heart was no doubt initially in the right place, proves too busy planning and collecting donations for her “Least of These” homeless relief program to be bothered when the least of these actually show up. She ultimately leaves the front porch light turned off to “discourage any more homeless from coming”:

“Reverend Wall let a homeless man wait inside last week, and he relieved himself on the carpet in the adult Sunday school room. We had to have it cleaned.” She looked reprovingly at Sharon. “With these people, you can’t let your compassion get the better of you.”

No, Sharon thought. Jesus did, and look what happened to him.

I also wince (while laughing, I admit) to hear the Reverend Wall, the congregation’s aging senior pastor, drone through the same Christmas Eve sermon he has preached for decades:

Reverend Wall nodded awake at his name. “Ah,” he said, and hobbled toward the pulpit, clutching a sheaf of yellowed typewritten papers.

“Oh, no,” Sharon said [to Virginia, sitting next to her in the choir]. “Not a Christmas pageant and a sermon. We’ll be here forever.”

“Not a sermon,” Virginia said. “The sermon. All twenty-four minutes of it. I’ve got it memorized. He’s given it every year since he came.

“Longer than that,” Dee [another chorister] said. “I swear last year I heard him say something in it about World War I.”

We’ve probably all heard preachers like the Reverend Wall. Those of us who preach pray we haven’t been preachers like him! Yet even his war horse of a homily becomes an opportunity for the truth to be heard: “Though we know nothing of their journey… we know much of the world they lived in. It was… a world too busy with its own business to even notice an insignificant couple from far away.”

No one in the story’s cast of characters is a villain. They are simply all so busy: caught up, as we all are in danger of being caught up every December, in the busy-ness of a cultural, consumer-driven Christmas. Even Sharon. She is, like Martha of Bethany, “worried and distracted by many things” (Luke 10.41): “I don’t have anything done,” Sharon laments near the beginning, as the rehearsal has been delayed. “Christmas cards, shopping, wrapping, baking, nothing, and Bill’s parents are coming… Come on, let’s get this show on the road.” Even when she takes in the Holy Couple, she does so against her better judgment, and afraid of what will happen. But she does it. It’s not that Sharon is a better person than her pastors or her fellow congregants. She simply sees a need and does what she can, what she feels she must—and that is enough of an opening for grace to slip through, grace both given and received.

“Inn” has become my favorite seasonal reading because it reminds me, each time I read it, that for all Christians’ well-intentioned talk about “keeping Christ in Christmas” (as though Christ’s presence anywhere were up to us), if we are to encounter Christ in Christmas, it likely won’t be in ways we expect.

Earlier this month, a man told me about how he was walking down the street on his way to work, running late and really hungry because he’d skipped breakfast. He decided to stop in at a McDonald’s. To reach the restaurant, he walked past a young couple huddled together on the sidewalk. They had an empty cup in front of them, clearly for people to throw pocket change into; but they were sat so still, and didn’t bother to look up or put out a hand as he walked by. And he did walk by. But as he was waiting for his Egg McMuffin, he couldn’t stop thinking about that couple. So he added a gift card to his order, and doubled back just long enough to ask the couple their names and give them the card. As he told me this story he said, “I don’t remember what their names were… but I know his was Joseph, and hers was Mary.”

Connie Willis would understand what he meant. By God’s grace, so may we all.

All Scripture quotations are from the New Revised Standard Version. “Inn” was first published in Asimov’s, December 1993, and has been reprinted in Willis’ anthologies Miracle and Other Christmas Stories (Bantam, 2000) and The Winds of Marble Arch (Subterranean Press, 2007), as well as the anthology Isaac Asimov’s Christmas (ed. Gardner Dozois, Ace, 1997).