Peter flung out his arms. There were no children there, and it was night time; but he addressed all who might be dreaming of the Neverland, and who were therefore nearer to him than you think… “Do you believe?” he cried. “If you believe,” he shouted to them, “clap your hands; don’t let Tink die.” Many clapped. Some didn’t. A few beasts hissed.

I confess: I’ve never been a Peter Pan fan. The story of the boy who stubbornly refuses to grow up leaves me cold, whether on the musical stage or in the Disney animation. The only version of Peter’s mythos I’ve ever enjoyed is Steven Spielberg’s 1991 revisionist take, Hook, which most audiences, it seems, didn’t care for; all these years later, it still has only a 29% fresh rating at Rotten Tomatoes. Like another underappreciated fantasy classic, Return to Oz (1985), Hook beautifully blends the whimsy of imagination with an appreciation of life’s sometimes painful realities, producing an experience that both pays homage to and surpasses the “consolation” (to borrow J.R.R. Tolkien’s term) of its source material for having done so.

But I will not confess to being one of those “beasts” who hiss whenever Tinkerbell, having imbibed poison intended for Peter, teeters on the edge of death. Because I never do. I always clap. I feel ridiculous doing it; and I cry with a mixture of embarassment and real hope; but I clap. It’s the one moment in all of Peter Pan that rings true to me.  Greater love hath no man… nor magical fairy… 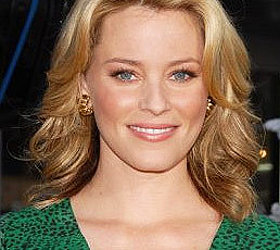 So, Pan-detractor though I generally am, I’m intrigued by the news that Disney is prepping a live-action film focused on the self-sacrificing pixie herself. With a screenplay being revised by Buffy and Angel alumna Marti Noxon and starring Elizabeth Banks–whom genre fans last glimpsed in Spider-Man 3 and will soon see more prominently in The Hunger Games—Tink will be a comedic look at what happens when Neverland’s favorite fairy winds up in the real world.

Think Elf, think Enchanted–but think also that, if Tink stays at all true to its source, it, too, might include that magic moment when each of us in the audience have to decide–as in the life of faith–whether we believe in things unseen, whether we will, despite ridiculous and embarassing tears, clap our affirmation that light shines even in the valley of the shadow of death.

Apparently Tink isn’t yet a “done deal,” so the project itself may need our applause if we ever want to see it. What do you think? Does Tink sound like a film worthy of your ovation?

3 comments on “Do You Believe in (Live-Action) Fairies? (Movie News)”