Sci-fi and fantasy fans, rest easy. No matter who wins this year’s presidential election, the nation will be in geeky hands. 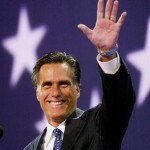 This week, News Track India ran a story reminding readers that presumptive Republican presidential nominee Mitt Romney “has called his affinity for sci-fi a ‘guilty pleasure’ and openly admitted to diving into titles that run the gamut from Battlefield Earth to Star Wars.” Also, back in March, Romney told CNN’s Wolf Blitzer that he not only read The Hunger Games but also took his granddaughters to see the film. (During the last campaign, Romney revealed the girls also got him intrigued in “silly stuff” like Twilight). 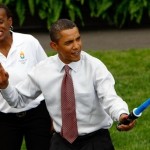 Of course, President Obama’s geek cred has been a matter of public record for some time now. He used to collect Spider-Man and Conan comic books. He knows what dilithium crystals are and can make jokes about them (MSNBC reports, “As he laughed at his own joke, Michelle Obama rolled her eyes, as geek wives often do.” So true – this I know from experience!) And he’s been spotted both flashing the Vulcan salute in the Oval Office (with Nichelle “Uhura” Nichols herself, no less) and brandishing a lightsaber on the White House lawn.

Do you think candidates’ or elected officials’ book, movie, and TV choices matter much? Some pundits with political axes to grind seem to think so. Depending upon who you ask, for example, a candidate’s leanings toward science fiction can indicate such positive personal attributes as being forward-thinking and open to innovation, or can betray a lack of touch with reality. (Remember how many in the media made merry of former Speaker of the House Newt Gingrich’s plans for a moon base?)

Personally, I’d rather pay more attention to candidates’ past record and stated public policy objectives than the movies in their Netflix queue or the books on their bedside table. Even so, it may be a measure of how far geek culture has come that both major presidential candidates feel free to divulge their “nerdier” interests without fear of reprisal at the polls. Hopefully, the electorate will make its decision based on far weightier matters.

Maybe when the voting’s done, we can all relax and enjoy a good space opera together. (And, hey, if either Romney or Obama is reading this: how about making genre book and movie ticket purchases tax deductible? Just a thought…)