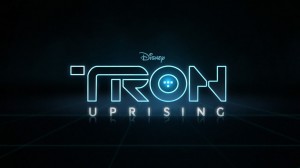 On June 7th the world of Tron arrives on the small screen with Tron: Uprising, Disney XD’s animated offering to the Tron universe.

Well, actually it has already been released on Disney XD, the Disney Channel, iTunes, YouTube and anywhere else Disney has been able to post the first episode “Beck’s Beginning.”
http://youtu.be/hjbwVzJR8w4

Here are my first thoughts.

I was also shocked by the voice cast.  I am glad that they brought in Bruce Boxleitner to voice Tron.  Its a good think to have Tron in a project with the Tron name, unlike that last movie!  But the rest of the cast is Rapunzel and Bilbo Baggins with Mandy Moore and Elijah Wood.  The cast, in my opinion, is one of known actors not professional voice actors like you would find on Star Wars: The Clone Wars.  A good example is one might expect to find Corey Burton who provides Count Dooku and other voices in Star Wars: The Clone Wars to have at least a supporting role as he has strong relationship to Disney, voicing Captain Hook for Jake and the Neverland Pirates.  This choice for now has made me a little nervous.

I will give them that they are fearless with them not hiding the more violent action off screen.

Edward Kitness and Adam Horowitz from Once Upon a Time serve as consulting producers.  I want to say this is a positive as their story work as impressed me on Once Upon a Time, but they also lead Tron: Legacy, which story wise I was not overly impressed with.  I guess their involvement makes me hopeful.

So what is your verdict on Tron: Uprising?  At the moment I think the Tron concept is better than the payoff we have had to date.  I personally rank the Tron offerings in this order: ElecTRONica, Tron: Uprising, Tron: Legacy and the original Tron at the bottom of the pile.

At the moment, I won’t be making room on my DVR for Tron Uprising, choosing to give that honor to Ultimate Spider Man instead!  Will you be entering the grid?