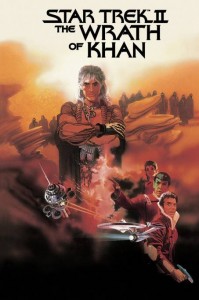 Thirty years after its debut, The Wrath of Khan remains the most rewarding trek to the final frontier. Here are thirty reasons why.

Plenty of people, fans and non-fans alike, love “the one with the whales.” And the light-hearted, lens-flare-filled sensibility of J.J. Abrams’ 2009 reboot (or was it?) of the series may define the franchise for the next decade or so. But Star Trek II: The Wrath of Khan, which will celebrate its 30th anniversary on June 4, is, and forever shall be, the definitive Star Trek film in my book. Join me each day from now until next Tuesday to find out why–and be sure to give me your two (or more) quatloos about the movie that proved, where Star Trek is concerned, “there are always possibilities.” 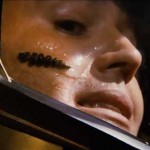 “These are—pets, of course. Not… quite… domesticated.” —Khan

Yes, they’re gross—but they’re also great! (Kind of like Frosted Flakes.) Ceti eels were the creepiest cosmic critters Star Trek had seen since those flying, flapping parasites in “Operation: Annihilate!” that looked more like fake vomit from a mail-order novelty catalogue. The Ceti eels (never actually named onscreen) set a new standard of “gross out” factor for the franchise. Consider their legacy. Five years later, the Next Generation episode “Conspiracy” showed Starfleet officers chowing down on intergalactic grubs and an Alien-esque monstrosity popping out of Commander Remmick’s chest; and, in the 2009 Star Trek, the beastie that slithers down poor Captain Pike’s throat is a clear homage to Khan’s “pets.” If you like your Star Trek with the occasional side order of slimy, scary stuff, you’ve got Ceti Alpha V’s only remaining indigenous life form to thank. Just don’t get too close as you do so.

Kirk: Why, Bones, you know this stuff is illegal.

McCoy: I only use it for medicinal purposes… Now, don’t be a prig.

McCoy: Yeah, well, it takes the stuff a while to ferment.

It’s easy to forget—especially after the spectacular way it derailed the diplomatic dinner aboard the Enterprise-A in Star Trek VI—that this illicit libation hasn’t been always been a mainstay of the 23rd century. Before Bones brought Kirk a bottle of the blue booze with which to celebrate the admiral’s birthday, the strongest stuff served in the Trek universe was Saurian brandy. Personally, I’d be one of those “prigs” Dr. McCoy dismisses—I don’t go for Terran alcohol, let alone extraterrestrial varieties—but I was, as a teenage Trek fan, not above sometimes spiking a glass of Sprite with blue food coloring, and following up a swig with my best impression of Shatner’s “wow, that’s strong” grimace.

“I am aware of your fondness for antiques.” — Spock 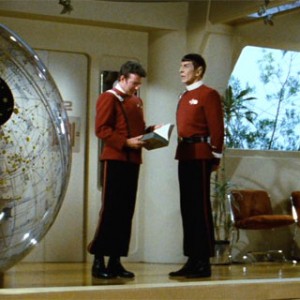 Spock may have been aware, but most fans weren’t. Maybe we should’ve been. Most people think of Kirk as an energetic, impulsive, carpe diem kind of guy, always looking toward the future, not the past. He certainly is all that. The earliest episodes of the original series, however, established a more contemplative, “bookish” aspect of Kirk’s character, as well. In the second pilot episode (Kirk’s first appearance), Gary Mitchell recalled that, during their days at Starfleet Academy, Kirk was “a stack of books with legs” who enjoyed reading “longhair stuff” like poetry and philosophy. And while Sam Cogley, in “Court Martial,” gave Kirk a printed, bound book mostly to make a point about technology’s dehumanizing tendencies, he also sent word that the book was “not a first edition”—perhaps implying he thought Kirk would know and care enough to ask. The “revelation,” then, that Kirk takes an interest in humanity’s material past shouldn’t come as a complete surprise.

Kirk’s antiquarian collection showcases old clocks, model ships, and weaponry (wonder if Sulu covets any “police specials” the admiral might own?). It represents a fate McCoy explicitly admonishes Kirk to avoid: “Get back your command. Get it back before you turn into part of this collection—before you really do grow old.” By the film’s end, however, we catch hints that the collection could also carry positive associations. Kirk’s declaration that he feels “young” comes as he quotes the last lines of Spock’s birthday gift to him: a leather-bound copy of Charles Dickens’ Tale of Two Cities.

“He tasks me! He tasks me, and I shall have him! I’ll chase him round the Moons of Nibia, and round the Antares Maelstrom, and round perdition’s flames before I give him up!” — Khan (after Herman Melville)

Kirk has his books—and so does Khan. In the original series’ best tradition, Jack B. Sowards penned a screenplay so enriched by a love of literature, even the bad guy is a bibliophile. True, “Space Seed” (the 1967 episode to which Star Trek II is a direct sequel) hinted at the genetically engineered tyrant’s fondness for books, but here, Khan not only cites but rewrites standard authors and texts to cast his quest for vengeance as an epic in itself. From that “old Klingon proverb” about revenge to his lengthy invocations of Captain Ahab (Star Trek: First Contact owes a similar debt to Moby-Dick, but Star Trek II did it first), Khan must be the most literate villain any Enterprise ever faced. (General Chang, in Star Trek VI, throws a lot of Shakespearean snippets around, but doesn’t even approach Khan’s passion.) Khan’s futuristic revision of Ahab’s vow to catch the white whale, quoted above, must be the single best paraphrase of classic literature in any science fiction film (although I give runner-up honors to Tars Tarkas’ inadvertent evocation of Matthew 5.30 in John Carter).

Kirk isn’t known for slavish devotion to Starfleet protocol, but he knows it when it counts. We learn that Starfleet Regulation 46-A states, “If transmissions are being monitored during battle, no uncoded messages are to be transmitted on an open channel.” (This actually seems like something common sense would dictate; one wonders why Starfleet Command felt it necessary to write it into the rule book.) The “by the book” code Kirk and Spock use to trick an eavesdropping Khan into thinking the Enterprise is critically damaged ranks with Kirk’s “corbomite maneuver” and his impromptu invention of fizzbin as one of the best ways to bamboozle a baddie in the entire series. (Equally priceless is Spock’s exchange with the surprised Saavik when his part in the ruse is revealed: “You lied!” “I exaggerated.”)

As the “khan-tdown” continues tomorrow: A crash course in Vulcan philosophy!