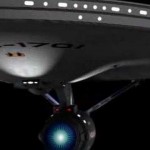 It’s the penultimate day of our countdown to the 30th birthday of Star Trek II. “Mister Scott, we’ll be going to warp speed!” And speaking of fast…

10. Meyer Pulls a Fast One on the Fans

Never underestimate a clever filmmaker. Even before the Internet, moviemakers had to contend with rumors, leaks, and spoilers. As I’ve heard the story, word got out to Trek fan communities that Star Trek II would mark Leonard Nimoy’s last outing as Spock. Outrage ensued. Undaunted, director Nicholas Meyer moved the celebrated Kobayashi Maru scenario—in which not only Spock but also almost all the major members of the Enterprise crew meet grisly ends, one after the other, like dominoes falling—to the beginning of the film. Viewers seeing the movie for the first time, therefore, watched Spock “die” less than five minutes in, only to stand up, brush himself off, and walk away unscathed. “Oh!” the audience thought. “So that’s what all the fuss was about? It was just a big misunderstanding!” Hence Admiral Kirk’s greeting of Spock immediately afterward: “Aren’t you dead?” Spock lifts his eyebrow, and the audience enjoys a good laugh at its own expense, settling in to watch the rest of the movie secure in the knowledge that Spock is safe.

Ever wondered why, in the aftermath of Khan’s first attack on the Enterprise, a tearful Scotty takes the wounded and bleeding young cadet Peter Preston to the bridge rather than straight to sickbay? Me too. Scenes in the film’s extended version don’t resolve that question, but they do reveal why Peter’s death grieves Scotty so: Peter is Scotty’s nephew. “My sister’s youngest,” the engineer proudly tells Kirk in one extended scene, “crazy to get to space.” “Every young man’s fancy,” Kirk muses, before ruefully adding, “I seem to remember it myself.” 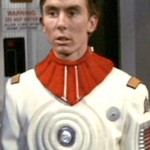 Played by Ike Eisenmann (whose many roles include Tony from 1975’s Escape to Witch Mountain as well as Sheriff Antony in 2009’s Return to Witch Mountain), Preston embodies youthful idealism. He also, unfortunately, represents the way death can unfairly bring youthful dreams to a sudden stop. Watching McCoy pull the sheet over Preston’s scarred face, I think of the Teacher’s sad but true observation: “The race is not to the swift or the battle to the strong”—at least, not always—“…but time and chance happen to them all” (Eccles. 9.11, NIV). Peter stays at his post even as the rest of the trainee crew panics; he performs his duty even when it is costly. Life’s not supposed to be that way! No wonder the apostle Paul calls death “the last enemy” (1 Cor 15.26). Peter Preston’s death is the first of three in the film that inexorably bring Kirk face to face with mortality.

“Maybe it’s something we can transplant, hm?” 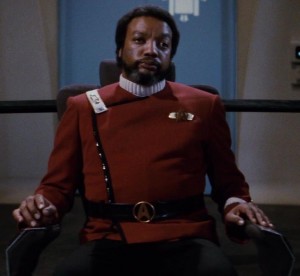 A distinguished veteran of stage and screen, Paul Winfield deftly creates, in just a few minutes’ screen time, a character audiences care about even though he is under Khan’s control virtually the whole film. For those few moments. however, I feel we get to know the real Terrell: a seasoned if somewhat weary commanding officer who nonetheless can still rise to the challenge of a good mystery. Unfortunately, this mystery’s solution will prove deadly to Terrell. Not that he goes gently! Although he can’t break free of the Ceti eels’ influence, he clings to his own moral bearings long enough to refrain from shooting Kirk, turning his phaser on himself instead. Terrell sacrifices himself for the greater good, just as Peter Preston earlier has, and just as Spock soon will. (Winfield played another self-sacrificial character when he returned to Trek as Dathon in the popular fifth-season Next Generation episode “Darmok.”)

“Could you use another hand, Admiral?”

When fans talk about Chekov in Star Trek II, they usually want to debate how Khan recognizes him, when “Space Seed” (Khan’s first appearance) was a first-season episode and actor Walter Koenig didn’t join the cast until the second season. There are l 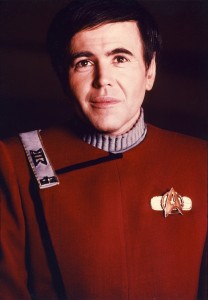 ots of theories out there; take your pick. (Walter Koenig speculates that they crossed paths on the way to the original Enterprise’s never-seen restrooms!)

What interests me is the fact that, in Star Trek II, Chekov becomes the first of the original series’ “supporting characters” to experience an elevation, however brief, to major player in the films. He has moved on from the Enterprise and is now first officer aboard another starship. While George Takei and Nichelle Nichols are woefully underused in this movie, Koenig receives a fair amount of screen time. He shows dry humor aboard the Reliant (“Does it have to be completely lifeless?” and “You know what she’ll say!”), strength of will as he struggles against Khan’s mind-controlling eels, and conduct in the finest Starfleet tradition as he returns to the Enterprise bridge in time to deliver the photon torpedo that all but finishes off the Reliant. And, of course, the scene in which he realizes the danger he and Terrell face on what they think is Ceti Alpha VI is one of the movie’s most iconic moments: “Botany Bay… Botany Bay… oh, no!”

David: You remember that overgrown Boy Scout you used to hang out with?

Carol: Listen, kiddo, Jim Kirk was many things, but he was never a Boy Scout.

What a shame the Doctors Marcus did not remain a part of the Star Trek universe. In her outstanding novelizations of Star Trek II, III, and IV, Vonda McIntyre develops both Carol and David as fully realized characters, with hopes, fears, regrets, and passions only hinted at on screen. Alas, David would return only in the third film, and this movie is Carol’s only canonical appearance.

Better known for her prolific television work, Bibi Besch brings brains, authority and grace to the role of Dr. Carol Marcus. We don’t know why her past relationship with Kirk turned sour, but it’s easy to imagine the admiral ultimately couldn’t handle a woman who is as strong-willed as he is! Fans sometimes speculate that she is “the little blonde lab technician” whom Gary Mitchell mentions way back in “Where No Man Has Gone Before”—the one Kirk says he almost married—but I doubt Carol needed anyone to “outline her whole campaign for her,” as Gary admitted to doing. Carol is her own woman—her own person—who has both a vision of what could be and the will to make it happen.

Some fans dislike the character of David intensely. I’ve heard him called “whiny,” “annoying,” “a brat”… you know, all the stuff usually reserved for Wesley Crusher. I think these negative reactions to David in Star Trek II are more about the way Star Trek III criminally mismanages the character. An outrageous and completely unnecessary “revelation” in that movie would have us believe that David secretly slipped dangerously unstable protomatter into the Genesis matrix as a shortcut.

In a pig’s eye! The David Marcus we meet in Star Trek II isn’t that kind of person. He’s a highly trained and idealistic scientist who has shared his mother’s dream of the Genesis Project for most of his young life. He is fiercely protective of it, and of her. He’s also scary smart (this guy has an earned doctorate in super space science at about age 20) and unafraid to speak the truth. He’s the only character who calls Kirk’s “solution” to the Kobayashi Maru exactly what it is: “He cheated!” (All the more reason he would never stoop to “cheating” in his own work.) And, as this scene shows, David is thoughtful, sensitive, and wise beyond his years:

David deserved far better at the hands of the Star Trek III creative team. He could have grown into a rich character—truly, the first member of Trek’s “next generation.”

Perhaps best remembered outside of Trek for his time on the TV sitcom Square Pegs, actor Meritt Butrick would appear on The Next Generation, in the episode “Symbiosis” (along with his fellow Star Trek II alum, Judson Scott, who chose to be uncredited for his fine turn as Khan’s right-hand man, Joachim). Sadly, Butrick’s career was cut short when he died of AIDS-related toxoplasmosis in 1989. He was only 29 years old. Bibi Besch died of cancer in 1996, at 54 years of age. Although neither of these fine performers are with us today, their work, individually and together, in Star Trek II as the family Jim Kirk never knew ensures their importance, not only in franchise history but also in many fans’ hearts.

Tomorrow: The Khan-tdown concludes with the big reveals! Which five characters, plot points, or memorable moments guarantee Star Trek II’s place as the best cinematic trek ever? Be sure to come back and find out!