“There’s no correct resolution, it’s a test of character.” – Kirk

Even knowing that it’s only a test, Star Trek II’s opening sequence never fails to hold my attention.

Since I’m no longer surprised by the action (although I still like it, as well as the cast’s performances—like that great look Takei puts on Sulu’s face when Saavik insists she knows what she’s doing), I guess I’m still enamored of the idea that a Starfleet officer candidate’s “final exam” is a test of character, not combat ability. How quintessentially Star Trek!

The Kobayashi Maru, of course, loomed large in J.J. Abrams’ Trek film. Even in the new, Nero-influenced timeline, Jim Kirk becomes the only Starfleet cadet to ever beat the “no-win scenario.”

I appreciated the new film’s continuity with Star Trek II on this point (even if I never imagined Kirk’s taking of the test to be as comical as it was portrayed!). Of course, the events of The Wrath of Khan themselves prove to be Kirk’s real “final exam.” We, as viewers, do indeed learn a lot about Kirk based on how he faces not only life but also death… and we are left to reflect on how we face “no-win scenarios” of our own.

Incidentally, you might enjoy this clever, fan-produced video highlighting the Kobayashi Maru through-line from 1982 to 2009:

Well, getting the superficial stuff out of the way: say what you will about her since then, but in 1982, making her big screen debut as Spock’s protégé, Kirstie Alley was very attractive. Fortunately for Star Trek II, though, she proved to be much more than a pretty face. Alley’s Saavik is the most engaging new character to appear in any Star Trek movie. No contest. She combines the endless fascination (ha!) of Vulcans with unexpected flashes of emotion and wit.

In the script and novelization, we learn that Saavik is half-Romulan, the cast-off product of a forced Vulcan-Romulan union (she doesn’t know which parent was which) on the failed colony world of Hellguard (anticipating Tasha Yar’s home world in The Next Generation). Alley’s performance is so strong, however, viewers don’t need this exposition. Saavik simply is who she is—logical, capable, purposeful, an alien charting her own path in the mostly human Starfleet, just as a young Spock did before her—and no further explanation is needed.

When Alley chose not to reprise the role in Star Trek III (I’ve heard she wanted more money than Paramount was willing to pay, but I don’t know for certain), newcomer Robin Curtis played the role, at director Leonard Nimoy’s behest, as a more straightforward Vulcan. Over the years, I’ve come to appreciate Curtis’ take on the role—but (shameless plug alert), when I wrote a story fea

turing Saavik for Star Trek: Strange New Worlds II, the Saavik I wrote was played in my mind by Kirstie Alley. (Still available as an e-book! Makes a great gift for dads and grads!)

Originally, plans called for a romance to develop between Saavik and David Marcus. This subplot (like Saavik’s pregnancy in Star Trek IV) was left on the cutting room floor and, like Sulu’s promotion, it has still never seen the light of day (officially, at least). I still wonder who prevented David and Saavik from becoming accepted as the first “next generation” of Star Trek. Whether Trek fans or (as I suspect) studio powers that be are to blame, the loss remains a shame. I am glad, however, that this film preserves several glimpses of one possible future for the franchise.

It’s the franchise’s past, of course, that largely drives Star Trek II, in the person of Khan—fortunately, not recast from his original appearance in 1967’s “Space Seed,” but portrayed once again (complete with, yes, his own pectoral muscles) by the late Ricardo Montalban. He was reluctant to return the role, after so many years as Mr. Roarke on “Fantasy Island,” and selling automobiles upholstered in “rich Corinthian leather.” He feared audiences would not believe him in the role. Of course, his fears were unfounded. He turned in a magnificent performance, preserving all of the charisma he’d shown in the role nearly two decades earlier, and adding to it a layer of truly frightening madness.

Rumors continue to swirl regarding whether Benedict Cumberbatch will be recreating the role of Khan in the sequel to the Abrams Trek film. Most recently, Simon Pegg has denied that Khan will surface in the new movie. I certainly hope he’s right. In Khan, Ricardo Montalban gave not only Trek but cinema in general a villain for the ages—a bad guy who’s name deserves to go on echoing through the cosmos, screamed at the top of William Shatner’s lungs.

As you may know, the only way writer-producer Harve Bennett could lure Leonard Nimoy into taking part in Star Trek II was the promise of “a great death scene.” It was, without doubt, a promise kept.

The aftermath, at Spock’s funeral, is equally as affecting:

“Greater love,” said Jesus, “hath no man than this, that a man lay down his life for his friends” (John 15:13, KJV). Spock’s “solution” to the Kobayashi Maru is so moving, and such a perfect place to end the character’s arc throughout the whole franchise—from a young man struggling to suppress all human emotion in the show’s earliest days (okay, except for that weird business with the singing plants in “The Cage”) to the seasoned life traveler who learned from V’Ger, in The Motion Picture, that “logic and knowledge are not enough”—that I have always thought (not without some twinges of guilt) that perhaps Star Trek would have been stronger had Spock stayed dead. We might have gotten more development for the new characters of David, Carol, and Saavik, for instance, had we not been preoccupied with getting Spock back. We might have seen some fundamental changes in Kirk as he learned to live with the loss of “the most human soul” he’d ever known. In the end, however, I can’t really say I’m sorry Spock experienced “resurrection,” especially looking at the matter as a sci-fi Christian. Death, after all, is not the last word. Death is “the last enemy to be destroyed” (1 Cor. 15:26). The complete story of Spock’s death and return serves as a far better parable of the truth we know in Jesus than Spock’s death, however noble and self-sacrificial, would have been on its own. The good news of Easter is that, because Jesus Christ lives, there indeed are, in Spock’s words, “always possibilities.” 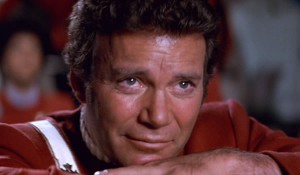 Until very recently, I had planned to put Spock’s death on top of this list—but, the more I thought about it, the more I realized that Star Trek II really is Kirk’s story, not Spock’s. He moves in a clear character arc, from feeling “old” and “worn out” to feeling “young.” Some fans have wondered whether that last scene makes sense, logically or emotionally. After all, Kirk’s closest friend has just died; and the beginning of Star Trek III will establish that Kirk isn’t, in fact, taking it in stride. How can Kirk say, as he does, that “all is well”?

I have gone back and forth on the question (because, as you now know after this past week, I’ve thought about this film for far too much of my life). I suppose these fans have a point. But every time I watch Kirk say he feels young, and that all is well—darned if I don’t believe him! Shatner doesn’t miss one beat or note of his performance in the entire movie, and the last scene is no exception. He has no logical reason to say “all is well,” he has, perhaps, no solid emotional reason to be feeling “young”—but he is, as he says, gazing upon new life, as the still-forming Genesis Planet spins in orbit around a new star. “And,” he adds, “if indeed Genesis is life from death, then I must return to this place again.”

And if… Those are pow 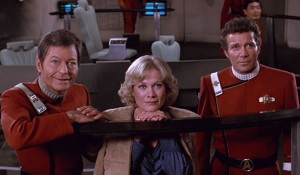 erful words, words that invite us to imagine, to dream, new possibilities, new outcomes, new resolutions to “no-win scenarios.” Sometimes, the “ifs” we entertain are mere wishful thinking. But sometimes they come to us from outside ourselves, gently beckoning us to follow, to trust, to come and see where they lead.

I like to think that’s what Kirk is experiencing in those final few moments that we see him on the Enterprise bridge. He doesn’t quite know how, or when, or where—but he is being persuaded, from a source outside himself, that a path to new life, new possibilities, new beginnings, will present itself. Besides, he’s surrounded by suggestions that such a way may already be being opened: the stranded crew of the Reliant will be rescued… Carol Marcus is back in his life… and even, if those deleted scenes are to be trusted, his son and Saavik may be sparking young romance. These are all tentative, hesitant steps toward new life… but they are being taken. And for these reasons, I think, Kirk can say, “All is well.”

Kirk is at this moment perhaps not unlike the fifteenth-century English Christian mystic Julian of Norwich, whose spiritual dwelling in the presence of the risen Christ led her to say, famously, “For this is the Great Deed that our Lord shall do… He shall make all well that is not well. How it shall be done there is no creature beneath Christ that knoweth it, nor shall know it till it is done… All shall be well, and all shall be well, and all manner of thing shall be well.”

And so, ultimately, Star Trek II ends on a note of benediction… and the film concludes, in fact, with the highest benediction Star Trek has to offer…