For an episode in which the audience hears that everything is all wrong, “Yesterday’s Enterprise” gets almost everything right.

The premise is high science fiction, marking, as far as I can recall, the first time Trek dealt with a theory of multiple, divergent timelines. It’s another Trek tale about “fixing the timeline,” but the franchise had never before tackled this trope in quite this way. Once that kinda cheesy-kinda cool camera trick takes place as the Enterprise-C emerges from a  temporal rift, we are left with characters who both are and aren’t the characters we’ve come to know. It’s a little unsettling. It’s supposed to be, for the characters are unsettled themselves, as that exchange outside the ready room between Crusher and Geordi—well, alternate Crusher and alternate Geordi—sums up: “We may not even be in an alternate time line.” “Yeah, who knows if we’re dead or alive?” I’ve grown used to such sci-fi now—I watch Doctor Who, after all—but, as I did to “Where No One Has Gone Before,” I reacted to this with a great big, “Whoa!” 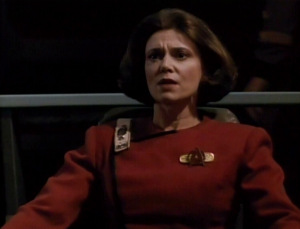 Trek’s shifting attitude  toward timelines may have been thanks to scientific theories about the nature of time that were gaining general popular acceptance in the late 1980s through such works as Stephen Hawking’s A Brief History of Time. I also think, however, it reflects the growing maturity of the franchise. For all my continuing admiration of the original series (which has, in many ways, aged better than has TNG), I can’t imagine it attempting, let alone accomplishing, an episode like this one. This sophisticated script, smartly acted (with special appreciation for Tricia O’Neil’s Rachel Garrett—you never doubt this captain deserves to sit in the center seat of Starfleet’s flagship), directed with feature film-like quality, stakes out bold premises and never wavers from them. It nearly effortlessly blends science, philosophy, romance, and space-opera-style action into an episode that richly deserves the high marks it regularly receives in polls of fan favorites.

Even so, “Yesterday’s Enterprise” isn’t perfect, especially when considered with sensitivity to stereotypes. 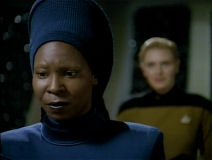 I do enjoy Whoopi Goldberg’s performance as Guinan; I was very excited when she joined the TNG cast at the second season’s start, and found the character a welcome addition to the crew. In retrospect, though, Guinan fits, in many ways, the stereotype of the “magic Negro.”

Film director Spike Lee spoke about this stereotype during a visit to Yale University in 2001. According to the Yale Bulletin and Calendar, “Lee cited four [then-]recent films in which there is a ‘magical, mystical Negro’ character: The Family Man, What Dreams May Come, The Legend of Bagger Vance, and The Green Mile… [Lee] was unreserved in his criticism of this new characterization of blacks, posing to his audience the question: ‘How is it that black people have these powers but they use them for the benefit of white people?… [Hollywood is] still doing the same old thing… recycling the noble savage and the happy slave.’”

Now, technically, Guinan isn’t a human being. But she is the first and (excepting Malcom McDowell’s Dr. Soran in Star Trek: Generations), the only major El-Aurian character in all of Trek, and she is portrayed by a human, African-American performer.

Is Guinan nothing more than a “stock” character—flat and two-dimensional? I am hard-pressed to define her character in terms that don’t primarily emphasize her mysterious, mystical traits—especially in “Yesterday’s Enterprise.” Maybe that is my problem, but maybe it is a problem with the character being little more than a stereotype. Her primary function in this episode is to express, in vague but definitive ways, special knowledge that “this [timeline] isn’t right.” Even Picard, her close friend, defines her this way: “There are many things about her species we don’t understand [emphasis added]… I’ve made my decision. I’ll go with Guinan’s recommendation.” Picard’s comments seem a sizeable step backward for a franchise that prides itself on a commitment to racial equality. Although earlier in the episode Picard objects strenuously to sending the 1701-C back based “solely on [Guinan’s] intuition” (“Not good enough, dammit,” he thunders, as only Sir Patrick can, “not good enough!”), he ultimately abandons reason and entrusts not only his fate but the fate of two crews—and the whole of reality—to Guinan because “there are many things about her species we don’t understand.”

She can be trusted, in short, because her people just know. Like magic.

Journalist and film critic Rita Kempley argues the “magic Negro” is a pawn: “Pawns help white people figure out what’s going wrong and fix it, like”—wait for it—“Whoopi Goldberg’s psychic in Ghost [1990, two years after this episode]. It isn’t that the actors or the roles aren’t likable, valuable or redemptive, but they are without interior lives. For the most part, they materialize only to rescue the better-drawn white characters.” Kempley’s description sounds a lot like Guinan to me. “Yesterday’s Enterprise” marks one of the few times we catch a glimpse of Guinan’s “interior life,” and it is solely presented as the plot device driving better-defined white characters (not only alternate Picard but also alternate Tasha Yar) toward the proper resolution.

I was reluctant to bring up this objection to an overall very strong episode, but I offer it for your consideration not because of some political correctness but because God’s people have a responsibility to expose stereotypes wherever we see them—even if it’s “just” in Star Trek. The stories we tell influence the way we perceive real life, and even “good” stereotypes remain stereotypes. Stereotypes ultimately limit and diminish us all because they keep us from seeing each other as the unique individuals God created us to be—much less as the new creations we can become in Jesus Christ, who was no stranger to the sting of stereotypes himself: “Can anything good come out of Nazareth?” (John 1.46). Stereotypes aren’t just lazy writing or lazy thinking; they’re a detrimental human point of view; and, as the apostle Paul teaches, from now on “we regard no one from a human point of view; even though we once knew Christ from a human point of view, we know him no longer in that way” (2 Cor. 5.16).

One of my denomination’s standards of faith talks about Christians’ task this way: “God has created the peoples of the earth to be one universal family. In his reconciling love he overcomes the barriers between brothers [and sisters!] and breaks down every form of discrimination based on racial or ethnic difference, real or imaginary… Congregations, individuals, or groups of Christians who exclude, dominate, or patronize their fellowmen [sic], however subtly, resist the Spirit of God and bring contempt on the faith which they profess” (The Confession of 1967, 9.44).

The Leap of Faith 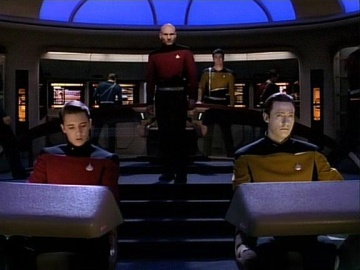 My reservations about Guinan aside, “Yesterday’s Enterprise” still offers a powerful parable of faith, of trust, of believing when there are no “reasonable” grounds for doing so. As I mentioned, Picard does, in fact, resist the truth Guinan is telling him throughout the episode’s first half. The point comes, however, when Guinan presents the captain with a stark choice: “We’ve known each other a long time. You have never known me to impose myself on anyone or take a stance based on trivial or whimsical perceptions… I’ve told you what you must do. You have only your trust in me to help you decide to do it.”

That’s more like it! Here, Picard decides to believe Guinan, not because “there are many things about her species we don’t understand,” but because he knows her and trusts her. His decision is born out of his relationship with Guinan, as our decisions to follow Jesus (or not) are born out of our relationship with him (or lack thereof).

Were I looking for a Scripture I could use this episode to illustrate, I might look to Luke 5.1-11. Jesus is at the start of another day of teaching, while Simon and his friends are at the end of a fruitless night of fishing. When the day’s lessons are done, probably as a frustrated Simon and company are looking forward to going home for some well-earned rest, Jesus tells them, “Put out into the deep water and let down your nets for a catch” (5.5) Simon replies, “Master, we have worked all night long but have caught nothing. Yet if you say so, I will let down the nets” (5:6). And so he does—and they catch “so many fish,” Luke tells us, “that their nets were beginning to break” (5:7).

That’s the response of faith. Jesus calls us to set sail for the deep waters, where very little is certain, where the unknown awaits, where it’s not clear how or even if we’ll stay afloat. The deeps can be as crazy and chaotic as a rift in the space-time continuum! But because the Master says so, and because we know and trust him, we go, and encounter God’s blessing. (As Luke tells the story, Simon didn’t even have the benefit of having known Jesus when this miracle occurred! Yet Simon trusted, had faith, all the same. If he could put out for the deep water barely knowing Jesus at all, how much more ought we be able to put out for the deeps, too, we who call already call ourselves his disciples!)

I don’t know whether I’ve adhered to this episode’s official title in choosing not to italicize the word “Enterprise.” Purists might argue it should be italicized, a la “The Enterprise Incident” from the original series. But I like the implication that flows from sticking with Roman type. This story is about more than a ship from the past: it’s about that ship’s—correction: that crew’s; those people’s—“enterprise” to carry out an errand of mercy (to coin a phrase). The 1701-C’s trek into the rift is noble and heroic, at an almost Tolkien-esque level. Castillo, Yar, and their skeleton crew are doing what’s right, despite the certain knowledge they will die in doing so. Yes, their efforts to save the Klingon outpost does prevent a terrible timeline, as Picard suggested to Garrett it might, and that outcome alleviates the tragedy to some extent. But neither crew, that of the 1701-C or of the alternate 1701-D, absolutely knew it would. Sending the 1701-C back through the rift—in other words, back into the deep—was an act of faith, an enterprise undertaken yesterday in the hope of a blessing. To borrow words from Paul, that hope did not disappoint.

Neither, ultimately, does this excellent episode, one of many fine stories The Next Generation would offer as, from season three on, the series finally hit its stride, found its unique voice, and did its part in making sure media, cultural, and genre history would, indeed, “never forget the name Enterprise.”

Next Time: Is the winner really whoever dies with “The Most Toys?” Rewatch the episode and join the discussion!