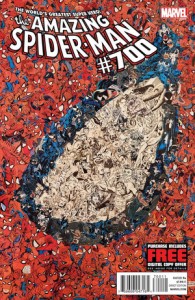 All of these comic book deaths were newsmakers.  Major media outlets covered these fictional deaths as having impacts on popular culture.  For the comic book companies, they helped generate sales.  For example, I bought two copies of Amazing Spider-Man 700 after a decade long break from buying a comic.  Despite these final chapters for our beloved superheroes, writers and publishers have been unable to keep most deaths stick for iconic, money making characters.

I would argue that comic book fans have come to expect a lack of permanence to character deaths.  We see Uncle Ben and his lack of return from the grave as the exception and not the rule.  The list of comic book characters who have died and rose again is nearly endless and includes Wonder Woman, Green Lantern, Aquaman, Batman, Daredevil, and Human Torch.  If you are a comic book character you really have not made it until you have died!  I can remember as we reached the end of the theatrical X-Men: The Last Stand and we mourned the deaths of Professor Charles Xavier, Jean Grey and Scott Summers, thinking that their deaths could not stick!  And as we entered one of the original post credit scenes within the Marvel Cinematic Universe, it was not shocking to hear the voice of Patrick Stewart foreshadowing a possible future installment where Xavier escaped the clutches of death.

When I was in college I took a Greek and Roman mythology course.  One of the professor’s stock declarations was that a character was just like Christ.  Hercules, Bacchus and others mirrored cycles of death and resurrection within their epic stories.  I believe my professor’s point was that Jesus and his story was recycling a timeless story found within multiple cultures.  But I, like C.S Lewis, see these myths pointed at Jesus, instead of being a cheap copy of this theme.  Jesus does not plagiarize this resurrection story, but the resurrection story leads us to the truth of Jesus’ story.  Lewis celebrated the resurrection cycle within The Lion, the Witch and the Wardrobe with Aslan’s death on the stone table.  Death and resurrection is a fact that Christians are familiar with; a theme we cannot escape.  The truth of the story and the fact that it has deep meaning speaks deeply to our souls.

If you follow the news, you likely are aware that The Amazing Spider-Man has ended its nearly 50 year run with issue 700.  As part of the Marvel NOW! reboot, the main Spider-Man title will be The Superior Spider-Man, with a non Peter Parker Spider-Man charging into the future.  To be fair, Peter Parker’s legacy, memory and relationships will still have a gigantic imprint on this new title, despite Parker’s “death”.  This is not, in fact, the first time that Peter Parker has died, with Marvel previously making news killing their hero in the Ultimate Universe in 2011.  Of course since that universe is an alternative storyline that death may now be final.

I love superhero stories.  In many ways for me they are our modern epic mythology.  The clichés within them speak to real spiritual truth for me.  I expect this story also to mimic the resurrection cycles of the Greeks, Romans, and multiple other cultures.  And I believe with near certainty that Peter Parker will return.

I believe Peter Parker will have his three days, be it three months or three years or even longer.  I believe Parker will arise from the belly of the whale a resurrected man.  Many will probably view his return as cash grab.  But as our world needed Jesus to return from death, I believe that the Marvel Universe needs Peter Parker, and maybe even The Amazing Spider-Man title, to provide us quips and a picture of salvation in our real world.

Do you believe Parker will rise again?