As it did in the run-up to director J.J. Abram’s 2009 reboot (or was it?) of Star Trek, IDW is offering a four-issue miniseries designed to set the stage for the sequel, Star Trek Into Darkness. The first issue is on the stands now, and the SFC’s Daniel Butcher and Mike Poteet are here to weigh in.

Do you feel this story is a good representation of the Star Trek franchise?

Mike: Absolutely. David Messina’s art accurately captures the look of the new Trek timeline, lens flare and all—the Enterprise in particular looks gorgeous (even when being destroyed in Spock’s dream sequence as the issue begins)—and Mike Johnson’s script nicely captures the characters’ voices while also imbuing them with an original series “feel” long-time Trek fans will appreciate. The story, plotted by Johnson and Roberto Orci evokes that singular old-school Trek atmosphere of adventure and intrigue as the crew journeys to a bona fide “strange new world,” an element whose absence was keenly felt in the 2009 film. I can’t honestly say this issue breaks any new ground—the problem of cultural contamination and Prime Directive violation is a tried-and-true source of drama for the franchise, a theme upon which only 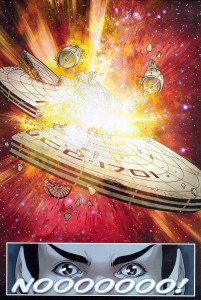 so many variations can be played—but it’s a more than serviceable first act.

Daniel:  As this review will show, Star Trek Countdown to Darkness had to fight against the fact that despite Star Trek being one of my earliest influences I had walked away from this fandom.  In short, I am not the core audience, and might even be considered a hostile one. Yes, I do feel this story is Star Trek. We have an Enterprise, Kirk, Spock, and even McCoy (off camera). The landing party even has a Red Shirt in it–I wonder what will happen to him?  The biggest personal issue is this is not my Trek.  Kirk is designed to look like Pine and not Shatner, and really Shatner is still my Captain.

Mike: I liked the creative team’s choice to take advantage of comics’ ability to show truly alien aliens. Although the natives of Phaedus could no doubt be easily brought to the screen via CGI today, fans of the Original Series would never have seen Kirk and Spock interacting with such creatures, making their appearance here doubly enjoyable.

My favorite moment, unfortunately, was also the briefest. The issue’s last, full-page panel presents a genuinely unexpected “reveal” that will leave long-time Trek fans “fascinated” (as Spock would say), to say the least. Orci and Johnson know their series continuity, and have cooked up an intriguing transposition of it into the Abrams timeline.

Daniel:  I really enjoyed IDW’s choice of paper.  It really seemed like a high-quality ,somewhat glossy stock that was a vast improvement over the pages available to me when I read single issues on a regular basis as a teenager!

Mike: I didn’t have any visceral dislikes. As the first act of a four-act tale, the issue can only do so much, and its “negatives” are more accurately simply the limitations inherent to any set-up issue. Plot lines are introduced, not yet resolved; character arcs are hinted at, not yet fully accomplished. But it’s hard to classify these as “flaws.” I would have to suspend judgment until the fourth issue, when the tale is told. I will point out that the script’s few attempts at humor are surprisingly dry, given the witty sparkle both Chris Pine and Zachary Quinto brought to the characters of Kirk and Spock in 2009.

Daniel:  I honestly do not feel like a lot happened!  The entire issue is really a setup for things that will come down the road.  The issue puts the Enterprise and its crew in a position for action to break out, but not a lot of that action occurs here.  I compare that with Star Wars #1 which opened with a X-Wing battle.  This lack of action really could be part of the beast of being a #1 in a mini-series.  I know the authors have a full story arc, but an arc in a series like this is probably best read in a trade with the complete story instead of a single issue.  Currently, I am reading a storyline from the 1960s in which Aqualad is brainwashed into becoming a Go-Go dancer.  I feel like more is going on that story.  But I am more bought into Aquaman’s universe and I know that since I am reading it from a trade that the entire story will be resolved before I hit the last page. 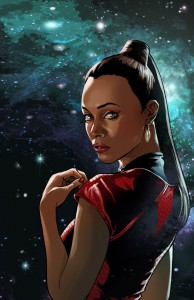 And when did Mr. Spock become a college kid sharing noodles in his dorm room over a video rental with his girlfriend?  I am somewhat confused by Spock’s relationship with Uhura, because it seems so emotional and my Spock template is 1960s Nimoy, leaving me wondering if that Mr. Spock would have entered into a romance with a highly emotional human.

Do you feel this story conforms to canon?

Mike: Since “canon” in the Abrams Trek timeline is still an open question, the most I can say is that it doesn’t contradict anything in the 2009 film, and that, as alluded to earlier, it opens up a possibly interesting reinterpretation of previous series lore on the last page. Given Orci’s official involvement in the new movie, it’s likely that, as the Countdown comic book series before the first movie did. Countdown to Darkness will effectively set the stage for the sequel without becoming a “must-read” storyline.

Daniel:  I am not fully aware of the current state of Star Trek canon since the 2009 movie.  I fully bought that this story fit within the new timeline established by J.J. Abrams.   Of course, it should fit within that canon as one of the writers is Roberto Orci who co-wrote both Star Trek and Star Trek Into Darkness.

When did the Prime Directive become so big of a part of the Kirk story?  I had to confirm with my local Trek expert to make sure I was correct.  In the 1960s the Prime Directive was a minor plot device. In Star Trek: The Next Generation they began to throw out the Prime Directive like candy at a parade.  If this was Picard and not Kirk I would find it easy to accept its prominent use in this issue.  But as Kirk attempts to find a policy loophole to the directive, I wonder if the authors were more influenced by NextGen than the original series.

Mike: I was glad to see the creative team dealing head-on with Spock’s lingering guilt over his failure (as he sees it) to rescue his mother from Vulcan’s destruction in the first film. When people of faith talk about forgiveness, we are often so concerned with God’s forgiveness of us or our struggle to forgive others, we fail to pay proper attention to the importance of forgiving ourselves. I hope the rest of the story, as well as Into Darkness itself, will offer us some glimpses into Spock’s emotional struggle to move on with his life, and that from them we may glean some applications when we face that struggle ourselves. 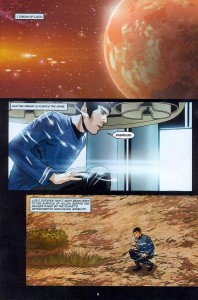 Dan:  Spock seems to be trying to find himself.  We find Spock attempting to hold to his beliefs about logic and avoiding emotion, fearing that even a small amount of emotion will destroy him and those he loves.  I think that struggle to find one’s identity is one that many of us can relate with.  And based on the books I have seen in the “Christian” section, I believe many of us struggle with finding our identity in Christ.

Does this make you more or less excited about more Star Trek Into Darkness?

Dan:  Are you going to be mad if I say I am now less interested?  With the announcement of J.J. Abrams directing Star Wars Episode VII, I have officially moved to a position where I want Star Trek Into Darkness to do really well and be really well done, mostly because I want the momentum to be heading towards my favorite Disney franchise.  So there is part of me that really wanted to like this issue.  Instead it kind of took away some of the potential untapped interest I had.  To be fair, if I was viewing this as a complete story arc my view might be different.

I can understand how it should have made me ready.  I was a big fan of the Heroes free web comics.  Those filled in the gaps for me and even took the story in new directions.  Many of those resolved in one shot. But even those that did not moved the action forward.  The Heroes comparison may not be fair, but they both have Zachary Quinto stylized characters within them, so I cannot avoid it.  For me those comics were effective as I got excited about the show and have bought two collected volumes of this free web content.  And I always got excited talking to one of my best friends about what happened in the latest installment.  If he wanted to read this issue though, I would tell him to pass no matter how excited he was for Star Trek Into Darkness.

Mike:  Mad? No! To be honest, this issue doesn’t add to my excitement for the new film, but neither does it detract from it. I’m going to see the new movie regardless of this miniseries. I hope the comic will prove a strong storyline, but, in the end, I expect it will be quickly forgotten once Into Darkness is in theaters, no doubt making waves throughout Trek fandom and the general movie-going public alike.

Dan:  Oh, heavens no.  I’m sorry, Mike, but I just cannot do it.  I know it is just four issues, but I’m finding getting single issues is not as easy as I thought it would be.  I thought the major bookstore near my work would have issues.  But that would be a no, and they have shown to be 3 weeks or more behind the direct market.  Why can’t a major bookseller get a title on its release day? The closest comic shop, which is a 40 minute round trip for me only had a few copies, all claimed by someone before they arrived (maybe that is a clue you should order more).  So I was forced to buy online and pay shipping, pretty much doubling my price.  So basically as much effort as it took for me to get it, which could have put me in a bad mood when reading it, it’s just not worth the payoff to seek out issue #2. I really miss the days when I could just walk to the corner gas station and get the newest copy of X-Men.

Mike:  Well, again, Daniel, no worries. I will not be sticking with this miniseries either, but only because time is short and quatloos are tight. Perhaps I will go back and read the finished storyline when it is collected as a trade paperback (although IDW’s TPBs of the ongoing Trek monthly so far seem too slim and too expensive).