The Land of Oz gets the John Ford treatment in this intriguing and beautiful new series from Big Dog Ink.

As Disney hopes to demonstrate in a few weeks with its Oz the Great and Powerful, the fantasy land that L. Frank Baum created in 1900 remains as popular—and as malleable—as ever. Baum set out to create a distinctively American fairy tale; as a result, Oz shares America’s capacity for adaptation and reinvention. Both lands are places where anything seems possible.

How fitting, then, that a relatively new ongoing Oz comic book series from Big Dog Ink transposes Baum’s wonderful world over the rainbow into that most American of keys, the classic western! The Legend of Oz: The Wicked West reimagines Dorothy as a no-nonsense Kansas “cowgirl,” Toto as her trusty stallion, and Oz as a rough-and-tumble frontier where a Yellow Brick Road in woeful disrepair leads through arid deserts full of magic and monsters. This Oz doesn’t look much like Disney’s, or MGM’s from the 1939 Judy Garland movie musical; but, as Baum originally described it in The Wonderful Wizard of Oz, it is indeed “a country that is sometimes pleasant and sometimes dark and terrible.”

Writer Tom Hutchison introduced his take on the classic tale in a 2011 six-issue mniseries, and the title is now four issues into its ongoing monthly run. In Hutchison’s Oz, “Gale” (Dorothy goes only by her last name) has been following the Yellow Brick Road for three long, trying years before she runs afoul of the Wicked Witch of the West, who covets her magical ruby spurs and ruby-handled pistols.

In quick order we meet intriguing new versions of the traditional traveling companions. The “Tin Man” is an enigmatic stranger who wears a wide-brimmed hat, long overcoat, and sheriff’s star over an apparently metallic body, but who says “taking care of the law is gonna require a little more heart than I’ve got.” The Scarecrow is a mute (or is she?) young girl who resembles a Native American and who acts as Gale’s Sacajawea, and who is literally stuffed with straw: when she offers Gale some of her innards for a pillow one night, Gale remarks, “That is the creepiest and the kindest thing I’ve ever seen, all wrapped up together.”  The Lion wears thick white face paint and a crown—by choice: we learn that he is “no coward in the strictest of terms; let’s just say he’s a sensitive soul and leave it at that.”

The miniseries traced this curious company’s trek to the Emerald City, along more or less familiar lines, with clever modifications of accepted Oz mythology along the way. In the final two issues, however, Hutchison raised the stakes and struck out on his own. He delivered a truly dynamic showdown between Gale and the Wicked Witch, with an unexpected but completely reasonable resolution for the victor; and he introduced a second and thoroughly original plotline focusing on General Jinjur. Long-time Ozophiles will remember Jinjur as the young woman whose all-female Army of Revolt briefly takes over the Emerald City in The Marvelous Land of Oz. Here, however, Jinjur is no joke at suffragists’ expense, but the cunning power behind the Wizard’s throne, who isn’t interested in the Emerald City for its emeralds. I’ve only read through issue #3 of the ongoing series, but I’m looking forward to seeing how Hutchison continues to blend bits of Baum’s books with his own quickly thickening plot.

Legend of Oz is a beautiful book. Alisson Borges deserves high praise for his striking character designs. His “Gale” is no little girl or Judy Garland, but a tall, muscular “cowgirl” whose hair may be in pigtails but whose face says she means business. Borges occasionally trends toward “cheesecake,” although he never, within the pages of the book proper, draws the sex object who lounges on some issues’ alternate covers, which I’d suggest avoiding. On the whole, Borges simply presents a mature, athletic Dorothy whose determination shines through.

Borges’ “Tin Man” is also visually arresting—think a mix of Johnny Cash and Kenny Rogers, only mysterious and menacing—as are his lithe and likeable Scarecrow (envisioned as a Native American, but without any offensive “Injun” overtones, at least that I can see), his heavily made-up Lion, and—one of my favorite elements so far—his ferocious Field Mice, who evoke both Mouse Guard and the Ewoks and are way cool. (I was disappointed in Borges’ ultra-traditional take on the Wicked Witch of the West, although he uses her to great effect in the showdown with Dorothy.)

The lush, detailed Borges provides for the characters also impresses. Borges’ Oz draws on archetypes of the “wild west”— stark and beautiful desert; a seedy saloon; a mining town—but entirely underground—as well as elements clearly inspired by the 1939 movie that lend an air of familiarity (most notably the Wizard’s throne room). And colorist Kate Finnegan brings it all to life with vivid hues, expertly applied. 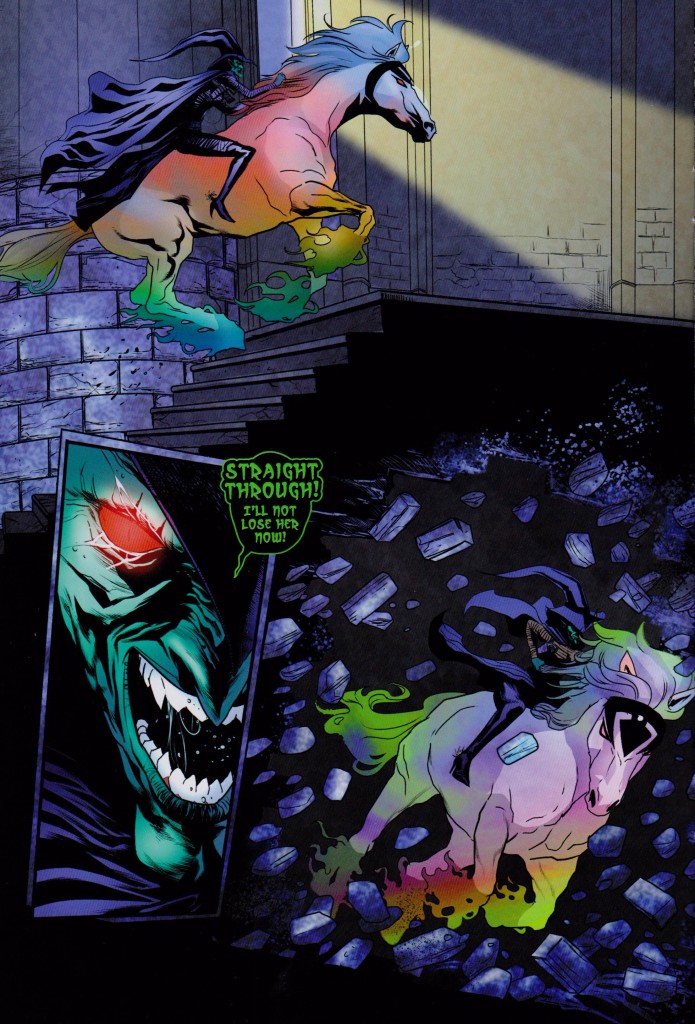 Legend of Oz is a feast for the eyes and a pleasure for readers with previous Oz knowledge. Even if Judy Garland is all you know of Oz, however, I recommend the book as a rich experience in its own right. It isn’t for young children—the Wicked West is sometimes bloody, and occasionally sexually suggestive—but older teens and up will appreciate the engaging (and often humorous) scripts, the clearly defined characters, the obvious affection for the fantasy and western genres, and the spectacular art. Hopefully, it will be some time before these friends from Oz ride off into the sunset.

3 comments on “Comic Review: “The Legend of Oz: The Wicked West””