In 2012, The Sci-fi Christian brought to you its first annual Battle Royale! You witnessed the likes of various movie, television, and video game characters pitted against one another in epic battles! Last year, the SFC contributors chose the characters that you were able to vote for throughout the tournament. This year, we’re doing things a bit differently.

The second annual Battle Royale will begin in March, only this year you get to decide who’s involved! Here is how this will work:

1. In the comment section below, write in the character you wish to be featured in this year’s tournament (CHARACTERS FROM LAST YEAR ARE NOT PERMITTED)
2. You can only choose ONE character from either movies, television, or video games (This does NOT include superheroes from the above mediums as they might pertain major advantages).
3. Once we receive 16 characters (within two weeks’ time), the tournament and bracket will be announced.
4. The following day, the tournament will begin.
5. Each round will allow for one week of voting.
6. Once we reach the semi-finals, a short story depicting the current battles will accompany the winning outcomes.
7. Finally, if your character is featured in the FINALS, you will receive a prize. 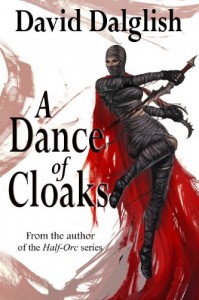 Prize for 2nd place finish – A digital copy of A Dance of Cloaks (Shadowdance Trilogy Book One).
David Dalglish’s Shadowdance Trilogy is soon to be published by Orbit Books. This is a unique opportunity to receive a self-published version of the first book in the series with the original cover art, before it is discontinued.

No CURRENT SFC contributors are eligible for the tournament and contest.

Hear more about this year’s Battle Royale in the latest episode of the podcast up now (February 22, 2013) featuring Matt Anderson and me!

Check out our interview with David Dalglish here.