I have been slowly reading through Marvel’s Ultimate Universe in the last few years.  This universe is gritty, politically charged, realistic, and often has impactful consequences for its members.  In mainline Marvel lore, characters that die tend to quickly come back to life, whereas this is  typically not the case in the Ultimate Universe: if someone dies, they are not coming back.  The realism of the Ultimate Universe often leads to a fair amount of reflection, something that honestly shocks me when I read comic books.  This week, an Ultimate title hit my book bag that I found challenging to my beliefs about faith.

Ultimate Comics: Captain America collects the limited series of the same name by Jason Aaron and illustrated by Ron Garney.  Captain America, Steve Rogers, joins a Special Forces team to discover the source of Super Soldiers being developed in North Korea.  Consequently, Cap uncovers a conspiracy orchestrated by his successor, Frank Simpson, the Captain America of the Vietnam War who disappeared during that conflict.  Simpson, having seen the horrors of war and questioning the motives of American political leadership, has decided to provide the enemies of the United States with the Super Soldier technology for self-defense.  Rogers tracks down and is captured by Simpson, leading to a confrontation by two Captain Americas: one who believes in the flag, apple pie, and God; and another who believes the United States has been corrupted in a Godless world.  Which Captain America will prevail in this epic battle of body and mind? 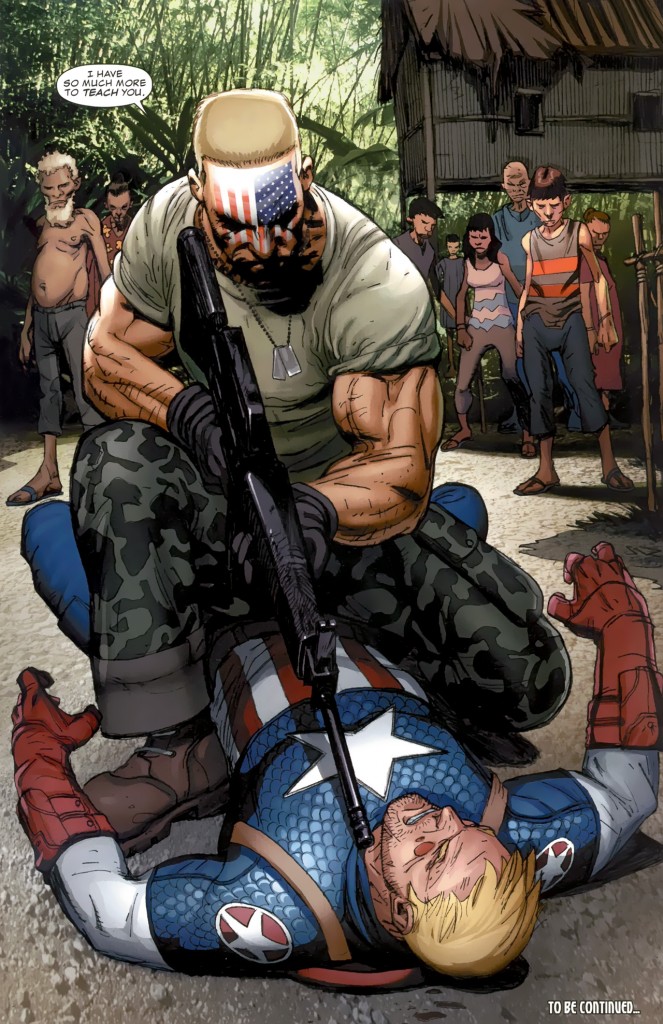 One one Cap can survive!

Captain America, Steve Rogers, is one hero who wears his faith on his sleeve.  He stands firmly behind God and the United States of America.  Even in the recent film adaptation of The Avengers, he affirms his faith upon meeting the Norse gods, Thor and Loki, stating, “There’s only one God, ma’am and I’m pretty sure he doesn’t dress like that.”  Still, this storyline clearly tests that faith.  Frank Simpson’s goal is to convince Steve Rogers that what he believes in is false.  He starts with his beliefs in country, focusing on the historical facts and excesses from American history that led to his own disillusionment.  As Simpson proceeds with his  “educational” rant, he is dismayed with Rogers’ continued belief in God and his use of prayer.  Simpson arranges an age old confrontation with God: a five minute period for Rogers to petition his Lord before he kills the hero.  Simpson dares God to provide a timely miracle.  Of course he expects no miracle and a broken Rogers to abandon his false faith.  While I refuse to spoil the story by revealing if a miracle emerges, I will say the conclusion of the five minute challenge is interesting and will likely lead to reflection on the contrast of man’s ways versus God’s ways.

Despite Simpson’s immoral action, he does leave Rogers with something to consider.  Captain America in the Ultimate Universe is a soldier.  He believes in his country and he believes in God; but he is sometimes used as a covert killer that could be labeled an assassin.  Captain America’s motivations are to benefit the greater good, but do his actions merit support from God?  Cap is asked if his actions are supported by God or by Satan.  Jason Aaron never provides us with an answer and I am glad that he does not.  Though Ultimate Comics: Captain America is not meant to be a religious tome, it leaves those of us with faith to grapple with our views towards righteous war and violence as a tool for moral justification.  How do we reconcile the warrior King David battling his neighbors under God’s authority, with the divine Jesus who tells us to turn the other cheek?  It is not just superheroes who need to tackle this dilemma, but also us Christians as we face a world that challenges us to understand what we believe.  And like Aaron, I leave you to that struggle on your own.  I just hope that if faced with a similar real life situation that I could have the grace and moral fiber to respond to these questions in a practical manner matching the final frame of this title.  A man comfortable with himself, Rogers moves forward both as a soldier and a believer.

I suggest you pick up a copy, and use this superhero story to kick off the internal struggle within yourself.