“The Crimson Horror!” exults the Doctor at one point in the (brilliantly conceived and executed) flashback portion of last week’s adventure. “That’s a good name!” Not only is it a good name, it’s a good episode—the strongest in “series 7B” so far.

Its strength is due largely to the return of Madame Vastra, Jenny, and Strax. “The Crimson Horror” is practically proof of concept for a spin-off starring this trio. The Doctor doesn’t show up (at least, not clothed and in his right mind) until nearly seventeen minutes in, and I didn’t miss him. Nothing against Matt Smith, but Neve McIntosh, Catrin Stewart, and Dan Starkey prove more than capable of commanding audience attention—aided and abetted, of course, by Mark Gatiss’ sparkling script. As Strax, Starkey clearly relishes his lion’s share of the script’s snappiest lines, from counseling the use of “scissor grenades, limbo vapor, and triple-blast brain splitters… just generally” to threatening his horse with “summary execution.” I see validity in some long-time Who fans’ laments that the Sontarans have been “reduced” to comic relief; I’d probably feel the same were some future Star Trek series to turn the Romulans, say, into cosmic clowns. On the other hand, I can’t imagine tiring of this adamant and amusing warrior, nor of the Veiled Detective and everyone’s “favorite lock-picking” (and arse-kicking) “Victorian chamber maid.” Now that Torchwood has run its grim and joyless course, let’s see the Madame Vastra Adventures between future seasons of Who!

Taking the Measure of Mrs. Gillyflower 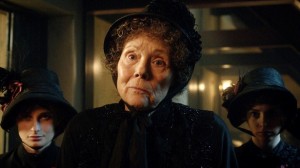 Mrs. Gillyflower is less a real character than a caricature—the embodiment of religion gone horribly wrong—but Rigg fully commits to the part, perfectly capturing the fevered and malicious self-righteousness of those whose misplaced eagerness for God’s judgment leads them to judge others. Only the brightest and the best for Sweetville!

If I thought sound theology would’ve swayed Mrs. Gillyflower, I might have pointed her toward Amos’ words of warning: “Alas for you who desire the day of the Lord! Why do you want the day of the Lord?… Is not the day of the Lord darkness, not light, and gloom with no brightness in it?” (5.18, 20). It’s one thing to pray, as Jesus taught us, “Thy kingdom come.” It’s quite another to believe ourselves divinely chosen agents of purification, responsible for separating the wheat from the tares (Matthew 13.24-30) as we build the New Jerusalem by force (or far-fetched schemes involving baths of “repulsive red leech,” bell jars—was this a two-step preservative process?—and ballistic missiles). Arguably no early Christian lived with a more fervent eschatological expectation than did the apostle Paul, but even he demanded to know, “Why do you pass judgment on your brother or sister? Or you, why do you despise your brother or sister? For we will all stand before the judgment seat of God” (Romans 14.10-11). God save us from Mrs. Gillyflower’s smug, sinful arrogance!

How ironic that this episode aired in the weekend before Mother’s Day. The scene in which Mrs. Gillyflower renounces Ada (Rachael Stirling, in the most emotionally convincing performance of the night) with a mean-spirited misquotation of the Bard is heart-breaking. She also spitefully tells her daughter, “You know I cannot bear to look at sick people… There can be no place for people such as you. Only perfection is good enough…” In her mother’s eyes, Ada is nothing but a “clawing, slobbering” nobody who might as well share the crimson skin of the “rejects” washed down the canal.

Again, how different this sanctimoniously sermonizing, “Jerusalem”-singing moral crusader is from the God we know in Jesus Christ! Jesus looked at multitudes of sick people and “had compassion for them, because they were like sheep without a shepherd” (Mark 6.34). He restored health to the ill, sight to the blind, mobility to the lame. He chose those who are “weak in the world to shame the strong” (1 Corinthians 1.27). Our divine judge is also our divine physician, who came, as another old hymn says, “softly and tenderly” calling “those who are sick,” spiritually and physically (Mark 2.17).

Through Isaiah, God asks the Jewish exiles, “Can a woman forget her baby, or disown the child of her womb? Though she might forget, I never could forget you… As a mother comforts her son, so I will comfort you” (49.15; 66.13, NJPS). Rhetorically, God’s question presupposes a negative answer; yet even if the presumably strong bonds of human motherhood do break, God promises, the compassion binding God to Israel will not. We can trust God to be a better mother to us than the best mortal mother—let alone such a miserable mom as Mrs. Gillyflower!

Do We See What She Sees? 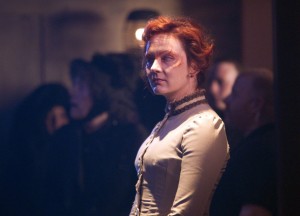 In Western storytelling, blindness is frequently a symbolic condition. Ancient prophets and poets like Tiresias and Homer were (according to Hans Biedermann’s Dictionary of Symbolism, 1989; New York: Meridian, 1994) “portrayed… with an indication that they had been struck blind upon penetrating secrets reserved for the gods” (p. 42); and ever since, blind characters can often “see” truths sighted characters can’t. Sci-fi and fantasy fans might think of Dr. Miranda Jones (“Is There In Truth No Beauty?,” Star Trek), Spider-Man’s mentor Madame Web, Destiny of the Endless from Neil Gaiman’s Sandman graphic novels, or even Mama Odie (Disney’s The Princess and the Frog). (Thanks to tvtropes.org for a crash course in genre examples!)

Is Ada another such blind character who “sees” what others don’t? Her scenes with the red-stained Doctor remind me of the blind hermit’s encounter with the Creature in Bride of Frankenstein (1935), and cover much the same theological ground. Ada affirms to the Doctor that it is not good to be alone (see Genesis 2.18) and shares with him her “vision” of a future in which she is redeemed, confident that her mother’s “New Eden” has room even for the outcast. (Matt Smith’s physical movements in these scenes borrow more than a little from Boris Karloff, underscoring the parallels.) But I’m especially fascinated by the name Ada bestows upon the Doctor: “dear monster.”

This episode itself gives no suggestion that the Doctor is a monster. “Monster” is not a dominant way of thinking about the character; as Steven Moffat said in an interview from 2010, the Doctor is “a man who fights monsters but never becomes one.”

And yet… River Song cautioned the Doctor that he was becoming something monstrous in “A Good Man Goes to War” (6.7). In “The Wedding of River Song” (6.13), the Doctor, realizing he’d gotten “too big,” declared his intention to retreat to the shadows—and, this week, he describes his enemy as “hanging around, lurking in the shadows.” And don’t forget the implicit comparison of the Doctor and the “Crooked Man” two weeks ago, in “Hide” (7.9). In that episode, too, another young woman with special sight issued a warning about the Doctor.

Perhaps the now tiresome obsession with Clara’s identity is the real “crimson horror” this season, a red herring distracting us from the more pressing question must never be asked, the first question awaiting us us at the end of our inexorable slouch toward Trenzalore: “Who is the Doctor? Doctor who?”

Might Moffat and company be hinting that our beloved Time Lord is more monstrous than we have guessed?

What did you think of “The Crimson Horror?”

Except as noted, Scripture quotations are from the New Revised Standard Version. “NJPS” is the Jewish Publication Society TANAKH translation.