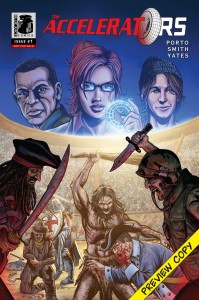 The Accelerators is a new independent title from Blue Juice comics written by R.F.I. Porto and illustrated by Gavin P. Smith. It has gotten a lot of buzz in the comic book community thanks to the support of AMC’s Comic Book Men. But would Mike and Dan have the same enthusiasm for this time travel story?

Does this issue make a good start for The Accelerators series?

Mike: Well, it does everything a first issue should do. It introduces a high concept: powers unknown are snatching people from throughout history—pirates, cavemen, conquistadores, even someone who looks like Sigmund Freud, you name it—and throwing them together in an arena to fight each other to the death. It identifies our main characters: Lex, the physicist from 1965 who is leap-frogging her way forward in time; Bertram, her antagonist, the Inspector Javert to her Jean Valjean, the Tommy Lee Jones to her Harrison Ford, a no-nonsense military man who also happens to be Lex’s husband; and the as-yet unnamed (I think—I looked back through the issue and saw no moniker) teenage slacker/“closet geek” from 1991 who gets swept up in Lex’s running through the corridors of the time-space continuum. It establishes some of its universe’s rules: Lex’s time travel is accomplished by a device called a “donut,” which can only transport people forward, not backward. The issue does all this—but didn’t really make me care.

Dan: Well, this is an introduction. So I think the question is how does issue #1 work out as a first impression. And I would say it does pretty well. The issue establishes the characters and the problem very quickly. And it gives us good context to the Games which I believe we will see a lot more of in the future, I hope. So I believe the creators do a good job at making it clear what the dynamics of this story will be and sets us up for the future.

Is this issue a good example of the time travel genre?

Dan: Usually we would ask about canon, but with this being a kickoff we don’t need any stinking canon. Really this story is making canon. This is what we know to date. Time travel is possible in one direction, to the future. So unlike time travel in stories like Bill and Ted’s Excellent Adventure or Heroes, the traveler cannot yet undo past events. The device for time travel is external to the traveler. You do not enter the machine like a TARDIS. But, sometime in the future someone is able to reach backwards and grab individuals to take them into the future present to fight in the Games. But it is not clear if this is a trip backwards or just reaching back to grab the kidnapped.

Mike: I think so. I like the idea that the time travel is one-way only; I haven’t seen that too often. And the idea of warriors drawn from the temporal hither and yon to duke it out is intriguing. The issue has a nice quality of breakneck breathlessness to it, the same tone I associate with that über-time travel adventure, Doctor Who. But it’s just not enough. The characters are flat, easily recognizable stereotypes (at least at this point—I acknowledge it’s just the first issue, but I also get few hints of greater depth to come, beyond the marriage of Lex and Betram); and, without rich characters, no story of any genre can suceeed.

Dan: Well, I love the cover. My cover is autographed by the cover penciller Walt Flanagan of AMC’s Comic Book Men. In my order I also got a postcard sized print from the book that shows all four of the Comic Book Men and is signed by Walt, Mike, Ming and Bryan. I have a lot of respect for the large amount of knowledge that Flanagan has about comics and superheroes. So I honestly, really like that and any or all opinions may be slanted due to that cover. Sadly the deal I took advantage of is over. It is probably one of the few pieces of comic book memorabilia I have in the house.

Mike: I’ve indicated above some of the things I liked. I also chuckled to see our teenage protagonist and his friends walking out of a movie theater whose marquis announced not one, not two, but three time travel movies—clever.

Dan: Honestly, I do like the cover. It really does foreshadow what you find in the comic; the three main characters, the doughnut, and a somewhat bloody image of the games with soldiers from different eras battling each other.

Okay, seriously now. I am a trained historian and my expertise is military history. I was the kind of guy who had trouble settling on one topic. So I like to joke that my interest was in Modern Europe and the Ancient World. Those are two pretty big different time periods. But I can tell you that when you take military history classes come up you get questions like who would win a Roman Centurion or a member of the British SAS. So I enjoy the concept of the Games, the gladiator battle between soldiers of every era, because it is like those conversations are coming alive on the page. It cannot be that long before The Accelerators answers the tough question of Ninja vs. Pirate! 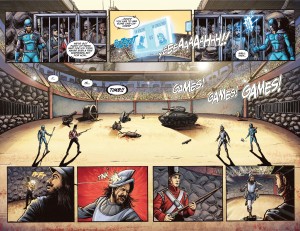 The greatest warriors of history fight in the games!

Dan: This is going to seem weird. I liked the book, but did not love it. So what I did not like is that I was not immediately pulled into the book like I recent was with a title like Astro City which made me quickly want to burn through the entire original series. I have the same reaction with Fables, but with that series the shine did eventually wore off. So I felt about The Accelerators like I did a good but not great issue of Fables. So what I liked least was that I was not in the first issue completely pulled into The Accelerators universe yet.

Mike: I understand! I liked the pacing but somehow, though, it just didn’t all gel for me.

I was really put off by the gore on the cover, and in the first few pages, in the time-travel Thunderdome sequence. Maybe that’s why I found it hard to respond more positively to the balance of the issue which truly isn’t bad. It’s not especially groundbreaking or provocative, but—apart from characters who feel flat, and that’s a big exception—it’s competent storytelling. But the bloodbath at the beginning put me in a foul mood. Maybe that’s my problem, not the comic’s.

Dan: That cover is pretty bloody! I’m not planning to throw it up on the wall in my kids’ rooms. I would like them to sleep. It is safely stored in a short box, where the cover cannot put terror into the hearts of my children. And where you cannot pilfer it man!

Mike: The fact that what is, on its surface, a semi-intriguing time-travel story seems destined to turn into a gladiatorial bloodbath frankly leaves me cold.”

Dan: I’m holding out for Ninjas!

Mike: No. It is too much the first chapter in an ongoing story. Ask me when the collected edition is published (assuming I remember to read it).

If I had to guess, though, I bet Daniel saw something about salvific sacrifice in here somewhere… assuming he could see past his autographed cover, that is. (Just teasing you, Daniel!)

Dan: The first lesson is that God loves me so much that he delivered to me a Walt Flanagan autograph!

Okay, so here is the deal brother, I see salvation messages everywhere. So I push myself to find spiritual lessons, even if unintended!

So go with me here. Now this is one of the most controversial Bible verses ever. And it has been misused a ton. But let’s go to Paul’s words in Ephesians about husbands and wives:

22 Wives, submit to your own husbands, as to the Lord. 23 For the husband is the head of the wife even as Christ is the head of the church, his body, and is himself its Savior. 24 Now as the church submits to Christ, so also wives should submit in everything to their husbands.

25 Husbands, love your wives, as Christ loved the church and gave himself up for her, 26 that he might sanctify her, having cleansed her by the washing of water with the word, 27 so that he might present the church to himself in splendor, without spot or wrinkle or any such thing, that she might be holy and without blemish.[a] 28 In the same way husbands should love their wives as their own bodies. He who loves his wife loves himself. 29 For no one ever hated his own flesh, but nourishes and cherishes it, just as Christ does the church, 30 because we are members of his body (Ephesians 5: 22-30, NIV).

Yeah, I went there. My shorthand for this passage is that husbands and wives need to take care of each other, act like a team and fill each other needs. Open communication is usually the best tool to create that team in a marriage. Again, that is just my shorthand.

What we get in The Accelerators is a story of when husbands and wives fail to take care of each other. I have a feeling that the married Lex and Bertram love each other. And I think that both are making decisions based on only the best of intentions. Yet, their inability to love, respect and most of all communicate (Matt Anderson this is some of the best marriage advice you could ever take into account) has led them to make bad decisions and become opponents. I have a feeling that love, respect and communication would have solved their problems pretty easily. But then we would not have a story would we?

Mike: I might read the collected form from a library, but I wouldn’t pay for it, and I won’t be putting this on my pull list.

Dan: I am considering it. I want to see how this ends, and would typically say I would grab the trade since I did like the story. I tend to limit buying to books I love or have Agent Coulson in them (for example I love Scott Snyder’s Batman run and have only bought one issue from his tenure which you will hear about at a later date). But with this being an independent comic it could be a long time before a trade comes out if ever. And then I have to question if the library will get it. So I am considering looking into a package from the retail source I got this copy from for the next five issues. And you never know they might throw in something extra like they did with this issue!

Maybe in the next package they will certify official friendships with Walt!

The Accelerators has Mike and Dan’s attention. Both are intrigued about the possibilities, but there is concern that an interesting story could turn into a blood bath. And based on first impressions, neither is willing to fully financially commit to following this series…yet!

One comment on “Issues of the Day – The Accelerators”