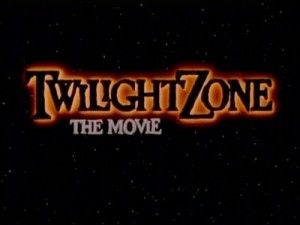 I wanted to see Twilight Zone: The Movie when it premiered thirty years ago this week (June 24). I was eleven years old, and thanks to Saturday night reruns on my local PBS station and Marc Scott Zicree’s episode-by-episode guidebook, The Twilight Zone Companion, I’d become a big fan of Rod Serling’s classic anthology series. I was eager to see how four then-big Hollywood directors—John Landis, Steven Spielberg, Joe Dante and George Miller—would translate that dimension of sight and sound and mind to the silver screen.

But, for a long time, Twilight Zone: The Movie (let’s call it TZTM) felt like forbidden fruit.

For starters, a pall hung over the movie because actor Vic Morrow and child actors Renee Chen and Myca Dinh Le died during the filming of a helicopter stunt gone horribly wrong. Justified moral outrage and protracted lawsuits followed. Of course, no footage of the accident is in the finished film, but each review I read said it was impossible to watch without thinking of the lives, especially the young children’s lives, so senselessly lost. Given these circumstances, what kind of creep would want to see TZTM, let alone hope to enjoy it?

Beyond that stigma, I heard older kids at school talk about how frightening this film was. “It’s so creepy!” “I screamed like crazy!” Their reactions confused me. On TV, Twilight Zone occasionally went for the straight-up shocking, but scary moments didn’t define the show. It was much more about interesting characters in impossible situations. The moments that made you gasp also made you think. But I didn’t hear my schoolmates talking about any big ideas, or even any ironic twists like the ones that had been the TV series’ hallmark. To hear them tell it, TZTM was a fright fest, and I was no fan of horror.

So the movie came and went; time passed; and I didn’t see TZTM until a few years ago. Believe it or not, I still felt some hesitation as I slipped the DVD into the player. What would I think of this film I’d only thought about so long ago?

As an anthology film, TZTM suffers from the lack of a fully formed framing device. Appearances from Dan Aykroyd and snippets of Creedence Clearwater Revival’s “Midnight Special” bookend the film, and narration from the incomparable Burgess Meredith (one of a handful of TV Zone alumni involved in the project) introduces each of its four segments, but it can’t be denied, the movie’s a disjointed one. 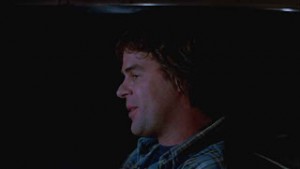 Incidentally, Aykroyd’s first appearance must be one reason those kids talked about this film as though it were more Tales from the Crypt than Twilight Zone. He and Albert Brooks drive down a highway in a scene both genuinely funny (Brooks’ extemporized lyrics to the National Geographic TV theme music—“Look at the two apes, this must be where they live, boom, boom!”—crack me up every time) and, at its end, seriously startling (mostly due to a particularly effective moment of sound mixing).

Arguably the only aspect of TZTM strengthened by its structure is Jerry Goldsmith’s score. Goldsmith showcases his remarkable talent with, in effect, four scores. They range from a sparing use of piano and snare drums; to lush and warm orchestral themes that brim with nostalgia and whimsy; to madcap cartoon music punctuated with sinister “Mickey Mousing” on bicycle horns and ratchets; to pulsing, frenzied strings that stand in the venerable musical tradition of depicting Satan as a fiddler. If you’ve never listened to Goldsmith’s “Twilight Zone Overture” (so called even though it plays over the end credits), you should so you can catch the essence of his masterful achievement.

TZTM’s first hour is its weakest. Any critique of the first segment risks sounding petty and insensitive given its tragic production history, and the story’s final shape was altered by sad necessity. As it stands, the segment presents Vic Morrow playing, not a character, but a lazily drawn caricature: a white, middle-class bigot who spouts racial epithets, sexist remarks, and ethnic conspiracy theories with every breath, like Archie Bunker without a laugh track. What unfolds is a heavy-handed “mile in the other guys’ shoes” morality play that just isn’t interesting. It does deserve some credit for being the only segment of the four not based on an old TV episode. (Truth be told, the TV series presented more than one heavy-handed morality play of its own.)

“Kick the Can,” a 1962 episode about recapturing the magic of childhood in old age, proved irresistible to Steven Spielberg. Just after the success of E.T., he was synonymous with “magic of childhood.” His segment follows the basic outline of the original, but deviates significantly by concluding, in effect if not intent, that all neglected senior citizens in rest homes need are “young minds” (as opposed to actual companionship). The clandestine, midnight game of kick-the-can at the story’s heart becomes, under Spielberg’s direction, an opportunity to teach senior citizens a smug lesson in growing old gracefully. In addition, while veteran performer Scatman Crothers is personally appealing as the meaningfully-monikered Mr. Bloom, his character is an unforgivably blatant example of the “magical Negro” stereotype (which I’ve discussed in this forum before). 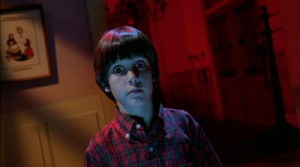 Fortunately, TZTM’s second hour more than makes up for its first. It begins with a suspenseful new take on the 1961 episode in which a young Billy Mumy wishes folk who don’t keep him happy “into the cornfield.” In Joe Dante’s version, Anthony the pre-pubescent terror is a product of the video age, raised on arcade games and “Looney Tunes.” When people dare treat him as anything but the center of their universe, they risk being wished “into cartoon land.”

Dante’s segment boasts many of the movie’s most arresting visuals, especially when the garish grotesques at home in Saturday morning cartoons invade the real world. The actors who play Anthony’s beleaguered, ever-terrified “family”—especially Kevin McCarthy as the hilariously at-wit’s-end Uncle Walt—make the most of their brief screen time. As Anthony, Jeremy Licht never quite musters up a truly menacing presence, but does convey real glee at the pandemonium he creates.

I see this segment as sharp-witted satire of overindulgent parents and other adults afraid to assert their authority over the children in their charge (see especially the sequence in which everyone sits down to eat, at Anthony’s direction, hamburgers slathered with peanut butter). Its final minutes surprise by providing a generally satisfying resolution to Anthony’s story that the original episode lacks. Even for the ultimate “problem child,” it suggests, adults who can find it in themselves to care rather than write the child off as a “monster” may make all the difference. 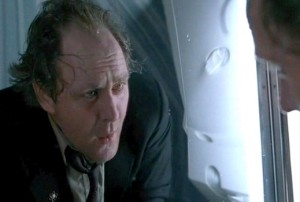 TZTM ends with Geroge Miller’s spectacular interpretation of another of Twilight Zone’s best-remembered half-hours. John Lithgow takes William Shatner’s place as the white-knuckled airline passenger who spies a gremlin on the wing of his plane. Most of the fun in this final segment comes from watching Lithgow sustain an incredible level of intensity throughout. The other fliers’ reactions to Lithgow add to the pleasure. There’s a precocious little girl who wields a Polaroid camera and scolds Lithgow for lighting up a cigarette—how times have changed—and a concerned cameo from Rod Serling’s widow, Carol.

The gremlin is also an incontestable improvement over the original monster. Lithgow witnesses a magnificently realized creature that is not only creepy but also, in a bizarre way, quite lovely. Watching this skeletal, slimy gargoyle soar into a moonlit cloudbank is an elegant moment that feeds the sense of wonder in the midst of an otherwise unrelenting roller coaster of a tale.

Submitted for Your Approval?

If, by some Twilight Zone twist of fate, I could go back in time and tell my eleven-year-old self about this film, I’d tell him, “Don’t worry. This movie’s not as scary as you fear. It’s also not as good as you hope.”  It is still, however, an ambitious and mostly entertaining tribute to Rod Serling’s legacy. 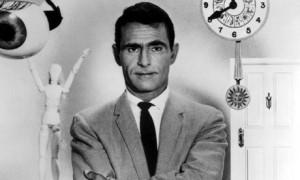 Ultimately, however—with the possible exception of Dante’s segment, as noted above—TZTM doesn’t do what its source material did best. For all that it dwelt on the wonderful and the weird, Twilight Zone, at its best (which was most of its five-year run) was a show about being human. Serling and his team of fellow talented writers—especially Charles Beaumont, Richard Matheson, and George Clayton Johnson—held up a mirror to the audience, week after week. It’s usually a funhouse mirror, and we don’t always like what we see, but the reflection is usually a true one. Not for nothing did the Writers Guild of America recently rank Twilight Zone the third best-written television series of all time. We recognize ourselves, by comparison or contrast, in so many of the Zone’s sundry inhabitants. Their flaws can lead us to confess our own; likewise, their virtues can inspire us to nurture our own. I haven’t done a statistical tally, but my impression is that more of the series’ 156 episodes are about hope than despair, and redemption rather than reprobation.

While Serling advanced no religious (or, to my mind, anti-religious) agenda with his series, I don’t think Christians need to sniff at self-knowledge as one worthy goal of entertainment. Jesus does, after all, enjoin upon us the command to love our neighbor as we love ourselves (Matthew 22.39), and if we do not know ourselves, we cannot love ourselves. John Calvin taught, at the outset of his Institutes of the Christian Religion, that knowledge of self is intimately connected to knowledge of God. He would never assert that we should conflate the two, of course, but he would agree that self-examination has a proper role to play in Christian faith. It’s that kind of healthy self-examination so many Twilight Zone episodes can provoke.

No, TZTM isn’t too scary. But neither is it too helpful. So, Bryan Singer, as you plot your Twilight Zone revival project, take note! It’s not the special effects or twist endings that make the Zone, but the people we meet within its borders. The signpost up ahead must always point the way toward our sometimes surprising and sometimes shocking but always illuminating encounter with ourselves.

Already love or want to know more about “The Twilight Zone”? Mike recommends: