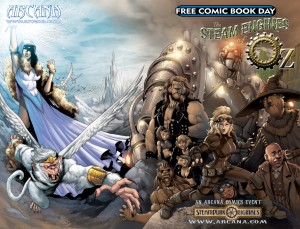 It’s a good year to be an Ozophile. Whether you liked Oz the Great and Powerful or not, you have to admit it’s not every year a major Ozzy motion pictures is in theaters. Oz is also popular on the comics front, as Arcana Comics’ newest offering, The Steam Engines of Oz, demonstrates. In this installment of “Issues of the Day,” Dan and Mike take a look at the premiere, Free Comic Book Day issue, and weigh in on whether this Oz project has what it takes to get them excited about going, once again, over the rainbow… although this rainbow looks a little less bright than usual!

Do you feel this story represents Oz well?

Dan:  I would say yes.  This issue gave a nice glimpse into a bigger story I believe will be exciting.  However, I would argue we are not seeing a lot of Oz but instead seeing a bigger glimpse into the person of Victoria.  But that is more than acceptable since it is clear she will be the heroine that leads us into the world of Oz.

Mike: Thanks to Legend of Oz: The Wicked West, Ben Avery’s Oz/Wonderland Chronicles, and now Arcana’s Steam Engines of Oz, I’ve been having a wonderfully Ozzy year! Dan is absolutely correct: this issue doesn’t spend much time building the series’ unique take on Baum’s famous fairy land, but writers Sean Patrick O’Reilly and Erik Hendrix obviously know what they’re doing, and are setting the stage for what promises to be a rollicking adventure—which, after all, is what the best Oz stories are!

Did this story conform to canon?

Dan:  Since this series is a reimagining of Oz, I give the creators a big pass with canon.  I support them moving the furniture around as long as the story still “feels” Ozzish.  I can easily buy that this story is something that could occur in Baum’s world 100 years after The Wizard of Oz.  The Emerald City is green, there are witches, and the monkeys fly.  Scarecrow and Tin Man are both mentioned, though neither is seen. The cover does show Scarecrow, as well as a hulking big robot figure I assume is probably Tin Man.

Dan: Toto did not make the tale! The biggest variance is the steampunk look.  I do not see myself as a steampunk aficionado but I feel like the stylized look as drawn by Yannis Roumboulias really fit the Oz feel.

Mike: I don’t know much about steampunk as a genre, either, but I expect this series will exemplify that genre. Apparently it’s part of a “Steampunk Originals” series from Arcana. Did you catch the note near the back of the issue that says, “Punk takes a critical stance on society”? I can see how Steam Engines of Oz is going to do just that.

Dan: I am intrigued.  Mr. Digg, are you related to Mr. Oscar Diggs, the Great and Powerful Oz.  Did you lose your “s” over time?

Mike: (smacks self in forehead) How did I not catch that? Good observation, Dan!

Dan: And, seriously, how did the big-hearted Tin Man start a campaign of conquest? I am guessing he believes he is doing the caring thing—at least in his own mind.

Mike:  Could be. As you mentioned earlier, the question of “canon” doesn’t really preoccupy me in this case. O’Reilly and Hendrix clearly know enough about Oz on which to base their own absorbing universe. I can’t wait to find out more. 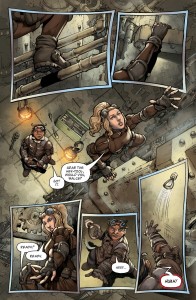 Dan:  I really did enjoy Victoria as a character.  I typically enjoy grey characters, with a little pinch of darkness to them.  Victoria seems nice, caring, hard-working, and someone who you really can become invested in as she tries to complete her given task.  Genuine! The word I am looking for is genuine. And she is all these things without being a sugary sweet character like Glinda the Good Witch, who really does not appeal to me!  And I can support Victoria as a positive role model for a daughter.

Now, Victoria’s job does have greyness to it.  She keeps the steam engines running allowing the bakery’s gears to keep turning, the production lines flowing, and the clocks never stopping.  The Witch does make it clear that though Victoria believes her work only helps people that she has a bigger role in the Tin Man’s conquests than she believes.  The Witch really seemed to focus on the fact that the clocks never stop, and the mystery of why that is important is one I hope will be worth looking into more closely.

Mike: The Witch’s indictment of Victoria’s role in making the machinery, both literal and figurative, of this grey Oz run was, in fact, the aspect I liked most. It seems to shock Victoria into a larger social consciousness, and I think the fallout from that realization is going to drive the series.

I also must give high marks to Roumboulias’ art, particularly in the first few pages where we are getting acclimated to this steampunk Oz. The boilers, the gears, the hex tool—all the details make up a very real, solid-feeling setting. The Witch’s palace of snow and ice is also an impressive locale, evoking some of Kay Nielsen’s illustrations in the early twentieth century. You know, Dan, I don’t usually contribute to Kickstarter projects; but when you steered me toward Steam Engines’ page and I caught a glimpse of Roumboulias’ work, I knew right away I had to chip in something. And I hadn’t even read the issue yet! I simply knew I wanted another beautiful Oz comic on the market.

Mike: Maybe you should designate any Kickstarter giving you do for ninjas!

Dan: Perhaps I had lower expectations due to this being a giveaway book, and the fact that it paid off more than expected, with visually pleasing art and a nice story, has skewed my view! The story does not feel epic yet… Is that really a criticism, though?

Mike: Yes, because one reason it doesn’t feel epic is that Victoria uncritically accepts the mission the Witch gives her. Although I like the social critique angle inherent in the story, Victoria spends little to no time reflecting on her abduction, or on the task the Witch assigns her. I feel that we need, at some point, to get inside Victoria’s head and experience some of what surely must be her confusion about her assumptions regarding the reality of the Tin Man’s Emerald City being turned upside down if the story is going to have any true emotional heft. But it’s just the first issue—let’s give them some time!

Mike: Assuming the series carries through with the social critique, yes, I do. My hunch is that the Witch is going to turn out to be right: the Tin Man is building an unjust Oz on the backs of the poor and vulnerable, like Victoria and her fellow dungeon-dwellers. What’s worse, Victoria initially sees nothing wrong in the status quo. The Witch thus acts a kind of prophetic messenger, awakening Victoria to reality, a reality to which she has unwittingly contributed but which now she can knowingly work to change.

The Hebrew prophets, of course, have a lot to say about societies built on the backs of the marginalized!

Thus says the Lord: For three transgressions of Israel, and for four, I will not revoke the punishment; because they sell the righteous for silver, and the needy for a pair of sandals—they who trample the head of the poor into the dust of the earth, and push the afflicted out of the way… (Amos 2.6-7a, NRSV).

That’s just one example of many. God calls God’s people to oppose this kind of society. We’re joined to Jesus’ own mission of bringing good news to the poor, proclaiming release to the captives, and letting the oppressed go free (Luke 4.18).

What spiritual applications did you see, Dan?

Dan:  Victoria is a gift-giver!  She gives and gives generously of what she has to both her guards and her fellow prisoners.  And you get the sense that all of her gifts are thoughtful and given with a joyful heart.  These are not gifts with strings attached!  How we could all learn from Victoria!

Though it may not always seem like it in this world to be true, Proverbs tells us of the rewards of a cheerful giver:

The generous will themselves be blessed,
for they share their food with the poor (Proverbs 22:9, NIV).

And this issue does show the blessing that Victoria has received for her gifts, friendship and loyalty.  She is about to a start a quest that could lead to a punishment greater than the imprisonment she is already under.  Yet her three fellow prisoners Mr. Digg, Mr. Gromit, and Howard are all willing to take the risk due to the relationship that Victoria has built with them due to their gifts. 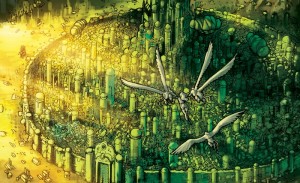 Dan:  So, this is a Free Comic Book Day offering.  And I would say my expectations are generally low for that type of promotional book. But I would also say this issue does its job.  No, the story is not over, but it does serve well as an opening chapter of a bigger story arc.  I want to know where the Scarecrow is and how the Tin Man came to the place where with his big heart he is locking up people. I do not know how I will follow this tale, but—as you pointed out, Mike—I did find a Kickstarter to support an original Steam Engines of Oz graphic novel, and I am considering how I might kick in a few bucks to either get the new trade and the single issues which continue this story.

Mike: I’m telling you, Dan, demand those ninjas! I don’t know that I’ll continue with single issues, but when and if a trade collection becomes available, I want to read it!

We both found The Steam Engines of Oz aesthetically pleasing, entertaining, intriguing, and potentially spiritually applicable. Kudos to the Arcana team for a very promising start to a rich reimagining of the endlessly inspiring Land of Oz!

One comment on “Issues of the Day: “The Steam Engines of Oz” (FCBD Preview Issue)”