In “Remember Me,” Dr. Beverly Crusher, usually so cool and collected under pressure, faces a severe test of her sense of sanity. As she struggles to make sense of the relentless disappearance of Enterprise crewmembers, she clings tenaciously to the scientific method as her best defense against madness. It’s one of Gates McFadden’s best performances. She expertly balances passion, professionalism, and paranoia. I don’t think any other hour of TNG showcases her so well. 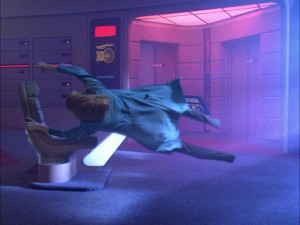 It turns out, of course, that Beverly is really the one who’s vanished, inadvertently sucked up by Wesley’s experiment o’ the week, a weird and wacky warp bubble. Wes and Geordi try to create a way out of the bubble for her. It manifests within Beverly’s rapidly shrinking reality as a wild, violent vortex. It’s her only possible means of escape but, not recognizing it, she resists its pull. She holds on to whatever fixtures are at hand—a medical console in sickbay, the Ops station on the bridge—in order to avoid falling into this maelstrom. Only after she realizes the nature of her predicament can she let go and surrender herself to the swirling storm.

The dimension-manipulating Traveler (Eric Menyuk, reprising his role from “Where No One Has Gone Before”) tells Wes, “Together we may be able to open a gateway for her, but she must choose to walk through it.” He says she must tap “a power within each of us that most people haven’t begun to realize.” Well, we can’t redefine reality with our thoughts, but we do sometimes sell ourselves short. No significant personal growth takes place until we delve into reservoirs of potential we may not have known we had. You can probably think of a time when you were afraid to do something because it seemed as scary as Dr. Crusher’s vortex, only to find yourself, on the other side of the attempt, in a new and better place.

But Beverly’s initial resistance and eventual acceptance of the vortex also leads me to think of people’s frequent response, or lack thereof, to God’s work of moving us to a new and better life. When God intervenes in order to make a way for us out of sin, evil, and death, we sometimes don’t want to take it. God’s “gateways” to life can manifest as wild, violent vortices of chaos and uncertainty. Think of the ancient Israelites, standing on the shores of the Red Sea, unwilling to move forward. Think of some people who wanted to follow Jesus, but couldn’t let go of what made them feel secure, whether homes and family (Luke 9.57-62) or riches (Mark 10.17-22). Jesus calls himself “the gate” through which true safety, true security, life abundant, can be found (John 10.9-10), but we are often unwilling to enter.

Scripture frequently uses “the depths”—foaming, frothing, seemingly fathomless waters—as an image of chaos, a threat to life (e.g., Gen. 1.2; Ps. 69.1-2; Jonah 2.3). The depths can also, however, be the very place God blesses us, if we brave them.

How do you imagine Simon Peter feels, as a devout Jew who doubtless knows his Tanakh, when this radical new rabbi, Jesus, challenges him, “Put out into the deep water and let down your nets for a catch” (Luke 5.4)? We can sense skepticism in Peter’s reply—“we have worked all night long but have caught nothing” (5.5)—but I bet he also speaks with more than a hint of fear. The depths are not to be trifled with; the Bible tells Peter so! But, even if with trepidation, Peter addresses Jesus as “Master,” and because the Master says so, Peter sets sail for the deep, lets down his nets—and is met with a miracle. Chaos and danger dwell in the depths, it’s true. But when we surrender ourselves to Christ’s presence and power, even in those swirling storms, we will find that not even the depths can sweep us beyond God’s reach.

How Big is Your Universe? 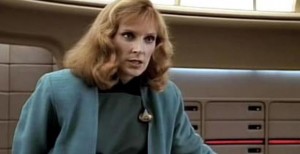 I said earlier “we can’t redefine reality with our thoughts.” Then again, perhaps we can—and not always for the better.

When Beverly asks the computer to define the universe, it informs her, “The universe is a spheroid region seven hundred and five meters in diameter.” This ridiculous cosmology reflects the fact that, at the moment the warp bubble enveloped her, she was contemplating Dr. Dalen Quaice’s regret that he “didn’t take the time to appreciate” the people in his life “while [he] still could.”  Inside the bubble, then, Beverly’s universe collapses to contain fewer and fewer folk.

My favorite scene in this episode is when Crusher incredulously asks Picard—the only other person left in her world at this point—whether he thinks it at all odd that “the two of [them are] roaming about the galaxy in the flagship of the Federation, no crew at all.” Picard smiles a condescending smile and all but shrugs as he says, “We’ve never needed a crew before.” Beverly’s explosive plea that Picard not forget their friends (McFadden’s finest moment in an hour that is full of them) is eloquent and heartbreaking:

Will Riker, your first officer: he’s very good at playing poker, loves to cook, listens to jazz music, plays the trombone… Commander Data, the android who sits at Ops: dreams of being human, never gets the punch line of a joke.. Deanna Troi, you ship’s counselor: half Betazoid, loves chocolate; the arrival of her mother makes you shudder. O’Brien, Geordi, Worf, Wesley–my son! They all have been the living, breathing heart of this crew for over three years. They deserve more than to be shrugged off, brushed aside, just pinched out of existence… They deserve so much more!

Indeed they do, as do the people in your life and mine: our colleagues, neighbors, friends, family—the living, breathing heart of our worlds. The people with whom we share homes, offices, neighborhoods; people whom we don’t know well enough to tick off a list of their attributes, as Beverly can for Wesley and Will Riker and Worf; people we have never met who are still known and cherished by God… no single one of these people deserve to be shrugged off or brushed aside by us. They do deserve so much more.

“Next to the Blessed Sacrament itself,” wrote C.S. Lewis, “your neighbor is the holiest object presented to your senses.” Not all of us Christians share Lewis’ doctrine of the Eucharist, but we have all been told by Christ that our fellow human beings, created in the image of God (Gen. 1.27; 5.1-2), are bearers of his presence—particularly the most vulnerable of society’s members: the poor, hungry, sick, naked, imprisoned; the little children he bid come unto him (Mark 10.13-16); the widows and orphans (James 1.27); “the least of these who are members of my family” (Matt. 25.40). As those whom he has claimed to follow him, we dare not pinch anyone out of our existence, especially those whom society tends to pinch already. We must not quench his Spirit as he expands our personal “universes” to spheres of God’s love extending infinitely farther than seven hundred and five meters in diameter! 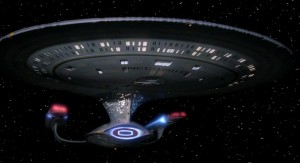 P.S. If you’ve been good enough to have been reading my TNG reflections since last fall, you’ll realize it’s been a while between installments in “The Great TNG@25 Theology Trek!” I have to apologize, and confess that real life has had a pesky habit of getting in the way. I also must admit that, as I made my way further into the series, I wanted to watch more and more of the episodes! As you know, TNG really hit its stride in its later years, in terms not only of really great Star Trek but also of really meaty grist for a theological mill. So, since the series’ twenty-fifth anniversary year has come and gone, I’m asking your indulgence as I “alter the deal” (I know, wrong franchise). “TNG Theology” will be an occasional feature as I work my way through a TNG rewatch, ultimately commenting on more than 25 episodes, but all of which address the big questions with which both Trek and theology are occupied. Thanks for reading, as always!

9 comments on “TNG Theology: “Remember Me””