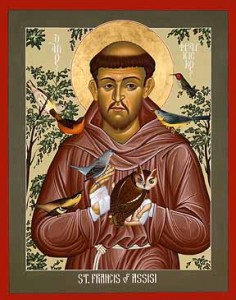 Today, many Christians—especially in the Roman Catholic, Anglo-Episcopalian, and Lutheran traditions, but also others—will remember the Italian friar Francis of Assisi (1181/82-1226).

An itinerant preacher and the founder of monastic orders for men and (with his sister Clare) women, Francis is especially honored as the patron saint of animals. In A People’s History of Christianity (HarperOne, 2009), Diana Butler Bass writes,

Francis is often depicted surrounded by birds and other small animals or, in a famous image, shaking a wolf’s paw… He never crushed worms or ants, and he fed bees wine and honey so they would not die in winter… Bonaventure, a later Franciscan theologian, wrote of Francis, “When he considered the primordial source of all things, he was filled with abundant piety, calling creatures, no matter how small, by the name of brother and sister, because he knew that they had the same source as himself” (pp. 137-38).

The hymn “All Creatures of Our God and King” is based on Francis’ “Canticle of the Sun,” a stirring call for the entire created order—sun and moon, wind and water, and every living thing—to praise God. And it may be heard often today or this weekend, as many congregations, of many denominations, invite their communities to special “Blessing of the Animals” services, not only to give God thanks for the special relationship so many people have with their pets but also to pray for wisdom and compassion as we humans seek to exercise responsible dominion over and stewardship of God’s good earth.

I confess, I’m not a pet person. My family owned a rather neurotic dachshund when I was a boy, and I haven’t wanted a pet since. But I know many pets mean a lot to other people—including, I suspect, more than one sci-fi Christian.

In lieu of our own “Blessing of the Animals,” here are five of my favorite pets from the science fiction genre. I would enjoy watching Saint Francis lay his hands on these in blessing! 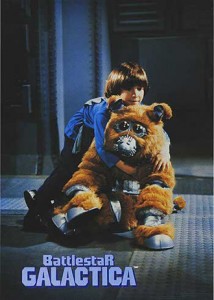 I’ve mentioned “Muffy” the robot dog (excuse me, daggit) as one of the sillier things about the original Battlestar. Apparently Ronald D. Moore agreed, finding nothing about Muffy worth reimagining. A new Boxey was in grim-and-gritty BSG’s first few episodes, but Muffy was M.I.A.

No question, this computerized canine was strictly for kids. But why should adults hold that against it? As I said, I’m not a pet person myself, I’ve seen animals bring out the inner child in plenty of grown-ups. Jesus told his followers they must “receive the kingdom of God as a little child” (Mark 10.15). Maybe we should see kids’ delight in dogs and other animals as a parable of the joy that will permeate God’s renewed creation.

(This potential parable breaks down if we think too hard about the fact that Muffy is, in fact, an artifice, one that Boxey—supposedly broken-hearted over the original, natural Muffit’s death in the Cylon attack on Caprica—is surprisingly eager to accept. Still, a child’s genuine, wholesome joy probably can’t lead us too far from the kingdom!)

Whatever Muffy’s merits, Doctor Who had a robot dog first! Not originally intended to be a recurring character, the Doctor’s funny and fiercely loyal mobile computer quickly proved one of the most popular and iconic Companions ever to board the TARDIS. He has even starred in his own spin-off series!

K-9 is beloved for the same reason so many dogs, fictional and real, win people’s affection: his unshakeable loyalty. When the Krillitanes took over Deffy Vale High School in “School Reunion,” only K-9 could save the day, and he gladly did so, even though it meant he would perish in the process.

Of course, one advantage K-9 has over his fur-and-blood counterparts is that he can be repaired or rebuilt from scratch; I think we’re up to K-9 Mark IV in current Who continuity. But the fact that the Doctor can bring him back doesn’t make K-9’s sacrifices any less valid—there’s never any guarantee the Doctor will! K-9 exemplifies obedience, often better than we humans show obedience to God. I bet K-9 understands better than many people do Jesus’ parable of the servants who refuses a seat at their master’s table, insisting, “We have done only what we ought to have done!” (Luke 17.7-10). That’s why K-9 is exactly what the Tenth Doctor calls him: the ultimate “good dog.” 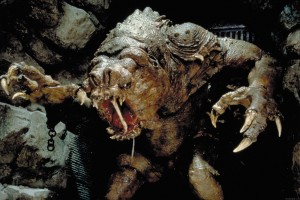 George Lucas hasn’t tampered, yet, with the big bad monster beneath Jabba the Hutt’s palace in any Jedi special edition. The Rancor is perfect as is, slashing and slobbering its way onto the screen in all its Harryhausen-esque stop-motion glory.

The Rancor isn’t Jabba’s pet, though. (I think that position’s filled by Salacious Crumb.) No, it’s the creature’s keeper, named Malakili in the Expanded Universe, who clearly loves this beast. He weeps after Luke defeats the Rancor; and while the scene is intended to elicit laughs, couldn’t it also remind us that most everyone matters to someone? Malakili must feel that Luke, in bringing the pit’s portcullis crashing down on the Rancor’s neck, has brought his whole world crashing down, too. “A right-minded person cares for his beast,” ancient Israel’s sages taught, “but one who is wicked is cruel at heart” (Proverbs 12.10, Revised English Bible). By that standard, Malakili shines like a bright star in the dark, perverse world of Jabba’s court (see Philippians 2.15).

When Spock’s mother Amanda told Dr. McCoy, in the original Star Trek episode “Journey to Babel,” that the stoic, half-Vulcan first officer had a sehlat as a child, something she likened to a “fat teddy bear,” Bones couldn’t contain his amusement. Spock shut him up by informing him, “On Vulcan, the ‘teddy bears’ are alive, and they have six-inch fangs.”

Not until the animated episode “Yesteryear” aired did Trek fans see a sehlat. In order to correct a change in the timeline, Spock must use the Guardian of Forever to return to his childhood and, disguised as fictional cousin Selek, save his own life during a desert ordeal. He succeeds, but the time-space continuum exacts a price: his sehlat I-Chaya, who previously survived the incident unscathed, is poisoned when he leaps between young Spock and a feral le-matya, trying to save the boy. No antidote for le-matya venom exists. Young Spock must decide whether to put off the grievously wounded and suffering I-Chaya’s inevitable death, or let his cherished pet die in peace—a heartbreaking dilemma many real world pet owners have faced. Young Spock tearfully tells I-Chaya goodbye, and gains his first experience in accepting mortality. When older Spock returns to the corrected timeline, he tells Kirk, “One small thing was changed this time. A pet died.” “A pet?” Kirk asks. “Well, that wouldn’t mean much in the course of time.” “It might,” muses Spock, “to some.”

Like K-9, I-Chaya sacrifices himself for his master. His death, however, cannot be undone with a flick of a sonic screwdriver. It is a moment in which Spock learns something Kirk would tell Lieutenant Saavik years later in Star Trek II: “How we deal with death is at least as important as how we deal with life.” Death is, no doubt, “the last enemy to be defeated,” as Paul teaches (1 Cor. 15.26); but, until God places it, finally and fully, under Christ’s feet (15.24), we must somehow make our peace with its inevitability.

I almost left Krypto off this list. It’s  not because he isn’t awesome, because he self-evidently is (just ask Glen Weldon, author of Superman: The Unauthorized Biography). But can Krypto truly be considered a “pet” when he’s a superhero himself? Thanks to Earth’s yellow sun, the canine from Krypton is every bit as “super” as Superman. In fact, according to The Essential Superman Encyclopedia, he’s in some ways better: “Being a dog, Krypto had an enhanced sense of smell and superior hearing to his master.” (Hm… I wonder if here, at last, is a dog who could actually chase and catch his own tail?)

Krypto is one of the most persistent elements of Superman’s Silver Age legacy. Since Crisis on Infinite Earths, DC Comics has tried, several times, to send him to a permanent Doghouse of Solitude, but Krypto refuses to be sidelined for long. Last decade, he even starred in his own TV series (again, one wonders what Muffy thinks):

But for all Krypto’s doggy derring-do, Superman still considers Krypto his pet—but not merely that. So Krypto’s presence on this list reminds us that, while God granted humans dominion “over every living thing that moves upon the earth” (Gen. 1.28), animals do not exist solely, or even principally, for our benefit. They deserve respect and care because they are living creatures—not created in the image of God, but still created—and because, by their very existence, they praise their (and our) Maker. Note how proud God is of the marvelous menagerie he parades before Job: mountain goats, wild oxen, the ostrich, Leviathan, Behemoth… God calls out beast after beast, exulting in each one’s unique glories, for each one glorifies him (see Job 38-42).

What sci-fi pets would you put on your list of favorites? What creatures of our God and King do you gladly call “by the name of brother and sister,” as did Saint Francis?

Unless otherwise noted, all Scripture quotations are from the New Revised Standard Version.