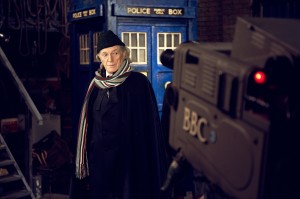 I wouldn’t be surprised if An Adventure in Space and Time prompts some viewers to decide William Hartnell, the first actor to portray the character, is their favorite Doctor. This new docudrama, created as part of the celebration of Doctor Who’s fiftieth anniversary, is not only a deft and engrossing dramatization of the classic series’ beginnings but also a beautiful portrait of an actor who, facing what he thought was the end of his career, unexpectedly found himself at an incredible new beginning.

Not Hartnell alone, of course. Adventure shows us why Doctor Who has no ready counterpart to Gene Roddenberry or George Lucas. Its opening credits include no “Created By” title card. Doctor Who was a group effort, one many people believed in and worked hard to bring to the screen.

Having only been a Who fan since 2010, I’m sure I didn’t catch all the ways Mark Gatiss’ script streamlines Doctor Who’s genesis—although, having recently watched the DVD featurettes for “An Unearthly Child,” I think I caught a few (for example, the TARDIS control room wasn’t designed haphazardly by BBC artists at all, but was outsourced to a model-maker who did an extraordinary job on an extremely tight budget). I also noticed the many details Adventure got absolutely right (the TARDIS control console really was painted light green, to show up as white on monochrome televisions; the Radiophonic Workshop really did create the TARDIS engine sound by scraping a house key across piano wires). 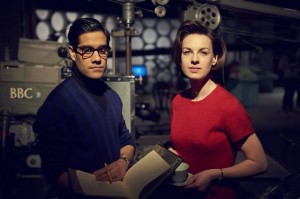 But Gatiss makes the very smart decision to emphasize the pioneering work of producer Verity Lambert (played by Jessica Raine) and director Waris Hussein (Sacha Dhawan). Bringing the BBC’s new Saturday afternoon science fiction serial for children to life was challenge enough; that Lambert was a woman working in a predominantly male business and that Hussein was the BBC’s first Indian director only increased the odds they were up against. Adventure doesn’t dwell on the sexism and racism Lambert and Hussein encounter, but it does depict it, reminding us how far society has come since 1963 thanks to people like these two inventive talents.

Still, Adventure is mostly Hartnell’s story. As played by  David Bradley (whoops!), Hartnell is, before he dons the Doctor’s white wig and Astrakhan hat, a curmudgeonly and short-tempered cynic who’s dismissive of the so-called “success” he’s found playing authority figures in military movies. When Lambert and Hussein approach him about playing the Doctor, Hartnell is hostile toward the idea. As he commits to the part and the project, however, he undergoes an almost Scrooge-like transformation, reconnecting with his passion for his craft (he insists on mapping out the function of every switch and dial on the TARDIS console in order to insure week-to-week consistency, because “the kiddies will notice”) and his inner child—his “twinkle.” I don’t know whether the scene in which Hartnell spontaneously leads a group of adoring schoolchildren through a park “back to the TARDIS” actually happened, but I dearly hope it did! Hartnell enjoys the attention, certainly (as the scene in which he admires his portrait on the first Doctor Who Annual illustrates), but I sensed he truly loved firing young people’s imaginations, even if he didn’t always quite understand how he did so. 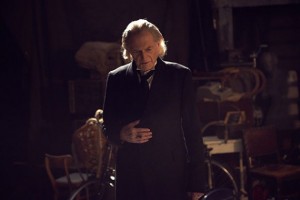 The adulation of British children, however, became a burden Hartnell cannot continue to bear. Several years into Doctor Who’s run, we watch Hartnell, whose poor health and age are catching up with him, running lines with his wife at bedtime, worried sore that he will disappoint his young fans. “They’re depending on me,” he says. Hartnell has reconnected with his own granddaughter, Judy; she tells her classmates, “My sampa is Doctor Who, and he can do anything!” Hearing Hartnell tell her that she “mustn’t expect too much from [her] old grandpa” is only one of many moving moments in the film’s latter half, as Hartnell struggles to cope with the series’ “gobbledygook”-filled scripts and unforgiving production schedule.

It may sound as though Adventure is heading for a sad ending. Wonderfully, it isn’t. It emerges as more than a biopic, as more than a behind-the-scenes story of a TV show, because it reads Hartnell’s experience as a parable. It reminds us, certainly, that nothing lasts forever (even to the point of putting the words of David Tennant’s Doctor in Hartnell’s mouth—“I don’t want to go”— the only “meta” moment that rang a little hollow for me). But even more, it celebrates our God-given capacity for creativity. When we choose to, Adventure says, we can use our talents to bring even the wildest flights of fancy to life, entertaining and enlightening others, and even inspiring them toward creative adventures of their own.

8 comments on “Rapid Review: An Adventure in Space and Time”