Who’d have guessed a timey-wimey meditation on mortality would be so entertaining? 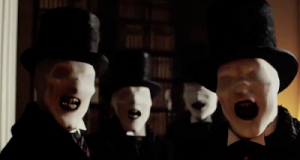 The Whisper Men whispered lots of spooky stuff in this episode, but their most chilling oracle was this: “This man must fall as all men must; the fate of all is always dust.” Time Lords are long-lived, but they’re not immortal. Neither, of course, are we. In fact, contrary to much popular Christian piety, we don’t even have an immortal soul: “It is [God] alone who has immortality and dwells in unapproachable light…” (1 Tim. 6.16). We live as God-breathed unions of body and soul, flesh and spirit (Gen. 2.7), and then we die. “Our years come to an end like a sigh” (Ps. 90.9b), be they “seventy… or perhaps eighty, if we are strong” (90.10)—or even one thousand or more if we’re a Time Lord! As the Doctor tells Clara (in a nice reversal of a similar conversation from “Hide”), “We all [have a grave], somewhere out there in the future, waiting for us.”

We really do die, body and soul—but the good news is God really does give new, resurrection life, body and soul! The late Shirley C. Guthrie, in his Christian Doctrine (revised ed., Westminster/John Knox Press, 1994), writes:

According to scripture, our hope is not in the indestructibility of human beings but in the creative power of God, who can call life into being out of nothing and make the dead live again… Is not hope based on what God in Christ can do, has done, and promises to do a far greater, far more certain hope than hope based on wishful thinking about the immortality of our souls? (p. 380)

I don’t demand the Doctor, as a fictional character, share this Christian hope. But does the way he faces his mortality in this episode offer any insights consistent with Christian faith, or at least unopposed to it?

The last time the Doctor confronted his mortality, in the home stretch of series six (particularly “Closing Time”), he avoided it for as long as possible before ultimately cheating it as “a Doctor in a Doctor’s suit.” This time, without benefit of Teselecta and with his friends’ lives on the line, the Doctor travels to Trenzalore knowing he goes to his grave, “the most dangerous place in the universe.” Why? “I have to save Vastra and Strax,” he tells Clara. “Jenny, too… They cared for me during the dark times… I owe them. I have a duty.”

I catch echoes in the Doctor’s resolve of Jesus’ choice to “set his face to go to Jerusalem” (Luke 9.51), surely the most dangerous space-time coordinates in his universe, “the city that kills the prophets and stones those who are sent to it” (13.34). Jesus knew that his journey to Jerusalem was a journey to his cross, and that knowledge burdened him: “Now my soul is troubled. And what should I say—‘Father, save me from this hour’?” Yet he answered his own question: “No, it is for this reason that I have come to this hour” (John 12.27). As the Doctor has a duty to his friends, so did Jesus have a duty of love, love for his friends—“I do not call you servants any longer… but I have called you friends” (15.15)—and, above all, love for his Father in heaven. Jesus’ love for and trust in God sustained him as he faced death—and defeated it.

We will fall, as all men and women must; our proximate fate is always dust (Gen. 3.19). Because of Jesus’ death and resurrection, however, death is no longer punishment for sin, but release from it, and entrance into new and everlasting life. God doesn’t call us to embrace death (it is still “the last enemy,” 1 Cor. 15.26), but neither need we fear it (see Heb. 2.14-16).

What’s in a Name?

Even with the sure and certain hope of the resurrection, we Christians consider our legacy. It is true that Scripture doesn’t encourage us to worry about “making a name for ourselves.” Such ambition moved God to topple the tower at Babel (see Gen. 11.4), and the Teacher in Ecclesiastes cautions us that mortal renown is fleeting, for “there is no enduring remembrance of the wise or of fools… [but] all is vanity and a chasing after wind” (2.16-17).

Even so, how can we help but wonder whether the world be different because we have lived and, if so, to what extent? When others look back on the track of our time—when we ourselves see it in the Judgment, perhaps as the Doctor, in this episode, sees the “tracks of [his] tears”—will the sight be of “scar tissue” from our journeys through this universe, or paths along which we have, by God’s grace, brought more joy than sorrow, more blessing than curse?

Possibly the loveliest moment in Moffat’s script is the Doctor’s reframing of the episode’s title. “My name,” the Doctor tells Clara, “my real name—that is not the point! The name I chose is the Doctor. The name you choose, it’s like… it’s like a promise you make.” He then identifies John Hurt’s grim and gravelly-voiced character as “the one who broke the promise,” accusing him of having done whatever he did (and I can’t wait to find out) arguably in the name of peace and sanity, “but not in the name of the Doctor!” (Wow—even typing it out now gives me goose bumps!)

I like the idea of a name as a promise. From the perspective of faith, however, we do not choose our name. Our name, our real name, the name of “Christian,” is bestowed upon us from above. It, too, is a promise. It’s first and foremost God’s promise to us. Jesus is God’s Son in a unique and unrepeatable way, but the words God spoke at his baptism, God also speaks to us when we are baptized into him: “You are my son; you are my daughter; with you I am well pleased.”  We are adopted as God’s children in Christ, and God promises to work God’s way with us until Christ is formed in us (see Gal. 4.19; Phil. 1.6).

Second, the name “Christian” is—or ought to be—our promise to the world. It is not meant to be a secret identity! The Savior whose name we bear calls us to let our new identity be known, in word and in deed, so that all “may see [our] good works and give glory to [our] Father in heaven” (Matt. 5.16). We are charged “whatever [we] do… [to] do everything in the name of the Lord Jesus, giving thanks to God the Father through him” (Col. 3.17).

Doctor Who viewers don’t yet know how the actions John Hurt’s character took (will take?) proved faithless to the name of the Doctor. Christians, however, usually know too well when we fail to act in the name of the Lord Jesus. As we wait to see whether we’ll return to the bleak fields of Trenzalore, let’s not wait, by God’s grace and with the Spirit’s aid, to live up to Christ’s name.