The murdering lasts a full year in The Long Halloween. In this classic Batman story, spanning 13 issues, a villain known as the Holiday Killer executes someone once a month, and always on a holiday. Holiday starts his slaying on Halloween, and his seemingly never-ending massacre soon becomes known as the Long Halloween. Batman doesn’t know how to stop this villain because he doesn’t know the identity of the mysterious killer. Readers of the story are also caught up in the mystery, as even we don’t know the true identity of Holiday until the final chapter of the story.

This story takes place in the Batman: Year One continuity, and in many ways it feels like a direct sequel to that Frank Miller story. Instead of Miller, though, the creative team on The Long Halloween is Jeph Loeb and Tim Sale (also known for their work together on such projects as Superman: For All Seasons, Daredevil: Yellow, Spider-Man: Blue, Hulk: Gray, and Batman: Haunted Knight). Loeb and Sale produced two sequel stories to The Long Halloween, Batman: Dark Victory and Catwoman: When in Rome (the stories in these two sequels run parallel to each other).

Along with Batman, the main protagonists in The Long Halloween are Captain James Gordon and District Attorney Harvey Dent. Early in the story, these three make a pact to work together to take down the head of Gotham’s most dangerous crime family, Carmine Falcone. Meanwhile Falcone is having his own troubles warring with the Maroni family. Selina Kyle (Catwoman) is also heavily featured in this story, both in the life of Batman, as well as the life of Bruce Wayne.

Something that sets this story apart from other Batman stories is the type of criminals that Batman is facing. Because this story is set in Batman’s early days, his main villains during The Long Halloween are members of the mafia and crime families. Some members of Batman’s classic rogues gallery (such as The Joker, Scarecrow, Poison Ivy, and The Riddler) do appear in this story, but in many ways The Long Halloween is the bridge in which Batman moves away from organized crime villains and into having enemies that are costumed, super-villains.  Similar to Christopher Nolan’s Batman films, this story helps to create a conversation on escalation.  Does Batman’s mere presence in Gotham lead to an escalation in the type of criminals that attack Gotham? 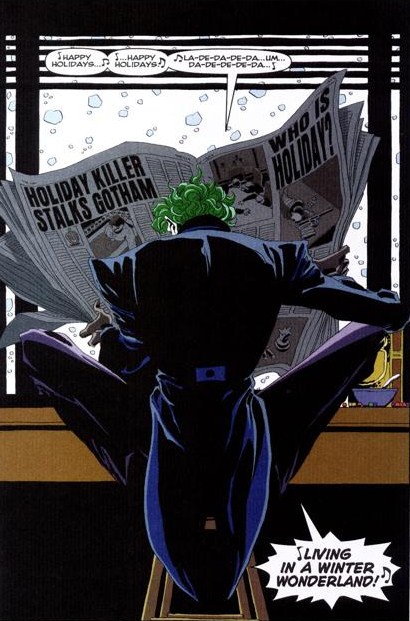 Even though The Long Halloween was originally published between 1996 and 1997, I just recently read it for the first time. I can attest that it definitely stands the test of time as another amazing Batman story. The mystery sucked me in, and it was great seeing Batman using his uncanny detective skills (a skill set that is often ignored by Batman writers). Plus, if you were a fan of Nolan’s Dark Knight Trilogy, the filmmaker has made it known that The Long Halloween was highly influential on his Batman movies. I would definitely recommend this story that has instantly entered my list of Top 5 Favorite Batman Stories.

My final rating: 5 stars out of a possible 5.

For more of my thoughts on The Long Halloween, check out my other podcast, The Comic Book Time Machine, as we recently discussed the story in full.