Note: The following contains some character arc and minor plot spoilers for the first season of True Detective.

In the penultimate episode of True Detective’s first season, our two not-always-heroic heroes Marty (Woody Harrelson) and Rust (Matthew McConaughey) are forced to accept that by failing to adequately follow through on a case from nearly twenty years ago, they left a brutal killer at large. As Rust puts it, “We left something undone.”

At first Marty is reluctant to believe him. The case was deeply disturbing and perverse, and, like any sensible man, the last thing he wants is to get involved in it again. But then Rust pulls out a video tape. On it is conclusive evidence for his claim. He puts it into the VCR so Marty can see it. Before pressing play, he hands him a flask. “You’re going to need this.”

Talk about an understatement.

The tape depicts one of the killer’s violent and depraved acts. Thankfully, we in the audience are largely spared, but we, and Marty, see enough to know that Rust is right: the two detectives did leave something undone. The killer is, indeed still at large.

Marty doesn’t get very far into the tape off when, in a stream of disgusted profanity, he shuts the TV off, unable to watch anymore. After he regains his composure he walks over to Rust. “Did you watch that?” 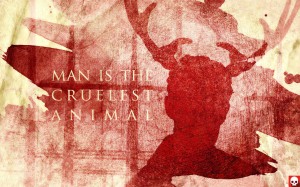 It’s a powerful scene, and one that affected me deeply both times I watched the series however, it’s Rust’s final line that I found most resonating. “I won’t avert my eyes. Not again.” It’s a line that condemns the two of them: in abandoning the case before it was fully done, they did indeed avert their eyes. As a result many innocent lives have been lost. It’s also a line that speaks of an unwavering commitment to responsibility: the darkness is worth plunging into – regardless of its gruesome effects – because in the end, there is no other way for the right thing to be done.

There’s a lesson here that Christians would be wise to pay attention to. Too often in our approach to life and in our entertainment choices we choose to avert our eyes. We often live under the false belief that we must choose between succumbing to and embracing the darkness or choosing to turn a blind eye to it. The first choice seems obviously wrong, so we opt for the latter living lives and exclusively choosing entertainment that is tame, unchallenging and family-friendly.

I would argue, however, that Christianity insists we take a third path – the path Rust chooses to take in True Detective. It’s a path that refuses to either become a part of the darkness or ignore it. Rather it faces it head on and marches forward regardless of the cost.

The Incarnation is the ultimate example of this third path. Our theology demands that when we look at Christ on the Cross, we see him burdened with all the darkness the world has ever had and ever will have. Yet we somehow think that the command to take up our cross and follow him, makes us exempt from a similar encounter with the darkness.

Don’t misunderstand,: I’m not suggesting that culture and entertainment become a free-for-all where we dive in without thought or discernment; that would be the opposite error. I’m also aware – as a father of three young children – that there is a need for quality family-friendly entertainment and an appropriate sheltering from our culture’s more gruesome aspects.

(I would also add that this approach often extends to those who do watch more mature entertainment. How many people watch Game of Thrones for the sex, violence and intrigue without ever once pausing to consider its deeper meditations on power, gender and injustice?)

However, many of us continue in that vein well past childhood. We want a culture where we can live and thrive ignorant of the world’s many problems. We want entertainment that amuses us for an hour or two but never disrupts or disturbs.

I would argue that when we live like that, we have failed to truly take up our cross. We have averted our eyes in the damning way Rust describes.

As the story of Christ’s Incarnation teaches us, true transformation – of ourselves and our world – can only come from following this third path. To borrow a metaphor from the season: it’s no accident that All Saints Day immediately follows Halloween. For as much as we like to tame Halloween into something family-friendly and “nice” the true power of the All Saints Day is never manifested unless that journey through the darkness is first taken.

This lesson of transformation is powerfully portrayed in True Detective’s final moments. Rust is a man deeply scarred by his encounters with the darkness. Yet in the end, he also finds himself transformed by finishing his task and making it to the other side.

In the series’ final scene, he and Marty contemplate the presence of darkness in the world while looking up at the night sky.

“It appears to me the darkness has a lot more territory,” Marty says.

After a moment Rust responds. “You’re looking at it wrong. The sky thing.”

“Well, once there was only dark. If you ask me, the light’s winning.”