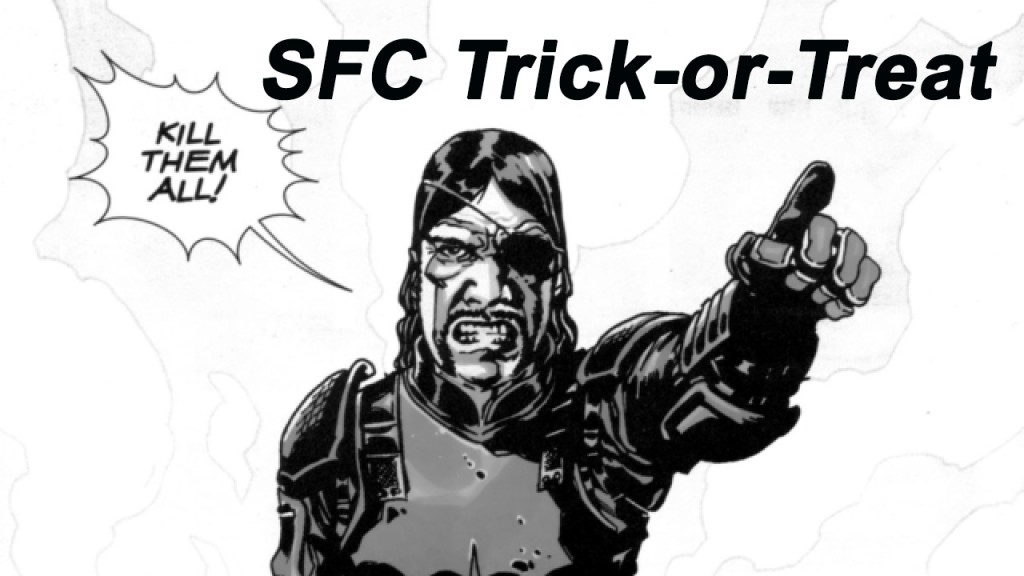 With Halloween quickly approaching and the uncanny popularity of The Walking Dead (both the television show and its comic book predecessor), it’s safe to say that you’ll be seeing plenty of zombies dragging themselves about in search of flesh…er…I mean candy; but, I daresay I think it would be a much more terrifying sight to see someone dressed up as one of the human villains from the franchise.

When lead protagonist, Rick Grimes, wakes up from a coma, he finds himself in an unknown world; a world in which the vast majority of the population have been turned into the grotesque undead; a world in which those who remain are quickly losing hope. As time goes on, Rick and his band of survivors are overwhelmed with the discovery that the zombies really aren’t all that scary. From the betrayal of friends, to the Governor – the sadistic leader of a “safe” and protected town – to a group of cannibals who use scare tactics in picking their prey, it becomes apparent that those who’ve survived are the ones to be feared.

In issue 84 of The Walking Dead comic, Rick speaks to his son, Carl, about this very notion. He explains:

I can’t believe it took me this long to realize this. After so long, being driven from one place to the next…I noticed, it was always people – that was the problem. I can’t believe I’m saying this…but the dead…they’re a manageable threat.

As both iterations of The Walking Dead progress, the concept of the evil within the human heart becomes more prevalent. Not only are there men and women who pose a threat to Rick’s group due to their sickening survival methods, but the very characters we love, the ones we always desire to root for, also struggle to find a balance between right and wrong — making it very difficult at times to read or watch. When life becomes “kill or be killed,” is it really life at all?

Ultimately, The Walking Dead is about much more than physical survival. With the horrors that the characters have to face daily, especially from the living, we learn that the humans are, in fact, The Walking Dead. So, what we as the audience hope for is the survival of the soul. It’s for this reason I offer you this treat for Halloween: The Walking Dead can be extremely bitter, but it can also be very sweet. Take it from it Rick:

One comment on “SFC 2014 Trick-or-Treat: The True Horror of The Walking Dead”