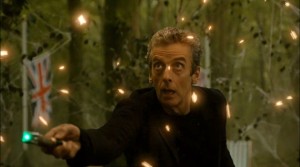 Like the thoughts swarming so quickly around Maebh Arden that she couldn’t slow them down, the ideas in Frank Cottrell Boyce’s first Doctor Who story fly around so fast that I, at least, don’t feel I’ve grabbed hold of most of them. Roger Ebert called Boyce “arguably the most original and versatile screenwriter” in England, so I’m perfectly willing to believe there’s more going on in “In the Forest of the Night” than I appreciate. As things stand, however, it strikes me as series eight’s weakest episode: poorly paced, casually contrived, and cluttered with too many potentially intriguing ideas to give most of them their proper due.

The Doctor and Children

As usual, however, even the weakest hour of Doctor Who is stronger than most hours of television. I liked a lot about this episode, especially the apparent progress the Doctor continues to make toward becoming the proverbial “good man” we know he can be. He can now admit when he’s wrong. He can apologize, sincerely, when he thinks he’s let people down. He quotes Clara’s rebuke of him at the end of “Kill the Moon” verbatim to acknowledge that, yes, he does share our world and count it as his own. He even finally calls Danny “Mr. Pink!”

Best of all, the Twelfth Doctor reveals that he has a soft spot for children. Doubtless he’d deny it, were you to call him on it. He doesn’t seem too pleased to have the Coal Hill kids crowding into his TARDIS’ control room; they don’t even show the proper astonishment that his ship is bigger on the inside! But when he turns the console over to the kids for the climactic “class project” of saving the Earth, he seems proud of and maybe even a little touched by their action. The Doctor still had his grumpy moments this week, but I glimpsed some gentleness underneath. 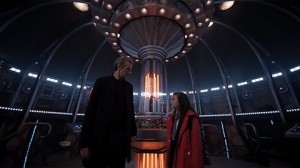 “When a child is speaking,” he tells Clara, “you listen to it.” (Hm, there’s that episode title again…) These are wise words! I’ve never had to struggle with the decision to medicate a child for behavioral reasons, so I don’t fully share the Doctor’s blanket condemnation of doing so (though the overmedication of children is a real crisis). But grown-ups are frequently too quick to shut children up or shut them out, as the Doctor confesses he initially ignored Maebh. I struggle sometimes to pay my children the complete attention they deserve. When I am fully present with them, however—mentally and emotionally, not just physically—I can hear and learn some wonderful things, and am reminded, as Danny says of his pupils, that they are “more amazing than universes.”

When the psalm-singer declared “children are a gift from the LORD” (Psalm 127.3, Common English Bible), he was talking about how parents should view their offspring (and, specifically, their sons). Today, we can affirm the statement in a wider sense: All children are God’s gift to the community, to be not only listened to but supported and loved, for “to such as them… the kingdom of God belongs” (Luke 18.16).

Checking In On Clara

Is Jenna Coleman as frustrated with the increasingly confused characterization of Clara as I am?

When she introduces the Doctor to the children in the “rapidly reforested” Trafalgar Square, she says, “It’s all sorted now.” Has she forgotten “Kill the Moon” already? If any adventure should have squelched such a naïve faith in the Doctor, that one should have. Has she forgotten last week’s “Flatline” already, for that matter? Danny says Clara “springs into action,” but only to accompany and follow the Doctor, not to assume a leading, problem-solving role for herself as she did so recently in Bristol. And, yes, Danny’s attitude toward his students is commendable; however, the way Clara swoons over him for it doesn’t reflect well on her as a teacher, nor does her cynical, even sarcastic, naming of her students as “gifted and talented.”

I did, however, like Clara’s plan to get the Doctor back to the TARDIS and off the planet. And I was intrigued by her claim (again echoing “Listen”), “Furious, fearful, tongue-tied—they’re all superpowers if you use them properly.” Both moments pointed to the mature, wise Clara we saw early in series eight, and again last week. In both moments, Clara demonstrates why she told the Doctor, in “The Caretaker,” that he still has a teacher exactly like her: She’s still teaching him!

“In the Forest of the Night” is no more subtle in its environmental message than Star Trek: The Next Generation’s “Force of Nature” was with its. The Doctor Who episode is certainly more entertaining than the TNG episode. It also stands in a long line of Doctor Who stories addressing environmental issues, especially during the Third Doctor’s tenure. 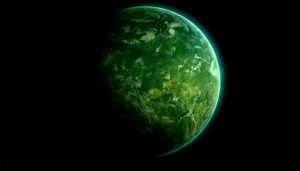 I’ve mentioned before how worried I am about climate change, so I welcome any stories that encourage us to treat nature as our friend and not our foe. I’m glad the kids at Coal Hill are learning sound environmental science, since it seems under attack in some educational quarters these days. I think the image of God’s good, green Earth was an important one for this episode to showcase.

I do wonder whether, for all its good intentions, “In the Forest of the Night” actually reinforces rather than challenges the idea that nature exists to serve us. Sure, the aliens (the “Here”) who create (or take the form of? I was uncertain) the “instant forest” are blanketing the whole planet, “the earth… and all that is in it” (Psalm 24.1). But the episode’s focus remains solely on how the Here’s action saves humanity. (In fact, the only other sequence involving animals—the London Zoo’s escaped wolves and tiger—puts human beings at odds with them.) Knowing the Here have intervened in this way before, in a distant past now preserved only in fairy tales, only strengthens an assumption that it doesn’t really matter what we do or how we act—somehow, we’ll be all right.

Nothing could be further from the truth, of course. I would have liked this episode to end with some acknowledgment that, when it comes to our dependency on and interrelationship with the rest of the natural world, we shouldn’t and mustn’t use our uniquely human “superpower” of forgetting. Our survival depends upon our remembering that our God-given dominion of this planet means ruling it as God rules, nurturing and encouraging life and well-being for all creatures.

Except where noted, Scripture quotations are from the New Revised Standard Version. As always, the positions I state in this essay are mine alone, and do not necessarily reflect those of other writers for The Sci-Fi Christian.