We spend much money, effort, and time in our culture candy-coating the Christmas season with superficially “pretty” things. Colored tree lights, shiny wrapping paper, glitter-covered snowflakes—I think we hope these trappings will distract us from more unpleasant realities that, sadly, don’t take time off during “the holiday season.” 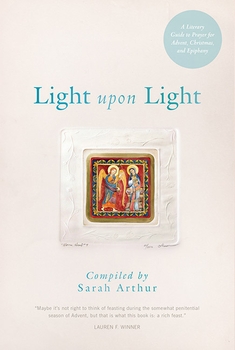 The season does, however, contain real beauty for those with eyes to see and ears to hear. Sarah Arthur is someone who does, as her rich and refreshing compilation of literary texts, Light upon Light, shows. With these carefully cultivated passages from poetry and fiction, arranged to illuminate the biblical texts and themes commonly encountered during the liturgical seasons of Advent, Christmas, and Epiphany, Sarah invites readers “to sit… to breathe in the words of others… [to] seek points of light that cannot be extinguished.”

If you’ve been listening to and reading The Sci-Fi Christian a while, Sarah’s not a stranger to you; she generously provided signed copies of some of her earlier books as prizes for our Tolkien-Lewis Writing Contest last year. Well-versed in both Middle-Earth and Narnia (as well as the works of Jane Austen), Sarah knows we need stories, including tales of other times and other worlds, to feed our “God-hungry imaginations” (the title of her wonderful book on storytelling in youth ministry). She is a strong advocate of engaging fiction and poetry prayerfully who emphasizes that God’s Spirit can speak to and shape us through not only the words of Scripture but also the words of good literature. Like her earlier literary prayer companion, At the Still Point, Light upon Light presents poems and narrative excerpts in a suggested, simple order for prayer and reflection.

Fans of fantastic literature will recognize a few classic names from the genre: Lewis Carroll, George MacDonald, Hans Christian Andersen (a passage from “The Snow Queen” that should send anyone suffering from Frozen fatigue back to that movie’s original, superior source material). Charles Dickens’ Christmas Carol makes an appearance, too, confirming its well-deserved status as a classic.

But it’s the real world, where joys and sorrows jostle against each other for attention and where beauty breaks in only fitfully and unexpectedly, that concerns all the writers represented in these pages, even when they’re engaging it in a fictional mode. A heartbreaking passage from Oscar Hijuelos’ novel Mr. Ives’ Christmas, for example, captures how quickly and cruelly death can intrude upon our well-ordered lives. In contrast, Mary F.C. Pratt’s poem “Stunned Back to Belief While the Mezzo Sang ‘He Shall Feed His Flock’” exemplifies how the most ordinary of moments can, with equal suddenness and force, convey unlooked-for, undeserved holiness.

Unsurprisingly, the biblical Christmas narratives and their characters are common subjects, but they are often treated in surprising and powerful ways. G.K. Chesterton takes us to “The House of Christmas,” “the place where God was homeless/And all men are at home;” while Susanna Childress imagines the Nativity taking place in “Bethlehem, Indiana”—the peacock farm’s caretaker “awakened with a sudden urge/for green bean casserole only to find a heavenly host inside/his refrigerator…” Joan Rae Mills expresses the mystery of the Incarnation in “Mary”: “she holds the One/who has so long held her.” Paul Mariani explores Joseph’s mindset: “How difficult it must have been, standing in, as ever father/must sometimes feel.” In a funny and moving excerpt from John Irving’s novel A Prayer for Owen Meany, an awkward children’s Christmas pageant rehearsal turns, before readers’ eyes, into a fleeting moment of goofy glory.

An accomplished poet herself (she has, fortunately for us, included a few of her own pieces), Sarah Arthur has brought together so many texts that sparkle with piercing turns of phrase, from such a diverse range of writers past and present, it is tempting to quote example after example. Instead, as we enter another Advent next week, I encourage you to discover the wealth of insight and inspiration within Light upon Light for yourself. The words lovingly offered here may help you catch unexpected glimpses of the beauty of the Word made flesh.