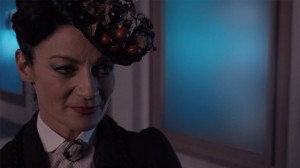 Contrary to my expectations, learning Missy’s identity wasn’t the most interesting thing about “Dark Water.” Sure, I’m curious to know how the Master escaped what appeared to be a self-sacrificial end in a blaze of time-locked glory (in “The End of Time”) and regenerated into her current form. I don’t know that we’ll get an answer. If not, I’ve read enough comic books and seen enough sci-fi sequels to accept that archnemeses have a habit of staging “impossible” comebacks. It must be a clause in the standard villain contract.

Nor was the Cybermen’s return the shocker it could have been, thanks to the BBC’s publicity department. The moment those double doors closed behind the Doctor and Dr. Chang, bringing the 3W Institute’s logo into focus as a pair of Cyber-eyes, should have been another brilliant surprise that Steven Moffat had hidden in plain sight. I wish previews and publicity stills hadn’t robbed the reveal of its potential impact. (There may yet be some obvious secrets, however. Did you catch the name of 3W’s founder—“Dr. Skarosa”? Far too similar to the name of the Dalek homeworld to be a meaningless detail, isn’t it? Especially alongside the Master’s quip, “I’m not a Dalek.” Could Daleks be around the bend?)

The most interesting thing about “Dark Eyes” was its multi-faceted examination of death and the human response to it.

The episode’s first ten minutes, focused on Danny’s sudden, senseless death and Clara’s devastated and desperate response, contain some of the rawest, most emotionally serious and honest scenes in modern Doctor Who. Jenna Coleman perfectly captures a grieving person’s numb amazement at the fact that, when someone we care about dies, the rest of the world keeps right on going about business as usual: “It was boring… ordinary… People just kept walking with their iPhones and their shopping bags.” 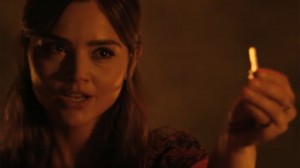 She also convinced me Clara really would threaten the Doctor in the drastic way she planned unless he somehow saved Danny. We saw all the independence and intelligence Clara has shown this season being channeled to a ferocious end. “Time can be rewritten,” she insists, with no patience for talk of paradox loops. It’s a science fictional equivalent of Martha’s heartbroken lament to Jesus, “Lord, if you had been here, my brother would not have died” (John 11.21). When death claims those we love, we sometimes feel as though we’d give anything, do anything, to get them back; and the anger we may feel that God doesn’t return them to us can compound our grief.

Danny’s struggle to accept his own death makes an interesting parallel to Clara’s. Like her, he is wrestling with overpowering emotions: heartbreak at being severed from Clara, fear that she will follow him, and guilt for mistakenly killing a young boy in a heated engagement during his tour of duty as a soldier. Seb offers Danny the chance to “delete” the pain of his regrets and bad memories. We should find out early in the next episode whether he takes it. If he does, the downloading of his consciousness into a Cyberman exoskeleton that follows will be another kind of death. To be alive is, at least for human beings, to feel emotion, painful as well as pleasant. We are able to set painful emotion aside when the circumstances demand it, as the Doctor urges Clara to do throughout this episode. We may, with time, be able to forget our pain (last week, the Doctor called forgetting, for better and for worse, “the human superpower”). We can’t, however, choose to avoid it entirely—not and still be living. Without emotion, we might as well be Cybermen. 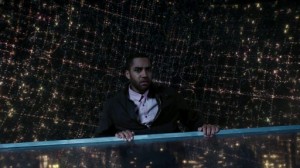 I found it appropriate that “Dark Water” aired on November 1, the date when much of the Christian Church observes All Saints’ Day. It’s a day for reflecting on the same question at the core of the episode: What happens to us when we die? Seb says the Nethersphere is “not really an afterlife—just more life than you were expecting.” He’s lying, of course. The Master clearly tells the Doctor she has been uploading “dying minds,” not dead ones, into her hard drive. The Nethersphere is a cruel trick, designed to deceive people into throwing away what life they have left. It’s designed to make them despair. (And if confronting them with their bad memories and regrets doesn’t make them utterly despondent, surely the bureaucratic setting with its paperwork and instant coffee will!)

Seb’s lie carries a theological component, too. Christians do believe that the “great cloud of witnesses” to God who’ve gone before (Hebrews 12.1) are at peace: The dead who die in the Lord rest from their labors (Revelation 14.13). In the wonderful words of the Bidding Prayer in the annual Christmas Eve Service of Lessons and Carols, they rejoice “upon another shore, and in a greater light, that multitude which no man can number.” They are experiencing “more life than they were expecting.” But it is new life. It isn’t a natural, inevitable continuation of mere existence. It is God’s unnatural gift, the unexpected, unending life of Resurrection, not resuscitation.

“The dead are dead,” says the Doctor. “They don’t come back.” In the natural order of things, he’s right. But in Jesus Christ, God has “destroy[ed] the one who has the power of death, that is, the devil, and free[d] those who all their lives were held in slavery by the fear of death” (Hebrews 2.14-15). And because we know we will live a new and eternal life with him after death, we can take heart and live life to its fullest, feelings and all, today.