I’ve always thought the cosmic coincidence that William Shatner and Leonard Nimoy were born only four days apart—March 22, 1931 and March 26, 1931, respectively—ought to be cause (or excuse) enough for some sort of celebration: certainly among Star Trek fans and, given these men and their characters’ iconic status, possibly among sci-fi fans in general.

With Nimoy’s recent death, I’ve remembered many standout scenes he and Shatner shared onscreen as Spock and Kirk. In honor of their birth week, I’m kicking off a five-day commemoration of some of their most memorable moments together in the franchise that made them both legends.

How could any celebration of Shatner and Nimoy’s joint work on Star Trek start with any other scene? Kirk and Spock’s first shared moments establish much about their relationship. The tri-dimensional chess game (this iconic prop’s first appearance) makes an elegant metaphor for these two men’s contrasting approaches to life.

Spock is cool and rational, to the point of arrogance—a trait Nimoy quickly dialed down once the series proper began, but which never entirely evaporated from Spock’s personality until Star Trek: The Motion Picture. Additionally, his comment about an “ancestor” who married “a human female,” of course, reflects Spock’s still vaguely-defined backstory (no form of the word “Vulcan” would be spoken onscreen until the fourth produced episode). Fannish retcon, however, can interpret the line as Spock’s attempt to suppress the full truth about his human heritage (another facet of his makeup that would not definitively change until The Motion Picture).

For his part, Kirk refuses to be rattled by an opponent in a strategically superior position. He plays on, allowing his intuition to reveal just the right move at just the right moment. He also makes clear his mind is more on the Enterprise’s mission than on the chess game: “We should have intercepted by now. The bridge said they’d call.” While Kirk can allow himself moments of relaxation and pleasure, he never completely loses himself in recreation. As a guest character will say of Kirk in a much later episode (“Bread and Circuses”), “He commands not just a spaceship… but a starship. A very special vessel and crew.” That “very special” burden weighs on Kirk more heavily at some times than others, but he never forgets it—and never regards it, for all its weight, as anything but a privilege. (His attitude toward being a starship captain may offer Christians insights about how to approach our vocation as followers of Jesus!) 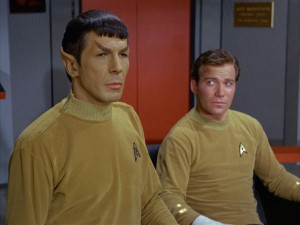 What’s missing in this scene, of course, is any real sense of friendship between Kirk and Spock. Kirk’s closest friend aboard the Enterprise at this point is the ill-fated Gary Mitchell. Even by this episode’s final scene, however, Spock has moved to the captain’s side—where he belongs, as Edith Keeler will say in “The City on the Edge of Forever,” “as if [he’s] always been there and always will.”