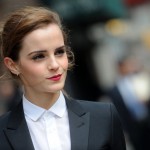 Emma Watson was big news in my neck of the woods this week.

According to The Daily Pennsylvanian, the University of Pennsylvania’s independent student newspaper, the 24-year-old star of the Harry Potter film franchise had chosen Penn as her graduate school. Soon, however, many mere Muggles across the metro Philly area had their hopes of sharing a cheesesteak with Hermione dashed. The “news” was part of The Daily Pennsylvanian’s upcoming annual April Fools issue. It all felt like a “wheeze” worthy of Fred and George Weasley’s magical practical joke shop!

Watson did make real news just two months ago, however, when Disney announced that she would be starring as Belle in its live-action version of Beauty and the Beast. The movie goes before cameras later this year.

Belle may be a Muggle by Hogwarts standards (unless you count true love’s kiss as a magical power). And while Emma Watson is a lovely young woman, Hermione, as J.K. Rowling first described the character, doesn’t share Belle’s impossibly good looks: “She had a bossy sort of voice, lots of bushy brown hair, and rather large front teeth” (Harry Potter and the Sorcerer’s Stone, Chapter 6).

But Belle and Hermione have a lot in common. 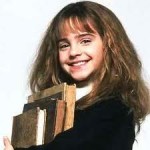 Both are bona fide bibliophiles. They love to read. Hermione would have such a ball in the Beast’s big library, she might be too busy for ballroom dancing. Belle could tear through the collected works of Gilderoy Lockhart in no time (and wouldn’t fall for his phony “Magical Me” malarkey, either). Books feed both of these young women’s intellects and imaginations, inspiring them to see beyond their sleepy little town or the non-wizarding world to wider horizons and greater possibilities. The bookshop is Belle’s favorite place, where she can read “the most wonderful stor[ies] about a beanstalk and an ogre…  Far off places, daring sword fights, magic spells,  a prince in disguise!” Female and male readers of all ages can relate!

Both are devoted daughters. Belle takes her father’s place in the Beast’s castle, giving up her freedom so Maurice can go free. And Hermione makes the heartbreaking choice to erase herself from her parent’s memories so they won’t become targets of Lord Voldemort. (I admit it: I got misty-eyed watching her vanish from her family’s photographs as surely as she vanishes from the minds of her parents in the last Harry Potter) Sacrifice for the sake of someone you love isn’t always easy. Belle’s and Hermione’s ability to make those sacrifices makes them heroes.

Both stand up to the bad guys! Belle repeatedly rejects her unwanted, insufferable suitor Gaston. His refusal to take her “no” for an answer leads to his (literal) downfall. (Maybe Gaston should listen more carefully to this girl and this girl who recently put him in his place at Walt Disney World!) Hermione’s foe is a lot more fearsome—for all his faults, Gaston never became a Dark Lord who split his soul into seven pieces—but she’s a valiant member of Dumbledore’s Army who, during the last battle against the forces of evil, faces foes from werewolf Fenrir Greyback to sadistic witch Bellatrix Lestrange. Hermione and Belle aren’t looking for fights, but won’t run from them when the cause is right.

Not unlike Princess Leia, Hermione Granger has much of the “woman of valor” about her (Proverbs 31.10). Emma Watson brilliantly brought this strong, smart, independent, adventure-seeking character to the big screen. I don’t know how closely the live-action Beauty and the Beast will track its animated counterpart, but I hope Watson will be playing a big-dreaming princess who’d be right at home in the Gryffindor common room alongside our favorite female wizard-in-training.

What do you love about Belle, Hermione, and/or Emma Watson?