In February, Marvel Comics, with much fanfare, announced A-Force, a series starring an all-female team of Avengers. According to co-writer G. Willow Wilson, the series demonstrates Marvel’s renewed commitment “in the last couple of years to telling new stories, to gender diversity, to getting more voices out there…”

I’m in favor of diversity. But noble narrative intentions don’t always make for good stories. Does A-Force deliver on that front?

I say that as a reader with only a casual knowledge of some of these characters, and no knowledge of the current “Secret Wars” event from which A-Force springs. Why is Dr. Doom now God of the Marvel Universe? No idea, but, hey—in superhero comics, these things happen.

I was very pleased to find I could follow A-Force #1 with minimal head-scratching. Wilson and Marguerite Bennett have scripted a fun and straightforward adventure, filled with big action and emotion. Artist Jorge Molina brings the plot to crisp, clean life. A team of super-powered heroes in colorful costumes, protecting their world, caring about each other, fighting for what’s right—A-Force #1 is solid superhero storytelling.

Superheroines Who Look and Act Heroic 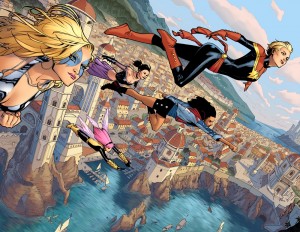 For all Marvel and the media’s hoopla about the all-female Avengers, A-Force treats its heroes first and foremost as heroes, paying them all the respect that name entails. Yes, they’re all women; and, yes, they’re all wearing either impossibly skin-tight spandex or skimpy outfits that show a lot of skin. But Molina does not draw them as though they’ve flown out of the Sports Illustrated Swimsuit Issue (or worse). He draws them as strong and healthy women, not sex objects; very few panels feel like concessions to the male gaze. The book’s focus remains where it should: on what these women are doing, thinking, and feeling. I only make this point because A-Force, in depicting its superheroines so well, shows up how poorly other comic books, dominated by male heroes, depict theirs.

Action and Emotion in Balance

Roughly half the issue follows A-Force as it takes out a monstrous, prehistoric megalodon that threatens the island of Arcadia. Roughly the other half explores the characters’ reactions to the fallout from that fight. Strictly speaking, the team doesn’t defeat it; Ms. America gets rid of it by throwing it beyond the barrier around Arcadia—a violation of Doom’s “sacred precept… clear and inviolate.” For her action, America is exiled. She-Hulk, the baroness of Arcadia, reluctantly enforces America’s sentence; Loki (America’s lover, in this continuity?) and Sister Grimm are left behind to grieve. I don’t know whether the scenes of America’s banishment are intended as overtly “feminine” story beats—I can maybe imagine a male superhero, in a similar situation, tearfully telling someone to “feed the stupid cat” and stop listening to “mopey music” in his absence—but I’d like to think they weren’t written and drawn to show off the characters’ “softer sides.” Real people, male and female, have real feelings about things; why shouldn’t fictional superheroes?

You don’t need a literature degree to figure out that Ms. America—“She’s beauty, she’s grace, she’ll punch you in the face” (great line)—must, to some extent, be as a stand-in for the nation whose name she shares. I claim no revelatory insight here. But the issue does feature many arresting moments as a result:

I assume this issue puts in place the foundation for socio-political commentary on the United States’ current and future identity.

On Board for Issue #2

Wilson has said that the A-Force team will not simply return to status quo once “Secret Wars” ends. I was entertained and intrigued enough by this introduction to decide at least the next issue will be on my pull list. Hype about the all-female Avengers pulled me in, and I don’t mean to minimize the potential significance of an ongoing, all-woman superhero squad from a major publisher. But it’s the high quality of the finished product that matters most about this book, and that has me looking forward to more next month.

What did you think of A-Force?