After a long and distinguished career, filled with roles that endeared him to movie fans and fans of science fiction and fantasy worldwide, Sir Christopher Lee has died, at age 93.

In the 21st century, Lee appeared in two of the biggest genre franchises of all time. In both, he played once-noble heroes who fell from grace: the sorcerer Saruman in director Peter Jackson’s Lord of the Rings and Hobbit trilogies, and Jedi knight-turned-Sith Lord Count Dooku in George Lucas’ Star Wars prequels (as well as The Clone Wars animated theatrical movie, though not the TV series).

Decades earlier, he’d made his mark as yet another sophisticated but sinister aristocrat, playing Dracula in Hammer Horror’s legendary movie series. (He occasionally portrayed Frankenstein’s monster for the studio, too.) He’s also known for his performances as Lord Summerisle in the 1973 horror classic The Wicker Man, and James Bond villain Scaramanga in The Man with the Golden Gun (1974).

In a joint tribute to Lee and his fellow Hammer alum and horror icon Vincent Price (who shared Lee’s May 27 birthdate), blogger Wendy Brydge praised Lee as one of the greatest actors “not only in the horror genre, but in the history of film.” (UPDATE: Wendy published a lovely tribute post today, as well.)

His Favorite Role Is “One You’ve Never Seen”

At the 2002 Brussels Fantasy Film Festival, a fan asked Lee to talk about his favorite role. Despite his numerous turns in flights of fantasy both light and dark, Lee chose his performance as the title role in Jinnah, a 1998 docudrama that has still not received a wide U.S. theatrical release. The film relates the life of Mohammed Ali Jinnah, the founder of modern Pakistan. Lee spoke bluntly about why he believed the film is unknown outside of festival circuits:

Lee believed Western, non-Muslim distributors were afraid to screen the movie. Jinnah, said Lee, was a Muslim leader… who was “not a fundamentalist, not a terrorist… This is the mistake the world makes, most people. There are [100 million or more] Muslims in the world… [and] what is happening now… is not the true Islam.”

In another interview, Lee talked about the sense of responsibility he felt playing Jinnah: “I felt that it was a great honor. I felt a great sense of humility. As a western Christian playing an Asian Muslim, it would have been perfectly understandable for people to have objected, and some did… [But when] people came up to me an expressed their gratitude, and 99.9% did, it gave me a wonderful feeling of satisfaction.”

I know nothing about Lee’s personal faith (although I do know he rocked a heavy metal arrangement of “The Little Drummer Boy,” among other Christmas songs), but I am impressed that he saw no conflict between being a “western Christian” and deeply respecting people of other faiths and cultures. As you saw above, Lee praised Jinnah’s virtues—“a man of great vision, incorruptible, great integrity”—and refused to bear false witness against the vast majority of Muslims, even when many “western Christians” would not.

One of my denomination’s statements of faith reminds Christians, even as we obey Jesus’ commission to “carry the gospel to all” people, that we “must approach all religions with openness and respect,” as God has “repeatedly… used the insight of non-Christians to challenge the church to renewal” (The Confession of 1967). Whatever Christopher Lee may have believed about Jesus, his approach to true Islam reflects not only “openness and respect,” but a practice of Jesus’ commandment to love our neighbors as ourselves. 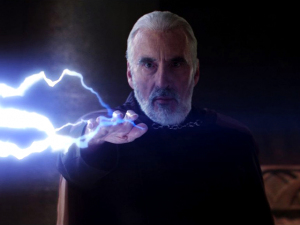 (By the way, although rumors of a fascination with the occult dogged Lee for decades, he flatly denied any belief in dark magic. He even warned students at University College in Dublin against the occult: “You’ll not only lose your mind, you’ll lose your soul.”)

May Christopher (whose name means “Christ-bearer”) rest in peace; and may this open and respectful man, who used his considerable talent to entertain and thrill so many while playing characters of darkness, find God’s light perpetual shining on him.