The last few minutes of “The Best of Both Worlds, Part I” are the most thrilling few minutes of Star Trek I’ve ever seen. These scenes signaled that The Next Generation was science fiction to be reckoned with.

From the moment the freshly assimilated Captain Picard turns and points his Borg eyepiece’s ominous red laser directly at us (accompanied by a mocking, minor key statement of the usually heroic Star Trek fanfare) to the tense close-up on Commander Riker as he gives the command to fire the Enterprise’s super-charged deflector dish in a last-ditch, self-sacrificial bid to stop the Borg, these three minutes perfectly cap forty-five that blend all that is best in Star Trek:

And something new: a cliffhanger ending! Trek hadn’t seen one of those since 1966, but “The Menagerie, Part I,” as good as it is, doesn’t pack the same punch.

Part One richly deserves the tributes it will get this week as it turns 25. But as I watched both parts again, for the umpity-umpth time, the truth hit me:

Part Two is the better episode.

What? Isn’t it an essential tenet of Star Trek fandom that Part One is TNG’s finest hour—possibly the whole franchise’s? Apparently even the late Michael Piller, who scripted both halves, found Part Two a let-down.

I don’t. Yes, it’s true that when people talk about “The Best of Both Worlds,” they talk about stuff from Part One. But the fact that they do proves how well Part Two delivers.

In Part One, TNG attempted its first spectacular vault into greatness, a routine that carried a high degree of difficulty. In Part Two, it stuck the landing.

Part Two Shook Up Trek’s Status Quo. With few exceptions, TNG, like the Original Series, hit its reset button at the end of every episode. One week’s events had no bearing on the next’s. The series took two years to mention Tasha Yar after she died, for goodness’ sake!

But “The Best of Both Worlds, Part II” ends with a bandaged, de-Borgified Picard casting a haunted gaze out his ready room’s window—a clear indication that this adventure counted, in a big way. As Picard’s brother tells him in the very next episode, “This is going to be with you a long time, Jean-Luc… You have to learn to live with it.” Although serialized sci-fi TV was still a few years away, such episodes as the fifth season’s “I, Borg” and the sixth-season ender/seventh-season opener “Descent” would look back to “The Best of Both Worlds.” And Picard was still “learning to live with” his time as Locutus in Star Trek: First Contact. TNG’s creative team knew that, after “The Best of Both Worlds,” neither Picard nor the Trek universe could be kept the same. Wisely, they did not try.

Part Two Solved A Problem In True Trek Fashion. As he wrote Part One, Piller thought he’d be leaving TNG. He relates with relish, in a DVD interview, how he painted the show’s characters into the toughest spot he could, assuming some other writer would have to paint them out. Piller claims he began Part Two with no idea how to clean up his mess.

I don’t buy it. Piller was too smart and creative, and the resolution he wrote proves how well he knew and loved Star Trek. How do our heroes save galactic civilization this time around? Not through superior firepower and Star Wars-style pyrotechnics. The Borg cube self-destructs after Data exploits the Collective’s mental link with Picard to tell it to take a nap!

Part Two Offers Insights Into Vocation. Picard as Locutus has become the iconic face of this adventure (his ashen, cyber-“enhanced” visage graces the packaging of both the Blu-ray “feature cut” and the expanded original soundtrack album). But Will Riker is the story’s star. Over its 90 minutes, he struggles to discern his vocation, his calling—and he succeeds. 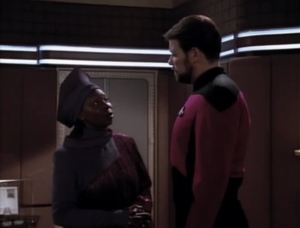 How does he do it? He checks his sense of internal call through intentional conversations with his community: with Picard, Troi, even Shelby, who’s openly after his job. After a key conversation with Guinan in Part Two, he finds the resolve to “throw away the book” and try something new. And, at the end of Part Two, he takes new responsibility for his career’s course. Does his decision to stay aboard the Enterprise (he’ll remain her first officer for a dozen more in-story years) negate his character growth? No. As he says, he now knows he has options.

Riker’s dramatic arc—from anguishing over whether he has grown “too comfortable” on the Enterprise to confidently meeting the challenge of commanding in “some brilliantly unorthodox” ways—is one of the most satisfying in TNG. Frakes deserve credit for a fine performance. Piller deserves credit for pouring his own vocational struggles into the script.

Riker’s vocational wrestling reflect struggles many people face. Are we where we want to be? Are we doing what we’re meant to do? What options are open to us (not everyone’s as privileged as Riker)? Are we making the best use of them? If we’re people of faith, we must also ask whether we’re using our talents and gifts in ways that glorify God and serve our neighbor, as Christ commands us.

These are tough questions. They’re the Big Questions that Spock voices in Star Trek: The Motion Picture:

I don’t know any Bible verses that offer easy answers. But I do believe God wants us to keep asking—and, as we ask, to keep acting. “Whatever you do, in word or deed, do everything in the name of the Lord Jesus, giving thanks to God the Father through him” (Colossians 3:17, NRSV).

Will Riker doesn’t share my Christian faith, but, in “The Best of Both Worlds, Part II,” he models one way of moving ahead even in the midst of vocational uncertainty that I think Christians can admire.

Which part of “The Best of Both Worlds” is your favorite, and why? Let’s talk in the comments!