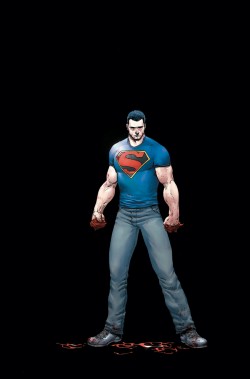 When DC unveiled the cover for Action Comics #41 several months ago, I wondered, “What have they done to Superman now?” Artist Aaron Kuder may have intended his beefy, t-shirted take on the Man of Steel to remind us of the brash young hero who starred in Grant Morrison’s Action run when The New 52 debuted. But I thought this blood-spattered bruiser looked more like a nightclub bouncer who’s just broken up a nasty fight. And was that gore dripping from his knuckles? No, I thought, I had no interest in a brawling, bloody Superman. I’d dropped Superman’s monthly books a few years back, and Action #41 looked like it would give me no incentive to pick them back up.

I changed my mind when I read that the book would be setting the stage for Gene Luen Yang’s upcoming run over on Superman proper, which I’d already decided I did want to read. Maybe, I thought as I added Action #41 to my pull list, it won’t be a complete betrayal of the character.

It’s not. Far from it. Action #41 is, in some ways, a return to the character’s core. Kuder and writer Greg Pak have really given us an adventure of the Golden Age Superman—you know the one who couldn’t fly, but could leap an eighth of a mile—that sports some timely sensibilities.

A “Powerless” Superman Is Still Super

That red stuff covering his knuckles on the cover, the stuff I thought was blood? Turns out those are the remnants of Superman’s cape. For some reason—an editorial box assures me that Yang’s forthcoming Superman #41 will explain (guess “Convergence” left DC’s editorial calendar a little ruffled)—Superman is currently powered down. He’s still stronger than most people (the panel that shows several kids swinging on his arms joyfully makes that point), but he’s nowhere near top form.

He’s also openly known to be Clark Kent. I don’t know the reason behind that development, either, only that, as he mentions, it “wasn’t really [his] call.” And so, dressed in blue jeans and a Superman t-shirt (whose “S” shield sports a black background, as in the old Fleischer cartoons), our hero tackles some challenges the rest of us ordinary mortals face all the time—cold, hunger, shopping for affordable clothes that fit.

He also tackles bullies. The pages that depict his run-in with oafish Joey and his gang convinced me we’re still dealing with Superman, even if he does now ride a motorcycle. Superman’s powers don’t make him super, but how he uses them. Pak and Kuder’s Superman’s motives are at full strength, even if his abilities aren’t. Sure, he takes some pleasure in punching out Joey and his goons, but even Christopher Reeve’s Superman enjoyed giving a “tough guy” a taste of his own medicine. And he does it to stand up for the little guy—literally: he’s defending Joey’s scrawniest hanger-on, a kid who either doesn’t know he’s fallen in with the wrong crowd or who can’t get himself out of it.

Superman also stands up for his neighbors—most of whom have been standing up for him in his absence. They’ve transformed their corner of Metropolis into “Kentville,” expressing pride in the superhero who (until recently) lived among them anonymously, making things better. Not everyone’s on board with having an alien among them—including some of Metropolis’ cops—but, on the whole, Clark’s neighborhood seems to have become a true community thanks to his presence, and they are grateful for that transformation.

This issue’s emphasis on community is a counterweight to Superman’s individual heroics. It reminds readers heroes are all around us–heroes like fire fighter Lee Lambert (does the fact that she has the same “LL” initials as so many of Superman’s loves indicate a romantic relationship with Clark in her future?). And for this sci-fi Christian, Clark’s neighborhood functions as a parable of what the church, at its best, can be: a diverse community of people united around one who is greater than them, but who is “among [them] as one who serves” (Luke 22.27, NRSV). Granted, Jesus emptied himself out of obedience to God (Philippians 2.5-11); Superman has been “emptied” involuntarily. Still, Clark’s neighborhood can be a parable of God’s beloved community, where being brought together around Jesus brings out the best in us.

Clark’s community is also a community under threat—and not only from the monster Superman gets to punch at the issue’s end (whose “first appearance” according to the story’s internal chronology, inexplicably, is in next month’s issue). As the book wraps up, the Metropolis police are getting ready to move in and burn the block. The neighborhood’s decision to stand with Superman appears to have provoked police anger, because, in Superman’s words, “I saved a lot of cops in my day, but sometimes I was the one who put them in danger in the first place.”

This plot development gives this issue a potentially sharp edge. Did Pak and Kuder intend to draw a parallel to the unrest in American cities from Ferguson to Baltimore? The impending violence isn’t racial in nature, but the images can’t help but bring recent headlines to mind. I wonder if this story’s depiction of mistrust between a community and its cops will offer any insight for people who are, like Superman in this issue, trying “to figure out how to make it right.” A comic book can’t offer all the answers, but it might be able to make some contribution, however small, to the ongoing conversation. If it does, that move will be a further example of how “Hard Truth” evokes the Golden Age, when Superman went up against systemic social injustice instead of bug-eyed monsters and criminal masterminds.

I’m glad I stopped judging Action Comics #41 by its cover. Pak and Kuder have kicked off an entertaining and thought-provoking story, and I’m eager for the next installment.

What did you think of Action Comics #41? Let’s talk in the comments!