Greg Pak and Aaron Kuder’s current Action Comics run continues to feel incredibly timely, filled with images of urban unrest, as well as discussions of what values define America, and when they’re worth fighting for. 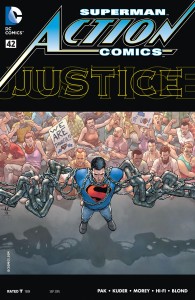 Superman battles a non-sentient monster made of “solidified shadow.” Although he’s “still stronger than most people on the planet,” Superman’s not at full strength. The fight takes a toll. But thanks to what strength he does have, as well as his unflagging desire to protect the city and a well-aimed steel girder and a gas tanker, Superman destroys the creature. He even has a little fun in the process.

There’s no fun to be had in Kentville, the Metropolis neighborhood where Superman was living as Clark Kent, and which residents have now named in his honor to show solidarity with him after his identity was exposed. Fire Chief Lee Lambert is leading her neighbors in a peaceful confrontation with a heavily armed riot squad. Tensions are running high. When a jittery officer accidentally fires a tear gas canister into the crowd, one citizen, a veteran named Dante, hits it back with a baseball bat. Sergeant Binghamton, the zealous, self-righteous Superman opponent in charge of the squad, seizes the moment and orders his men to march. Lambert pleads for Dante to join everyone else in passive resistance, but he will not: “This is America! This is what I fricking fought for! I’m not gonna let them take that away!”

As Dante rushes toward the riot squad, Superman arrives. He strings chains he used in fighting the shadow monster as a barrier between the cops and the crowd. He stands in everyone’s midst, reminding them of how he’s “always fought for everyone in this city.” Peace and reason appear to have carried the day until Binghamton informs Superman he’s “tired of cleaning up after [Superman’s] fights”:

I’m tired of even hearing words like “Braniac” and “Zod” and “Doomsday.” And I’m tired of your word meaning more than ours when we’re the ones who actually bleed and die for this town… We’re going to beat the hell out of you. And you’re going to crack. You’re going to fight back. And then we’re going to roll over every other moron on this street.

That’s exactly what happens. For a while, Superman takes a brutal pounding from a technologically souped-up S.W.A.T. team. As violence against Kentville’s residents and his own anger mount, however, he throws a mighty punch against Binghamton in the book’s last panel. 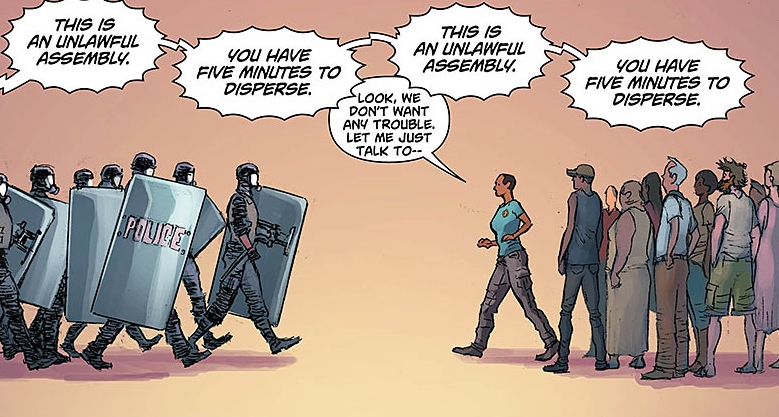 What Would Jesus Do In Kentville?

When, if ever, is violence justified? That’s the question preoccupying Action Comics #42. Lambert and Dante’s argument pits the principle of non-violent resistance against the felt urgency of meeting force with force. Lambert tells Dante, “If you fight, people are gonna die. Our people.” Dante replies, “People are gonna die no matter what.” This ancient debate between idealism and realism allows no easy answers. If the cause of justice—of righting wrongs, of resisting power that devalues and diminishes human life and society—is going to cost lives, are those lives better spent as peaceful martyrs to truth, or as fighters who are battling for good?

Jesus never advocated violence, under any circumstances. Even his angry outburst in the Temple, when he wielded a whip of cords against money changers, was a symbolic, prophetic action; it wasn’t an example for his disciples. His earliest followers preached peaceful behavior, remembering his command against retaliation: “if anyone strikes you on the right cheek, turn the other also” (Matthew 5.39). Jesus practiced what he preached, refusing to call “more than twelve legions of angels” even when his enemies arrested him (Matthew 26.53), setting the stage for his crucifixion.

Were Jesus in Kentville (and he is present in its real-world equivalents), I’m certain he’d be sitting on the ground with Lambert and the others; and I think he’d tell Dante to put down his baseball bat, as he once told Peter to sheathe his sword. But Pak and Kuder don’t choose sides in the debate. They present both characters as fully committed to their courses of action, and create sympathy for both, leaving readers with the uncomfortable but necessary task of thinking through when and why we might meet force with force.

The Super-Suffering Servant Strikes Back

Many commentators (including, on occasion, yours truly) make much of parallels between Jesus and Superman. Action Comics #42 plays with those parallels to a point. In the book’s closing action, Superman is a suffering servant. In one full-page panel, Kuder draws Superman in a cruciform pose as he puts himself between the innocents of Kentville and the riot squad ready to run them down. No fewer than seven smaller, red-tinted panels of an increasingly beaten and bloodied Superman follow shortly, evoking for me Isaiah’s report of the one who crushed and bruised for our sake. And the panel in which Superman, still struggling under the weight of chains, his face spattered with blood, continues to call for calm, is emotionally powerful.

But Superman is not Jesus. He has his limits, and Sergeant Binghamton pushes him to them. The sight of Superman, so long a friend of law enforcement, striking a police officer is startling; however, he has by that point been heavily provoked, and Binghamton is no paragon of policing. Should Superman have been able to resist handing Binghamton the victory he knew Binghamton wanted? Perhaps. But Superman is no berserker; we’re nowhere near Frank Miller Dark Knight territory here. We’re watching a hero sworn to protecting the innocent decide that enough is enough. If, in their next issues, Pak and Kuder portray Superman as punching first and asking questions later, then I’ll reassess their take on our hero. For now, however, I continue to see a 21st–century take on the Golden Age Superman, who wasn’t above swinging a righteous roundhouse or occasionally even threatening the bad guys’ lives when he judged the circumstances demanded it.

I do wonder whether the moments in which Superman finds unexpected pleasure in inflicting pain—against Joey and his gang in the last issue; against the shadow monster in this one—are hints of something darker for the character to come. Even so, Pak and Kuder’s strong focus on Superman’s moral center so far leaves me confident that they’ll bring him through whatever darkness may be ahead back into the light he inspires so many of us to strive toward.

What did you think of Action Comics #42?