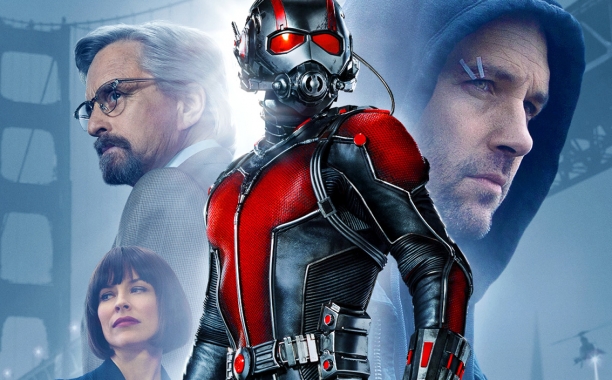 It seems right that Ant-Man managed to win the box office this weekend with the smallest per-screen average gross—“only” $15,051—of any Marvel Cinematic Universe movie to debut at number one. After all, the movie is a celebration of a “little guy” loser who winds up a winner not by seeking the limelight, but by literally shrinking from it!

I enjoyed Ant-Man. Paul Rudd is engaging throughout as Scott Lang, an ex-con with the heart of Robin Hood whom Dr. Hank Pym (Michael Douglas), the first Ant-Man, recruits to wear his miniaturized mantle. Comic book fans often herald Batman as the classic “everyman” superhero, but I’d have to give Ant-Man the nod over the Dark Knight. Scott Lang could be almost anyone: an ordinary guy (apart from his post-grad work in computer science, at least) trying to live his life and do the right thing, who’s made both good and bad choices along the way. Rudd does some of his best work as Scott before any superheroics start. Early scenes in which he’s adapting to life “on the outside”—a cheap apartment he shares with ex-cellmate Luis (Michael Peña) and Luis’ friends; a job he can’t stand, really needs, and rapidly loses (remember, kids: “Baskin-Robbins always finds out”)—are some of the movie’s most entertaining.

Visually, Ant-Man doesn’t “wow” the way other MCU movies do. That fact, too, is less a flaw and more an extension of the story’s theme. No doubt, all the scenes in which Scott shrinks to insect scale are impressive technical achievements; they have to be, to sell audiences on the premise. But no sights made my sense of wonder sit up and take notice (excepting Scott’s brief sojourn in the quantum realm near the movie’s end). Instead, I was reminded of the “Honey, I Shrunk the Kids” playground at Disney’s Hollywood Studios theme park. Ant-Man isn’t out to make your eyes pop in astonishment; it just wants you to have some fun. Wouldn’t it be cool, it asks, if you could ride an ant the way cowboys ride horses? You’ll find yourself thinking, It sure would be!

I didn’t like everything about Ant-Man. Its middle third is an extended heist caper that runs too long, and Corey Stoll plays bad guy Darren “Yellowjacket” Cross too broadly. (Frankly, Stoll, with shaven head, reminded me too strongly of Michael Rosenbaum, whose outstanding work as Lex Luthor for all those seasons on Smallville set a high bar for nuanced villainy Stoll doesn’t begin to approach here.) So when a friend asked me today if I wanted to see the movie again while it was in theaters, I found myself passing. It’s a fun ride, but not two full-priced tickets’ worth of fun.

Consider Ant-Man’s Ways And Be Wise

Even so, don’t mistake Ant-Man’s relative slightness for complete lack of substance. I appreciated its emphasis on working together to accomplish a goal. Like its heavier hitting MCU cousins The Avengers and Guardians of the Galaxy, or like Arrow and The Flash from DC’s nascent TV universe, Ant-Man highlights a team. Scott depends on others for success. Dr. Pym trains Scott in his ant suit’s capabilities. Hope Pym (Evangeline Lilly) trains him in hand-to-hand—and hand-to-face—combat. Scott’s roommates also end up playing pivotal roles. Although Dr. Pym tells Scott, “Ants can do a lot, but they need a leader,” the sages of ancient Israel observed how ants prepare for the winter “without having any chief or officer or ruler” (Proverbs 6.7-8). Our society and our world could stand a stronger sense of what we can accomplish together, so I’m glad to see superhero stories like Ant-Man lifting up the importance of teamwork and community.

(I was disappointed the non-white members of Ant-Man’s team are extremely thin characters, if not outright ethnic stereotypes. On the other hand, Falcon from the Avengers has a substantial cameo, and ends up recruiting Scott to join the “big leagues.” Here’s hoping future MCU movies mirror the comic books’ current commitment to diversity and character depth.)

The way Scott studied and learned to control various types of ants reminded me of Owen (Chris Pratt) and his relationship to the raptors of Jurassic World. At the micro and macro levels, these movies point to our capacity for cooperation with nature. True, Scott is ultimately making the ants do what he wants; however, he does so taking into account each type of ant’s unique properties and natural abilities. As we rethink our relationships to the rest of God’s creatures in light of ecosystems we’ve upset and species we’ve driven to the brink of extinction, heroes like Ant-Man and Owen may help model a more responsible way of exercising “dominion over the fish of the sea, and over the birds of the air, and over the cattle, and over all the wild animals of the earth, and over every creeping thing that creeps upon the earth” (Genesis 1.26).

Finally, the fact that, in Ant-Man, the fate of the world is decided in a battle on a Thomas the Tank Engine train set strikes me as a great reminder that the real action isn’t always where we human beings think it is! Scripture relates, again and again, how God’s purposes aren’t always being worked out in high-profile, oversized ways. Jesus said God’s reign is like a tiny mustard seed growing into a huge tree, or a little bit of yeast leavening an abundance of bread (Matthew 13.31-33). I know that, when I pray for God’s kingdom to come, I’m usually hoping for its spectacular eruption into the world. But God doesn’t always promise show-stopping miracles. God also, and perhaps usually, works on the margins—and maybe even in miniature—and, if we’re willing, through ordinary people like you, and me, and Scott Lang.

What did you think of Ant-Man?