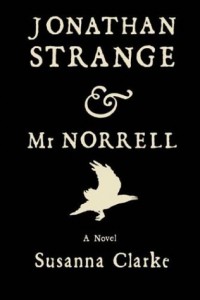 Jonathan Strange & Mr. Norrell is an unexpected addition to my summer reading list.

I know I am late to this  party. I noticed Susanna Clarke’s novel on bookstore shelves (remember those?) when it was first published in 2004—at over 800 pages, in a stark and striking black-and-white dust jacket, how could you not? I found its premise intriguing: magicians in turn-of-the-19th-century England, seeking supernatural power to win the Napoleonic Wars.

But the book’s “alternate history” angle discouraged me from reading it. (I often worry I won’t remember enough real history to appreciate an author’s imaginative twists.) Not even its bestselling status or the awards it won—the Hugo, World Fantasy, Locus, and Mythopoeic Awards, among others—made me give in and pick up a copy. It’s so darn long, and set in a small font—and with footnotes, some of which run across the lower margins of many pages! And so, for more than a decade, Jonathan Strange & Mr. Norrell languished on my list of “books to read on the proverbial ‘someday.’”

Gen-Xer that I am, I changed my mind thanks to television. I saw the trailer for BBC America’s miniseries adaptation of the book, and it instantly enchanted me.

The question asked in that trailer—“Why is no more magic done in England?”—resonated with me. Like many other science fiction and fantasy fans, I find my sense of wonder easily stoked! I want to see magic. I want startling new perspectives and flashes of transcendence. I want to find myself in the land of “Faërie,” as Tolkien described it—that other realm, just outside our own, where all is seen in the new light of hope and joy, “Joy beyond the walls of the world.”

The first episode of the series (the only one I’ve watched so far—I’m late to that party, too) introduces Mr. John Segundus (played by Edward Hogg), who voices this heartfelt longing for enchantment: “Why [do] the great feats of magic that I read about remain in the pages of my books, and are not seen on the street, or on the battlefield?”

Hear, hear! Segundus’ lament reminds me of the psalm-singer’s:

But the singer of Psalm 22 is in dire distress. I hear him hitting those personal pronouns with force: “They trusted, and you rescued them”—the subtext being, “Why aren’t you rescuing me now?” Where, God, are your mighty deeds as of old? Are they only ever going to remain in the pages of our books, even if that book is the Bible? Or will we see them on the street, on the battlefields, in our homes, in our workplaces, in our churches?

Faith in God is not belief in magic. But God’s actions can seem more than magical when they happen. “When the Lord restored the fortunes of Zion,” declare the psalm-singers, “we were like those who dream” (Psalm 126.1). When God acts, God enchants the world, and we who are in it. 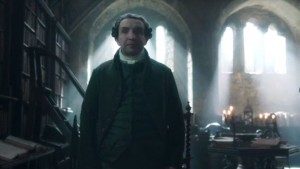 I’m fewer than a hundred pages in to Jonathan Strange & Mr. Norrell, but I now know why Clarke invested so much energy in those footnotes of imaginative scholarship. An entirely fictional but fully realized tradition of English magic undergirds her alternate history—centuries of lesser and greater wonder-workers, magicians both noble and not-so, fairy-servants and spell-casters who revealed and reveled in the rich magic that once soaked the world as much as rain soaked England. While not a Christian book, I think the novel can encourage Christians to hold on to our view of the world as a realm fundamentally and forever “enchanted” by God when God entered it in Jesus of Nazareth. That decisive divine action gives us grounds to keep seeking and celebrating “great feats of magic”—glimpses of God’s redemptive power, on the loose and at work.

Usually, like Elisha’s servant, we need our eyes opened to see the miraculous around us (2 Kings 6.17). We need help, and the one place above all we should expect to receive such help is the church.

Unfortunately, the analogue (intentional or not) of the church at the outset of Jonathan Strange & Mr. Norrell does not inspire much hope! The members of the York Society of Magicians know a lot about magic—a narrator tells us they read each other “long, dull papers” about it—but they don’t actually practice it.

They were gentleman magicians, which is to say they had never harmed anyone by magic—nor ever done anyone the slightest good… Not one of these magicians had ever cast the smallest spell, nor by magic caused one leaf to tremble upon a tree, made one mote of dust alter its course, or changed a single hair upon anyone’s head.

In both the book’s first chapter and the miniseries’ first episode, the Society’s fellows ridicule Segundus for his attempts to do magic. “Practical magic, sir,” Mr. Foxcastle (Martyn Ellis) informs him, “is not a thing for the gentlemen of this society.”

As I watched these “magical gentlemen” laugh at the idea of making magic happen, I thought of the apostle James’ admonition to early Christians: “But be doers of the word, and not merely hearers who deceive themselves” (James 1.22). We Christians claim to know a lot about God’s power, which is, at its core, God’s love in action. We must always ask ourselves how well we are practicing it.

How often do our neighbors see Christ’s church as nothing more than an association of like-minded, “respectable” people who may never harm anyone—but who also don’t do anyone the slightest good?

How often do we settle for “long, dull papers” about God’s power (let the preachers beware!) instead of experiences of God’s power flowing through us to change our own and other people’s lives for the better? 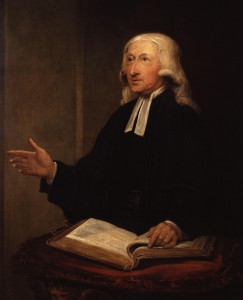 John Wesley, the founder of the Methodist Church (who died in 1791, just 15 years before Jonathan Strange & Mr. Norrell takes place), had no patience for Christians who remained content with a private, overly intellectualized faith. He stressed the importance of translating faith into action—what Wesley called “practical divinity.” I think Wesley would have empathized with Mr. Segundus. Thank God for “Segunduses” in the church today—people who refuse to quench the Spirit, who push God’s people to live up to their baptismal identity, who still believe that God’s power “at work within us is able to accomplish abundantly far more than all we can ask or imagine” (Ephesians 3.20).

Not far into the story, the York Society disbands. Once they encounter a genuine “practical magician,” their “gentleman magician” model cannot stand. Here again, the church can learn a lesson. How often have we seen people of other faiths, and people who profess no faith, acting more like Christians than we do? As an old saying goes, we can’t be so heavenly minded that we’re of no earthly good!

A Story To Savor

I will not be tearing through either the written or the televised versions of Jonathan Strange & Mr. Norrell. Real life is doing its pesky thing of getting in the way. But that’s all right. I can already tell that this story is a story to be savored—to be ruminated on, the way practitioners of lectio divina “ruminate” on a text from Scripture. I don’t claim Clarke’s novel is divinely inspired (although all creative impulses spring from the Creator), but I do think “chewing” it slowly may help me glimpse more of God’s “magic” of redemptive power and love in this world, and inspire me to practice it more in my life and for those around me.

Have you read or are you watching Jonathan Strange & Mr. Norrell? Let’s talk about what you think of it in the comments below!