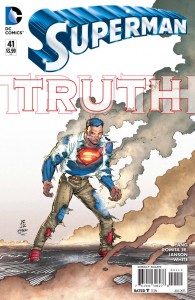 The champion of the oppressed faces a threat to his identity as Gene Yang takes the helm of Superman.

“Before Truth” (Part One)

Gene Luen Yang is the reason I’m reading Superman monthlies again. As I mentioned in my review of Action Comics #41 earlier this month, I’ve been anticipating Yang’s takeover of the writing reins since DC announced it. Yang’s multiple award-winning 2006 graphic novel American Born Chinese blew me away. It blended geek culture, Chinese history and legend, Western stereotypes of “Orientals,” comedy, and even a subtle undercurrent of Christian faith to explore themes of isolation and identity from which everyone can learn. And his more recent project, Boxers & Saints (2013), masterfully captures the complexity of war and of Western Christendom’s early encounters with China through two different but connected stories of individuals caught up in the Boxer Rebellion.

Yang is a creative and compelling storyteller. His original work is so rich in meaning and emotion, I wondered—and even worried—whether a Superman comic might be beneath him.

Yang apparently doesn’t think so! With Superman #41, he’s launching a story that promises to address themes familiar from his earlier work—emotional crises, social injustice, the conflicts of public and private faces—with intelligence, flashes of genuine humor, and plenty of superheroic action.

An anonymous source texts Clark, claiming to know who’s been supplying the gangs of Metropolis with high-tech weapons. Clark and Jimmy follow the lead and discover the weapon provider’s secret base. Clark, as Superman, busts up the operation, figuratively and literally. 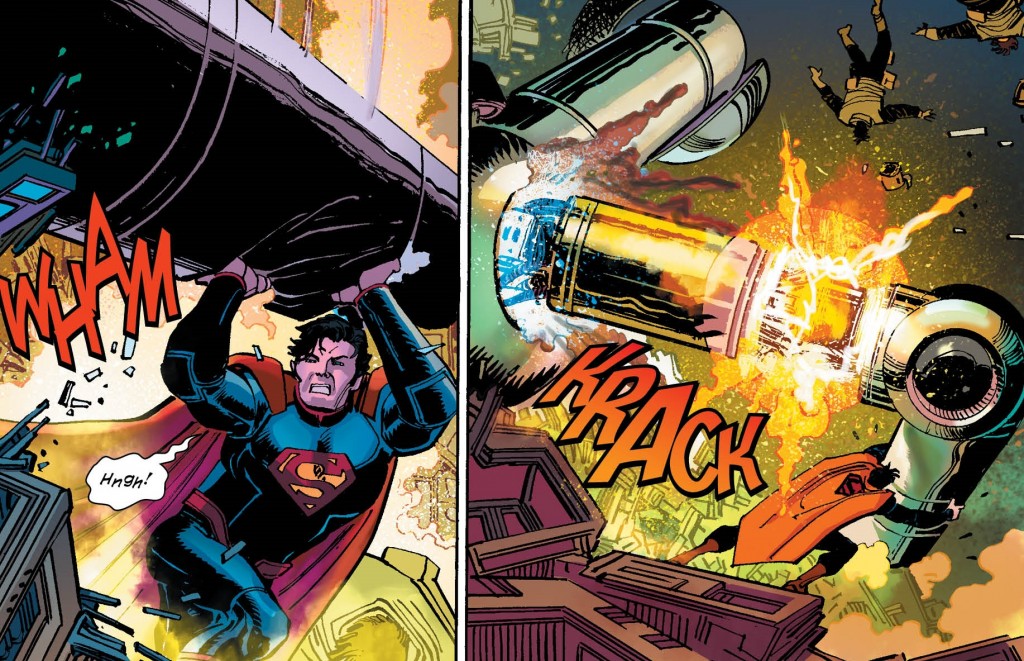 Back at the Daily Planet, Lois sees Jimmy’s photos of the ringleader and identifies him as state senator Leland Norvell. While Perry White and his staff celebrate the front-page story that ends Norvell’s career, Clark’s unknown informant texts him again. This time, the tipster proves that she or he knows Clark’s secret identity, and threatens to reveal it unless Clark does exactly as instructed. One Ada Amorgujeta (she calls herself Condesa) comes to the Planet with information about the “bigger,” “uglier” truth behind Norvell; Clark’s source wants him to turn her over to the (supposed) FBI agents who arrive soon after. To preserve his secret and protect Ada/Condesa, Clark—disguised not in his red-and-blue supersuit but in Jimmy’s all-black, ninja-like “covert outfit”—attacks the “FBI” car as it whisks her away. He rescues her, but is shot in the process—and starts bleeding.

Way back in 1938, Action Comics #1 heralded Superman as the “champion of the oppressed, the physical marvel who has sworn to devote his existence to helping those in need!” Seventy-seven years later, Yang avoids such breathless prose in his Superman #41 script, but it’s clear he sees Superman in that light, too. He writes Clark as a gutsy reporter who’ll set aside personal plans to investigate a potentially game-changing anonymous tip, even though (as Jimmy and Lois both tell him) “those almost never work out.” In true form, Superman acts to uncover corruption and put an end to it. What Perry White says about the Planet staff’s choice of journalism could as easily be said about Superman’s choice of heroism: “This is why we all got into the business in the first place!”

Yang’s Superman is the gun-crunching, giant robot-ripping, hard-punching man of action who never fails to channel his power for good. In the issue’s single best panel, Superman is soaring away from the rubble of Norvell’s lair, Jimmy tucked under one arm, one of Norvell’s thugs under the other.  “A minute ago,” the crook says, “I was trying to shoot you in the f-face! Why are you s-saving me?” Jimmy explains, “He’s Superman, dummy.” It’s just that simple. That the Man of Steel can, in that moment, be for the bad guy even as he’s against him—that he can, in well-worn Christian parlance, “hate the sin but love the sinner”—remains one of his most heroic traits.

But Superman #41 also showcases our hero’s vulnerability. Not only physical vulnerability: I’m unsure why he is “bleeding out” at issue’s end, since he seems to possess all his powers throughout the rest of the issue (including his recently acquired “solar flare” ability, which really looks nasty when he’s vomiting flame—not sure I’m a fan).

No, the issue explores Clark’s emotional vulnerability. I felt Clark’s anxiety about his super-secret in a new way. His startled and stunned reaction to the sight of a “fan page” that depicts his transformation to and from Superman (iconic shirt-rip and all), ready to be published to the Web at a moment’s notice, invites the reader to share his panic. 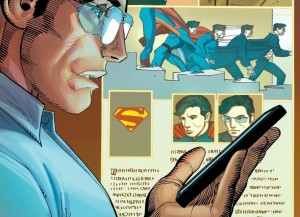 Don’t misunderstand: It’s a controlled panic—even as Clark demands to know whether Jimmy has let his knowledge of Clark’s secret slip, he doesn’t become belligerent; he asks, he does not accuse—but it’s still panic. It doesn’t diminish the character; it makes him feel real.

In Superman #41, Clark, not by his own choice, stands at a crossroads. While there is no fundamental contradiction between who he is as Clark and who he is as Superman, the anonymous tipster suggests that there is, and that Clark must do anything to avoid it. How this issue’s internal chronology relates to that of Action #41 is unclear to me; after all, in that issue, everyone, not just Jimmy Olsen, knows Clark is Superman, and most people are happy about it.

But considered on its own, Superman #41 is a lesson in the potentially poisonous nature of social media when their users rely on the “anonymous intimacy” they make possible. If such cyberbullying can rattle even the Man of Steel, what hope is there for us ordinary mortals? The apostle James’ admonition to tame the tongue (James 3) seems more relevant than ever in the Internet age. What we say online, as much as if not more so than in real life, can cause the foundations of other people’s identities to shake. We must speak to build others up, not to tear them down.

Yang knows his Superman stuff. The anonymous tipster’s self-identification as “a friend” must be an ironic nod to the way Christopher Reeve’s Superman introduced himself to Margot Kidder’s Lois Lane. And Lois’ disbelief that Jimmy and Clark let Norvell’s fake mustache fool them is an amusing comment on how Clark’s glasses have long fooled her. Yang knows and respects this character, and I think his taken on Superman will prove as interesting, entertaining, and thought-provoking as the rest of his work has been.

What did you think of Superman #41?