Who is the apprentice of this episode’s title?

Is it Bors—poor, Dalek-ified Bors—as one might think from the highly amusing prequel episode “The Doctor’s Meditation”?

Is it Clara, as the Doctor’s current companion?

Regardless of who the apprentice is, the real magician is Steven Moffat, and this episode is his latest illusion. 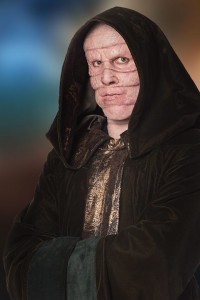 That’s a compliment. “The Magician’s Apprentice” is a fantastic spectacle packed with all kinds of fun smoke and mirrors. Colony Sarff in particular, the “snake nest in a dress,” is an amazing creation; watching the sections of his face slither in two different directions at once was so creepy-cool I could hardly stand it.

(And how did the creative team get him to glide the way he does? Is Jami Reid-Quarrell riding a Segway under that costume?)

The effects are startling, the patter is first-class, the misdirection is masterful—but, as with all magic tricks, there’s no “there” there. The apparent heart of this story—the Doctor’s abandonment of the young Davros, and that action’s consequences—is, I guess, being reserved for next week’s episode. This week’s seems like filler.

So bravo, Steven Moffat! You fooled me, and I had fun being fooled. But I’m hoping you have more than tricks up your sleeve this year. I’m holding out hope you’ve got substance, too.

Why Is Clara More Competent Than UNIT?

I like Clara, but I don’t understand why she’s suddenly smarter and more capable than the world’s top, super-secret intelligence task force. In this episode, Clara

Is Clara’s über-competency a residual effect of her time as “the Impossible Girl,” or sloppy exposition? I’m hoping for the latter. Clara is more interesting as a person than a paragon. 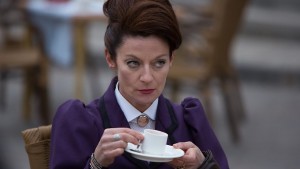 Michelle Gomez shines again as the Master. I would have liked a little more explanation than the handwave we got regarding her “death” last season, and maybe we’ll still get one. On the whole though, I just enjoyed watching Missy wreak her inimitable brand of havoc. Her capricious killing of two security guards near the episode’s beginning and her offer to help the Daleks use the TARDIS at its end make her one of the best baddies on TV. Boo and hiss that “wicked stepmother,” indeed!

Missy’s behavior in the episode’s middle third, however, made her seem like a replacement for River Song.  Granted, the Doctor and the Master’s relationship is complicated (on that topic, Emily Asher-Perrin’s analysis of the characters’ history is required reading). But her concern for the Doctor, her cooperation with his companion, her appeal to the Doctor’s sense of identity, her willingness to be captured with him—all this behavior seems more suited to River. The Master’s even using vortex manipulators now! (I bet those “cheap and dirty time travel” devices allowed Missy and Clara to survive their “exterminations.”) Three cheers to the show for bringing Missy back—but let Missy be Missy!

Will The Doctor Really Withhold Compassion?

Yes, I gasped with fannish delight when the young boy in the field of hand mines (loved those) told the Doctor his name. But this moment doesn’t stand up to too much scrutiny. The Doctor is a time traveler. If he had ever really wanted to destroy Davros—or any of the other enemies and threats to life and peace he’s defeated over his two thousand years—he could have done so at any time. But we know that’s not how the Doctor operates. I thought, after the events of series eight, he knew it, too.

Peter Capaldi plays emotionally tortured, shameful second-guessing to perfection, but Moffat may be drinking from that well one too many times. “The Magician’s Apprentice” leans too much on “Genesis of the Daleks,” even going so far as to incorporate footage from Tom Baker’s classic “Have I the right?” speech. We all needs opportunities to reaffirm who we are and what we stand for, but we’ve seen the Doctor do this time after time in the new series—for that matter, we’ve seen him do it in the series nine trailer: “I’m the Doctor, and I save people!” His current crisis of conscience feels contrived.

My guess? We only think we see what we’re seeing in this episode’s closing moments. Instead of exterminating Davros, maybe the Doctor is exterminating the hand mines, or the past version of himself that failed to help, or some other possibility I can’t imagine. That would be a magic trick that matters.

The episode’s most authentic moment is Clara’s unhesitating decision to stand with the Doctor as Colony Sarff binds him for transport. Missy does, too, but her motives remain unclear to me. I do believe Clara is acting out of unalloyed friendship.

“Some friends play at friendship,” ancient Israel’s sages taught, “but a true friend sticks closer than one’s nearest kin” (Proverbs 18.24, NRSV). Clara remains loyal to the Doctor without knowing what he has done to feel the shame he feels, and without knowing what awaits him or her. She knows only that he’s in pain, and that he’s her friend.

Clara can be a parable of the kind of friend we have in Jesus. In fact, Jesus went farther. He endured the shame and suffering we brought on ourselves in our place.

What did you think of “The Magician’s Apprentice”? Let’s talk in the comments below!

One comment on “TARDIS Talk: “The Magician’s Apprentice” (Series 9.1) (SPOILERS)”