“The Witch’s Familiar” foregoes the epic set pieces and over-the-top theatrics of last week’s “The Magician’s Apprentice” in favor of a clean, compelling plot full of gripping, character-driven drama.

This hour of Doctor Who is so satisfying on so many levels, it’s hard to imagine how the rest of series nine can match it. 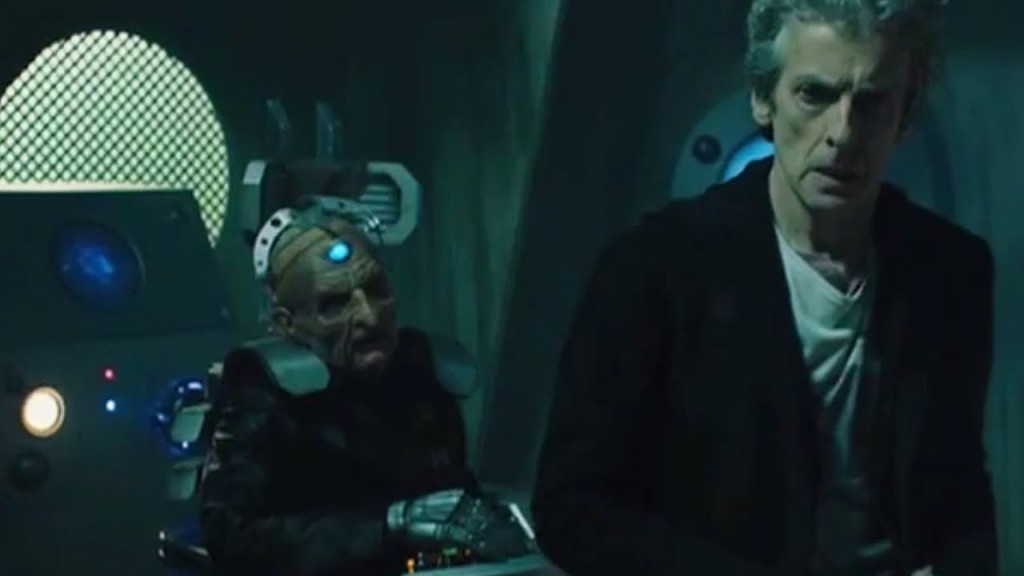 Parable of the “Good” Gallifreyan

One thing that excites me most about “The Witch’s Familiar” is its categorical assertion that the Doctor is compassionate. When Davros says shame brought the Doctor to Skaro, the Doctor denies it: “I came because you’re sick and you asked.”

What a great moment! The angst-filled soul-searching of series eight is behind us (for now). Last year, the Doctor rejected empathy at so many turns—remember when he said about Clara, “She cares so I don’t have to?” The Doctor may still have doubts about whether he’s “a good man” (how shrewd of Davros to ask that question about himself in the Doctor’s hearing), but he is clear on his commitment to compassion. When Davros warns him it will kill him in the end, the Doctor says he’d have things no other way.

People talk about one of Jesus’ most famous parables as the story of the “Good Samaritan,” but Jesus never describes the Samaritan that way. He does describe him as compassionate. When the Samaritan saw the beaten and bloodied man left for dead on the Jerusalem-Jericho road, “he was moved to pity” (Luke 10.33).

Now, the wounded man didn’t try to trick the Samaritan, as Davros tries to trick the Doctor! And I guess the fact that the Doctor is setting his own trap for Davros and the Daleks complicates the compassion he shows his enemy. (“Your sewers are revolting,” indeed—great line!) Still, I’d like to think that had Davros decided, at any point, to really be on the same side as the Doctor, the Doctor would have welcomed him to it.

The Doctor’s decision to go back in time and show mercy to young Davros isn’t surprising, but it is the perfect way for this story to end. We can never know, in advance, the consequences of our compassion. The Doctor’s rescue of young Davros planted a seed of mercy that only bloomed much later (or earlier—“timey-wimey” and all that). In this story, the Doctor knew what effect his act of mercy would have (did have). We don’t, but we are still responsible for obeying Jesus’ command to go forth and show mercy and compassion as the Samaritan did, mirroring the mercy of our Father in heaven (Matthew 5.44-45).

Missy asks Clara, “Why does the Doctor always survive?” She knows Clara’s first response—“Because he’s clever”—is only part of the answer. Pressed to think harder (one of my favorite recurring motifs on Doctor Who), Clara realizes the whole truth: “He always assumes he’s going to win.”

As practical advice for living, the Doctor’s default assumption has a lot going for it. What’s the alternative? Assuming you’re going to lose? Resigning yourself to death, or the proverbial “fates worse than” that fill so much science fiction?

The Christian tradition calls that kind of resignation despair—the assumption that one is beyond all hope, even the hope of God’s saving grace. It’s pride in disguise. It’s saying to God, “I’m so lost, I’m so messed up, I’m so worthless, that not even your arm, O God—your arm that stretched the starry heavens, and that brought your enslaved people out of Egypt, and that stretched out on the wood of Christ’s Cross—is strong enough to save me.”

Despair is also an abdication of our God-given responsibility to live. I’ve quoted The Confession of 1967, one of my denomination’s authoritative statements of faith, in this forum before, but I’ll quote it again: “Life is a gift to be received with gratitude and a task to be pursued with courage.” Fear is natural, but failing to live because of fear is sinful. God calls us to meet life’s challenges, not to run from them.

Those challenges do sometimes defeat us. The Doctor may always get the best of invisible android assassins (and vampire monkeys—“but that’s another story”), but we don’t always prevail against our foes. As the prophet Isaiah told the exiles in Babylon, “Young men may grow weary and faint, even the fittest may stumble and fall” (40.30). Human bravery, strength, resourcefulness, ingenuity—these are all God’s good gifts God, but they’ll only get us so far.

Unlike the Doctor, we can’t assume we’ll always win. We must try, but we can’t take victory for granted. The Bible tells us so. Experience tells us so. Even Jesus tells us so–but he also tells us something else. “In the world,” he says, “you will have suffering. But take heart! I have conquered the world” (John 16.33).

To paraphrase the Fifth Doctor’s exhortation to his companion Tegan (and, on one occasion, the Eleventh Doctor’s to Clara), “Brave heart, people of God!” Or to borrow this episode’s imagery, sharpen your pointy stick and get started! Draw bravery from Jesus, whose Resurrection reveals that God has already won the victory, for us and all creation.

What did you think of “The Witch’s Familiar”? Let’s talk in the comments below!