At the risk of my geek cred losing some hit points, I confess I still haven’t read Ernest Cline’s acclaimed debut novel, Ready Player One (which, like another book on my must-read-ASAP list, is coming soon to a theater near me). But because I’ve heard so many people praise that book, I snapped up this one as soon as I saw it at my local Barnes & Noble.

Armada is a lot of fun to read—frankly, more fun that it should be. Its plot is too familiar, too predictable. Zack Lightman, our hero, is a fatherless high school senior with no post-graduation prospects, yearning to exchange his humdrum life for a destiny-defining adventure. Playing “Armada”—a massive multiplayer online space combat simulation game—is one of Zack’s few means of escape; he’s one of the top-ranked “pilots” in the game’s “Earth Defense Alliance.” Zack also spends time poring over the notebooks his dad left behind. In these journals, Zack’s father believed he’d connected the dots of a vast global conspiracy involving video games, sci-fi movies and TV shows, and the U.S. military.

Zack’s summons to greatness comes when the Earth Defense Alliance reveals itself as real, and recruits him. It turns out Zack’s dad was on to something: “Armada” is a covert program for training a fleet of crack drone pilots tasked with fending off an impending alien invasion. Zack ends up at a secret base on the far side of the Moon where he and his fellow gamers must (in his words) “wage a desperate battle to prevent the destruction of Earth and save the human race from total annihilation.”

I’ll grant the former. The novel’s a love letter to two decades’ worth of geek and gaming culture. It’s filled with references to Close Encounters of the Third Kind and E.T., Space Invaders and Asteroids, Flash Gordon (the one with the Queen song) and Superman II, and a laundry list of other sci-fi properties. Mostly, though, it’s a mashup of The Last Starfighter and Ender’s Game, with generous dollops of the original Star Wars.

Cline clearly had a good time seeing how many meta-moments he could pack into a few hundred pages. Some allusions are subtle; most aren’t. Cline often goes out of his way to make sure readers realize when he’s nodding to pop culture, no matter how awkward the resulting prose (e.g., “She glanced down at her El Riesgo Siempre Vive tattoo, clearly impressed that I knew its origin”).

Cline lets other stories do the heavy lifting of selling his. There’s no “brilliant subversion” going on here. There aren’t even any characters who feel fully fleshed out or unique, and Cline’s handling of ostensibly emotional scenes is clunky and mawkish.

But—Cline seems interested only in entertaining, and I was entertained. Lots of the stuff Cline loves, I love, too. So how can I spend too much time complaining? I’d be like that teacher in Up the Down Staircase who responds to a student’s heartfelt crush note by correcting its grammatical mistakes. In Armada, Cline is calling all fellow nerds to come and play for a while, and I was happy to. 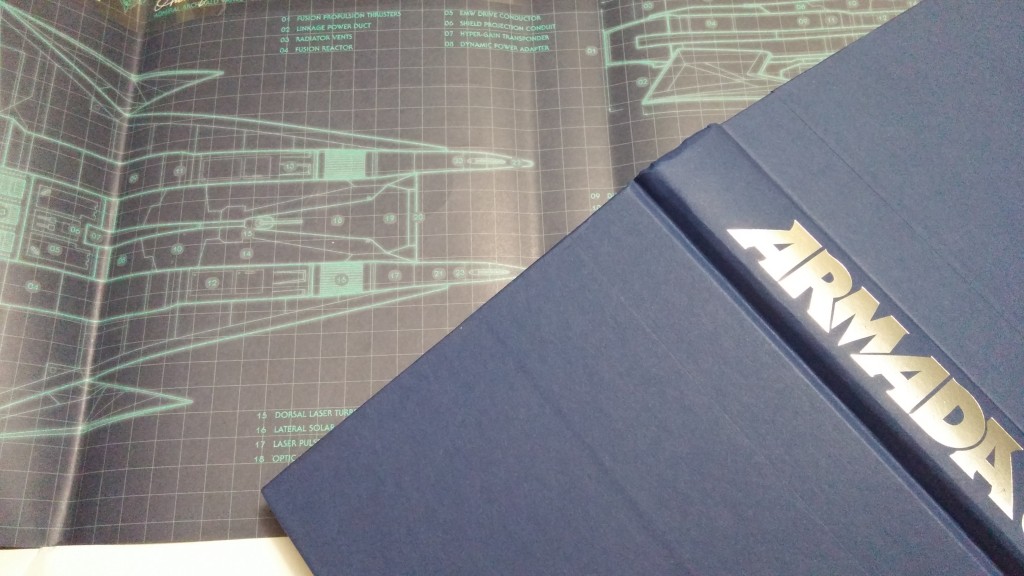 Spaceship schematics on the verso of Armada‘s dust jacket

Like Admiral Kirk at the start of Star Trek III (it is fun to drop references), I feel uneasy about Armada, and I wonder why.

Armada seems to subscribe to the same thesis we here at The Sci-Fi Christian do: that stories matter. In this novel, all of science fiction’s biggest stories matter because the world’s powers that be have used them to “prep” humanity—to get us used to the idea of alien life, to galvanize us into action when our future is on the line.

I’d like to think science fiction could do that. Such slogans as “the literature of ideas” and “prophecy, not prediction” suggest that this genre, in some unique way, has power to help people envision future possibilities, inspiring them to work to make the best ones a reality and keep the worst ones from coming to pass.

But as I read Armada, I found myself scoffing at its suggestion that the stories and games we geeks love can do that. Each day’s headlines offer apparently abundant evidence that, when confronted with imminent threats—from religious extremism to income inequality to climate change—we either do the wrong things, or nothing at all.

None of that is Cline’s fault, of course. But his final few pages do more than (apparently) set up a sequel. They expose a cynicism I find distasteful. Even after humanity has prevailed—even after characters have risen to extreme challenges and made costly sacrifices for the sake of the future—paranoia and pessimism find a way to cast their pall over the conclusion. The book’s epilogue, to borrow language from my denomination’s Book of Common Worship, doesn’t trust good news to be good.

Of course, that motif, too, is familiar in science fiction. And it’s likely familiar to Christians. “Do not put your trust in princes,” the psalm-singer admonishes, “in mortals, in whom there is no help” (Psalm 146.3). Through the prophet Jeremiah, God rebuked leaders who cry “Peace, peace” “when there is no peace” (Jeremiah 6.14). Jesus, of all people, asked someone, “Why do you call me good? No one is good but God alone” (Mark 10.18). Our faith encourages a healthy skepticism of human potential and achievement. It repeatedly teaches us that God alone deserves our ultimate confidence.

So maybe Armada unsettled me because what seems to be a superficial romp through sci-fi and gaming’s greatest hits is really a reminder that those stories matter—but only so much. I don’t know Cline’s religious commitments, if any; but Armada is still causing me to question, weeks after I’ve finished it, whether I’m putting too much stock in stories of starfighters and space invaders, and not enough in The Story to which, at their best, they can point.

Maybe, as Zack discovers in that bracing epilogue, it’s time for me “to keep my mind on where I [am], and what I [am] doing.” Yes, he’s quoting Yoda… but maybe the quote is a corrective for me, at this moment in life.

I’m half-tempted to re-read Armada, to see if it’s deeper than I initially gave it credit for. But I suspect Cline would be just as happy if I move on and read—and do—something else next.

What did you think of Armada? Let’s talk in the comments below!