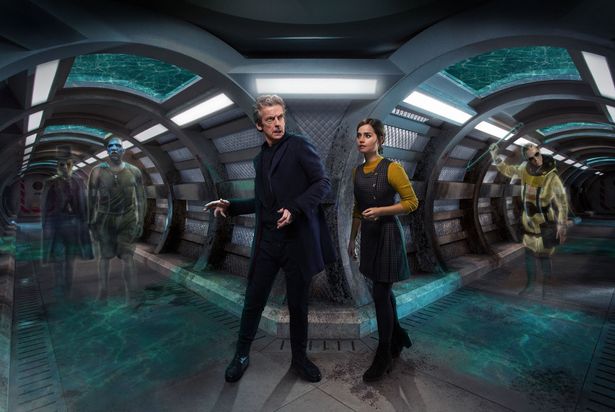 “Under the Lake” unapologetically stakes its claim in Doctor Who’s expansive territory of “base under siege” stories. It even ups the ante with a base, The Drum, that’s also under water and, by hour’s end, under quarantine!

But Toby Whithouse (who last brought Who “A Town Called Mercy” in 2012) manages to make some time-worn tropes feel not just fresh but downright thrilling, with help from Daniel O’Hara’s first-rate direction, Richard Stoddard’s spooky cinematography, and deft performances from an excellent supporting cast:

As in such new Who stories as “The Satan Pit” (2006) and “The Waters of Mars” (2009), the immediate introduction of new characters who feel like real individuals hooks audiences. These characters’ emotional reactions make the situation, as far-fetched as it is, seem real and urgent, and leave viewers wondering, “What in the world would I do?”

The Doctor and Clara seemed a little “off” this week. Clara is back in full-fledged adventure and adrenaline junkie mode, and doesn’t so much as flinch when the Doctor suggests she find herself another relationship—“You lot, you’re bananas about relationships!” It’s a surprisingly casual attitude toward the late Danny Pink, for both Clara and the Doctor. 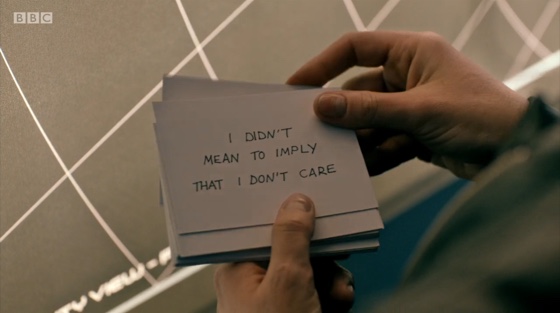 And while Peter Capaldi’s Doctor doesn’t always handle emotional situations well, I have some trouble believing the empathetic Doctor we saw last week now needs flash cards to get him through such moments. (Even so, the scene made me laugh a lot!) Does empathy come easily for the Twelfth Doctor only where non-humans are concerned?

Those few quibbles aside, I found “Under the Lake” a strong and solid thriller, with a predictable but still edge-of-the-sofa cliffhanger. The Doctor is dead? Again?! And he’s a ghost?!? (My money is on that unopened suspended animation chamber as the key to his inevitable survival—what say you?)

In Praise of Cass

I admire Cass. Her courage, problem-solving abilities, devotion to duty, and loyalty to her crew all inspire confidence.

Judging from Andy Palmer’s interview with her, Sophie Stone, who plays Cass, is every bit as strong as her character. Stone sums up her strategy for succeeding as an actor who is deaf:

Aspiring is the first step to becoming what you want to be. Honing your craft is the next and then fighting, being broken and building yourself up to be stronger… Stretch your perceptions and challenge your understanding… [and] desire to create something new whilst learning from the old.

Oh, and ignore the little ****** inside that tells you that you can’t.

Cass is a welcome example of a TV hero with disabilities.

Like most TV shows, Doctor Who doesn’t often present physical disabilities in a positive light. For the most part, it follows the old literary trope that physical “flaws” symbolize moral or spiritual flaws. Only last week, the Doctor tossed the villainous Davros out of his wheelchair!

In 2014, the BBC announced what it called an “ambitious plan” to quadruple its onscreen representation of disabled people. But, as film critic Scott Jordan Harris argues, the Beeb’s plans “sound more impressive than they are. Just 1.2 per cent of the people on BBC television are disabled. Quadrupling that figure will only take it to 5 per cent,” which will still grossly underrepresent people with disabilities in the British population (18%).

Matters are no better on this side of the pond. In 2010, a Screen Actors Guild report found that “scripted characters with disabilities… represent only one percent of all scripted series regular characters—six characters out of 587—on the five broadcast networks.”

Given Doctor Who’s format, I doubt Cass will stick around as a series regular. If she survives next week’s episode, though, I hope she’ll show up again sometime. She’s a compelling character, and she illustrates the truth that people with disabilities, like everyone else, have valuable, even critical, contributions to make to their communities—a truth people without disabilities often forget. Were it not for Cass’ ability to read lips, the Doctor and the others still might not know what the ghosts were saying! 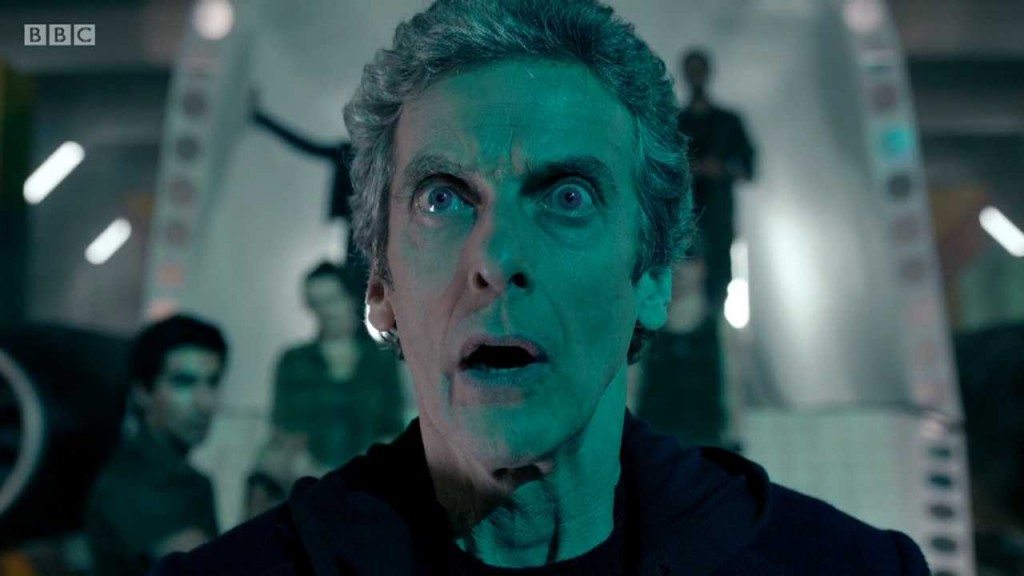 Near the end of “Under the Lake,” the Doctor delivers one of those ecstatic soliloquies that function almost as a personal credo (another time-honored Who tradition, stretching back to the days of William Hartnell himself):

My God. Every time I think it couldn’t get more extraordinary, it surprises me. It’s impossible! I hate it! It’s evil! It’s astonishing! I want to kiss it to death!

So maybe it’s only a mini-soliloquy. But isn’t the Doctor expressing Rudolf Otto’s idea of the Holy—the mystery that both fascinates and terrifies, that simultaneously repels and attracts? The Doctor knows (or thinks he knows—the conclusion might change everything) that he must destroy the ghosts before they destroy The Drum’s survivors, but he will still be in impassioned awe of them as he does.

The Doctor’s enormous ability to not only tolerate but also embrace mystery drives him in this episode, from the early scene in which he tells Clara he “hasn’t a clue” what the ghosts are—“Isn’t it exciting?” His openness to mystery strikes me as a model for Christians. Not, of course, that Christians would find “evil” in true experiences of holiness—but true holiness can feel unsettling and threatening, which is why we sometimes push it away, desperately seeking to quench the Spirit.

Yes, we believe God has, in Jesus, “made known to us the mystery of his will” (Ephesians 1.9, NRSV). But we haven’t exhausted the mystery of God. A relationship with God leads us deeper into mystery. Every time we think God couldn’t be more extraordinary, God surprises us. We don’t want to kiss our mystery to death, but we do want to enter deeper into the mystery of God’s love which first sought us out and saved us. Don’t we?