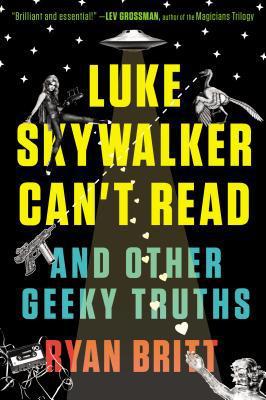 When I brought Ryan Britt’s new book home from our local library, my 8-year-old daughter—who came to Star Wars last year by way of Rebels and now proudly proclaims herself “a bigger Star Wars geek than Dad” (she may be right)—read the bright yellow words on its front cover and declared, with what I found a surprising amount of vehemence, “Yes, he can!”

With only his book’s title, author Ryan Britt had engaged my little girl in in the kind of loud, energetic, often disproportionately passionate argument we geeks relish. Somewhere, I’m sure, he was steepling his fingers and murmuring, “All is proceeding as I have foreseen”—but with a friendly, not a fearsome, grin on his non-scarred-by-Force Lightning face (if his author photo can be believed).

No matter what fandom you count yourself a big geek in—Star Wars or Star Trek, Doctor Who or Sherlock Holmes, superheroes or robots or monster movies—you’re likely to find Britt can give you a run for your quatloos (or Republic credits). A contributor to markets ranging from Tor.com (where much of the Web’s best writing about science fiction and fantasy lives) to the New York Times, Britt here collects old and new essays that find meaning in the minutiae of geeky delights.

Blending sharp cultural criticism with fan autobiography, Britt also acts as a sci-fi Chaucer, taking us on a pilgrimage to landmarks of his growth as a geek, from Barbarella (the trashy Jane Fonda flick Britt says taught him how “to parse out the good from the bad, the low-hanging fruit from the potential for intellectual and emotional growth” in pop fiction) to Ron Moore’s reimagined Battlestar Galactica—which led him to wonder whether he’d wake up in a new body when he was almost pushed off a roof at a Brooklyn “underwear party”—with plenty of fascinating stops along the way.

Britt organizes his memories and musings in chapters with extra-creative titles—my favorite title is “Imagine There’s No Frodo (I Wonder If You Can)”—but this structure doesn’t stop him from gleefully bouncing around from one nerdy passion to another. He is eclectic but never disorganized. His quick asides, nerdy namedrops and frequently very funny footnotes (like the one that wonders what would happen if Hayden Christensen were digitally inserted into the final scenes of The Wizard of Oz or Casablanca) all advance his arguments, as well as the book’s overall thesis: All this nerdy stuff that “doesn’t really matter” really matters, so someone’s got to take it seriously.

Fight the Empire—Read a Book!

The book’s title essay, the one that got my daughter’s dander up is a great example of Britt in action. His point isn’t that people are incapable of decoding written texts in the Galaxy Far, Far Away (although we don’t see them doing so, beyond tractor beam instruction labels and text messages from R2-D2), but that they generally don’t because they don’t need to. The heroes, villains, and scoundrels of George Lucas’ space saga are functionally illiterate: They read just enough to get by, but don’t value reading as a worthwhile pursuit in and of itself.

In a way, Star Wars presents a way we’d all get by if widespread illiteracy actually became a fact of life. In our own culture, pictograms and emojis often replace words on traffic signs, on restroom doors, in texts, etc. The buttons being pressed by the Death Star control-room workers might not even be letters at all. They might be pictograms representing different functions, functions like “death ray blast” and “trash compact.” Plus, how could those guys read anything in those helmets anyway?

Britt goes on to contend the lack of literature and literacy in the Star Wars universe is one reason it never reaches a state of Star Peace. The people simply aren’t well-read. Or any-read. A “decadent and dulling culture [marked by] dangerous laziness” conquered them—and could conquer us—with no help from the Dark Side needed.

Britt makes such connections between fictional worlds and the real one look easy, but clearly he’s given each of the cases he makes a lot of thought. Something in every one of his essays is likely to make you think, too—and you’ll have a great time doing it.

For instance: I found myself thinking Britt is demonstrably wrong regarding literacy in the other big “Star” franchise, Star Trek. Britt claims Trek is as much of a “downer… in relationship to the future of literacy” as is The Hunger Games. But Starfleet personnel and their enemies seem particularly well-read. As Britt himself points out in a later essay, “Kirk and Spock are quoting Dickens—specifically A Tale of Two Cities—throughout [Star Trek II: The Wrath of Khan], and Khan is quoting Melville’s Moby-Dick.” A century later, Picard knows Shakespeare backward and forward—I don’t think that big folio in his ready room is just for show—and has read and reread all those Dixon Hill novels he recreates on the holodeck, just as Data has read—or has at least downloaded—all the Sherlock Holmes stories. On Deep Space Nine, Jake Sisko aspires to be a fiction writer and a journalist, following the career path of no less a literary luminary than Ernest Hemingway. The Federation’s very existence helps prove Britt’s larger point: Where people read, society flourishes. So don’t tell me literacy in the Star Trek future is a lost cause!

Luke Skywalker Can’t Read is one of the most entertaining books I’ve read recently. Since you’re reading this blog, you’ll probably find yourself nodding in agreement, sighing in disagreement, and laughing out loud as much as I did. This book is all those long conversations you have with your best geek friends, in softcover.

Long-time genre fans won’t find too many new nuggets of information here, but Britt is aiming for a larger audience than the geeks, hoping to persuade them that the day is close, if not already here, when the geek/non-geek division is essentially meaningless. And if you’re bothered by cursing, be aware there’s a moderate amount in the book. (I wouldn’t actually let my daughter read this for a while).

But overall, I highly recommend Luke Skywalker Can’t Read as a fast and fun, light-hearted but earnest invitation to embrace geek culture—loudly, energetically, and sometimes even with disproportionate passion.

Who knows? As Britt suggests, our present and future may depend on it.