With Lent’s penance now just hours away, confession is in order. Here’s a mea culpa from me: When I was still preaching weekly, I sometimes relied too heavily on preachers’ magazines.

I never lifted another preacher’s sermon from those magazines’ pages or websites and presented it as my own.  And whenever I quoted another author, I always gave oral credit.

My preaching sin wasn’t plagiarism—it was recklessness with my sources. Whether from lack of inspiration or lack of time (or both), some sermons ended up little more than a mishmash of passages from other people’s writing: catchy quotes, amusing anecdotes, on-point illustrations of a theme, all threaded on the skewer of my understanding of the morning’s Scripture.

I was never proud of these sermonic shish kebabs, but didn’t fully appreciate all that was wrong with them until one Sunday when a man asked what I thought about the novel I’d quoted in that morning’s message. It was one of his all-time favorites and he hoped we could discuss its deeper meanings. I could only admit I’d never actually read the book; I’d found the passage in a magazine. “Oh!” he laughed, good-naturedly. “And here I thought you were actually well-read!” 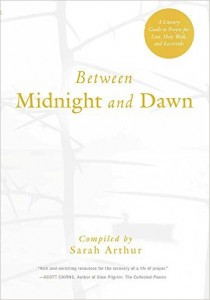 I make my confession to show I understand the difference between what I was doing—ransacking other writers’ work for sermon illustrations—and what best-selling author and friend of The Sci-Fi Christian Sarah Arthur has done in her new book, Between Midnight and Dawn: A Literary Guide to Prayer for Lent, Holy Week, and Eastertide.

The book’s front cover and title page claim she “compiled” it, but she’s done more than that. She has carefully and lovingly curated this collection, arranging a treasury of poems and excerpts from fiction in ways that spotlight each contribution’s beauty, both as its own piece of art and in relationship to others. This book leaves no doubt Arthur really is well-read. She has not only read and reread but also lived with and loved each of these texts for a long time before sharing them with us. Like a scribe trained for the kingdom of heaven, she brings out treasures new and old to illuminate the mysteries of God’s saving ways.

Like her previous two literary devotional guides—At the Still Point, which covers the church’s long, green summer of Ordinary Time; and Light upon Light, which encompasses Advent, Christmas and Epiphany—Between Midnight and Dawn offers, in each chapter, a simple order of worship for individual use (which could easily be adapted for small groups, whether Bible studies or book clubs), organized around seasonally appropriate themes. Ash Wednesday, for example, focuses on “Wearing Mortality;” the weeks of Lent bring such emphases as “The Way of Negation” and “Secret Terrors.” Each day of Holy Week has its own theme, from “The Jubilant Crowd” on Palm Sunday to the title theme, “Between Midnight and Dawn,” on Holy Saturday. Easter Sunday’s theme, “Recalled to Life,” launches a seven-week seasonal journey from “The Place of Consolation” to “Into God’s Rest.”

Arthur presumes readers will have the Bible in one hand and this book in the other. She lists suggested Scriptures for each week, but the poems and prose excerpts she has artfully chosen are the book’s heart.

Some of these texts are overtly Christian—the eighth-century Anglo-Saxon poem “The Dream of the Rood,” for instance, or the many prayer-poems from such authors as George Herbert, John Donne, and Christina Rosetti.

Others use Christian language and imagery in fresh and surprising ways.

Still other texts, primarily the longer, prose pieces, have little or no explicitly Christian content, but provoke reflection on faith and life. Arthur’s deft introductions to each longer excerpt orient and intrigue readers without taking the joy of discovery from them.

There’s no science fiction in these pages, but fantasy makes a few brief appearances. Both Frances Hodgson Burnett’s beloved novel The Secret Garden (which, if not a full-fledged fantasy, at least brushes up against the genre now and then) and George MacDonald’s fairy tale The Light Princess show how even tales of the imaginary and the impossible can point to truths about God’s love.

Voices of the Dawn

I thought Between Midnight and Dawn feels a little less diverse than Arthur’s other two literary prayer guides; white European and Anglo-American voices seem to dominate. I also regret that Arthur didn’t include any of her own writing, as she did in Light upon Light. I’m sure she wanted to represent as many other writers as possible, but I wish she’d reserved some small space, beyond the first few, eloquent pages of her introduction, for her work.

Overall, Between Midnight and Dawn is a beautiful contribution to the church’s devotional life, and I look forward to spending more time with it over the next several months. Thank God (literally) there are well-read lovers of the written word in our midst, who really know how to sift literature’s riches for much more than mere illustrations—who can train us to hear (as Arthur writes in her introduction) voices calling us to raise our eyes and look to the east for God’s dawn.

Disclaimer: I received a free review copy from  Paraclete Press, www.paracletepress.com. I was not required to write a positive review, and all opinions expressed are my own.

Read my review of Sarah Arthur’s Light upon Light.